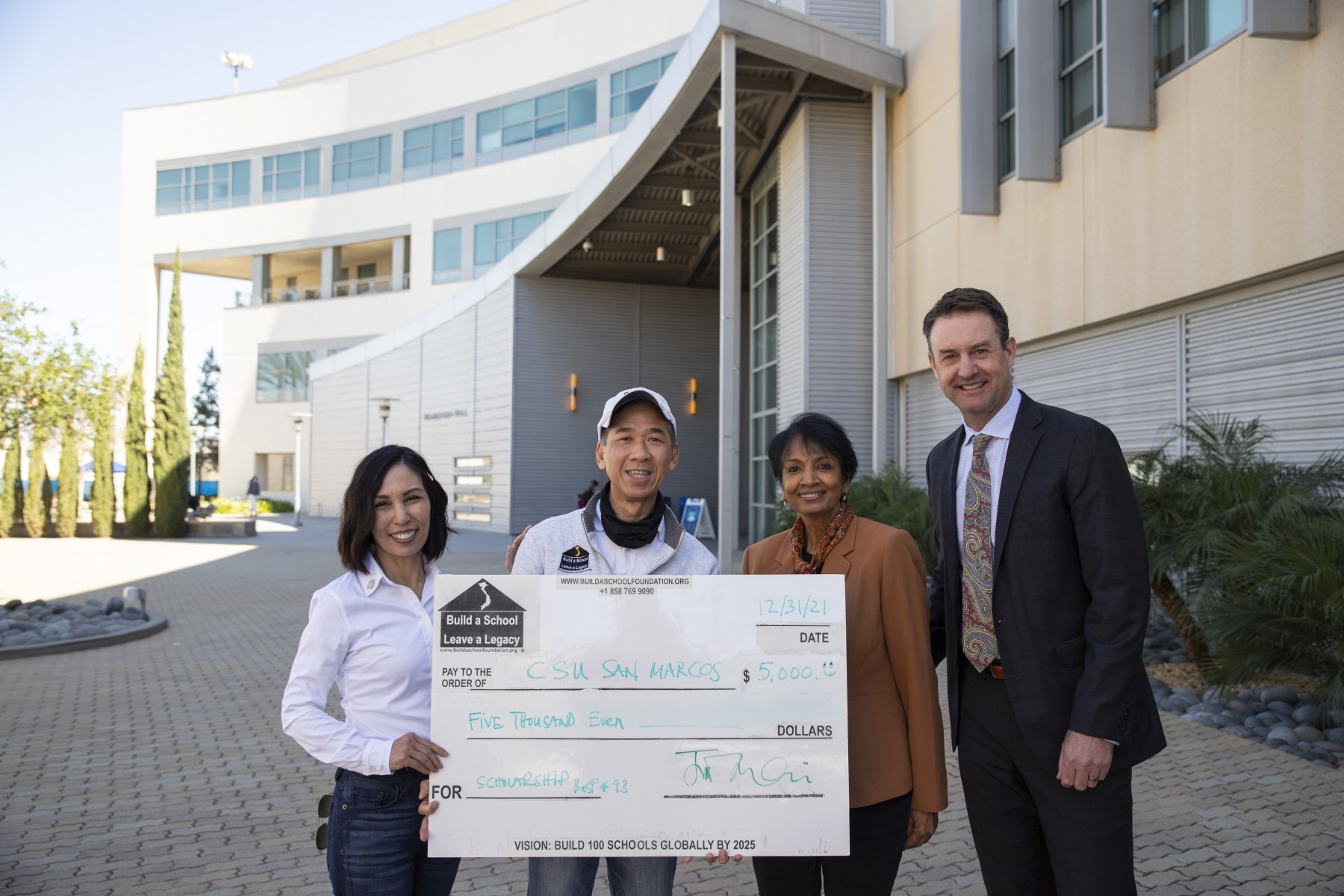 Lily and Jimmy Thai present a check to Raj Pillai, professor of management and executive director of CSUSM CLIMB, and Ben Cherry, the interim dean of the College of Business Administration. Jimmy graduated from the MBA program in 2000. Photo by Andrew Reed.

Jimmy Thai wants to do his part to motivate and help the next generation of leaders make a positive impact on society.

Thai, who earned his MBA from Cal State San Marcos in 2000, is doing that in myriad ways. That includes recently establishing the CSUSM CLIMB Compassionate Leadership Experience Awards program. Thai and his wife, Lily, have already contributed $5,000 to establish the program and intend to contribute $5,000 per year for the next five years through their Build a School Foundation, Inc.

“When Jimmy was a student in my MBA leadership class, I saw the wonderful potential in him and teased him that when he made his millions, he should come back and support us,” said Raj Pillai, a professor of management and the executive director of CLIMB. “I am so glad that he is doing so in such a unique way through his Compassionate Leadership grant to CLIMB, which will be used by students to help the less fortunate in our community and develop their leadership skills in the process.”

CLIMB, which stands for the Center for Leadership Innovation and Mentorship Building, was established by the College of Business Administration in 2004 with the goal of serving “the leadership development needs of the surrounding community through innovative research and collaboration with various internal and external constituencies.”

Thai will be the featured guest for CLIMB’s Speaker Series event on April 1 when he presents a talk titled “Compassionate Leadership: Overcoming Adversity and Transforming Lives.”

Thai certainly knows about overcoming adversity. He tried 15 times to leave his native Vietnam during and after the war before finally making it to the United States at age 20.

“Looking back, I did not really see anything special about it,” Thai said of the perseverance he showed. “For me, growing up during the Vietnam War right from birth until the fall of Saigon in '75, that 10 years I grew up during the war. And then after the fall of Saigon, I lived with communists for 10 years. So to me, struggle and hardship and going to bed hungry seemed to be the norm. I didn't really think much about hardship or struggle. I didn't know any better.

“A lot of people don't know much about the Vietnamese refugees – the boat people – because it's been four or five decades already. Half of us didn't make it. Half of us call the Pacific Ocean our home for good. That's why I've always considered myself lucky. As strange as it sounds, I still consider myself a lucky one.”

Despite speaking no English when he arrived, Thai enrolled almost immediately at Miramar College before transferring to UC San Diego, where he earned a bachelor’s in electrical engineering. He got his master’s in electrical engineering at Cal State Fullerton before deciding to pursue his MBA. He chose CSUSM both for its proximity to his home in North County and the fact that he could complete the program in 18 months rather than taking two full years.

The lessons Thai learned at CSUSM are still making an impact more than two decades later.

“I still have all the textbooks from my MBA program, and I use them quite a bit,” he said. “Even when I learned how to trade stock, I prefer the finance textbook from that class just because they talk a lot about stock options and how to do a lot of fancy stock option derivatives and things like that. But the leadership material is the one I use the most. It really fit in with my passion to lead and to change organizations and also to live up to being a leader.”

Thai and Lily founded the Build a School Foundation, Inc., a nonprofit that provides educational opportunities for poor children by funding classroom constructions, school-related infrastructures, teaching and learning equipment, scholarships and basic health care needs. Founded in 2015 with a goal to build 100 schools by 2025, the organization has completed 94 with three others under construction, and it’s already looking toward Phase 2.

As part of his work with the Build a School Foundation, Inc., Thai wants to continue helping tomorrow’s leaders.

“Just be useful and be kind,” he said. “Have a career, find something that you can be useful to help yourself. And when you have that ability, then just be kind and help other people who are less fortunate than you.”