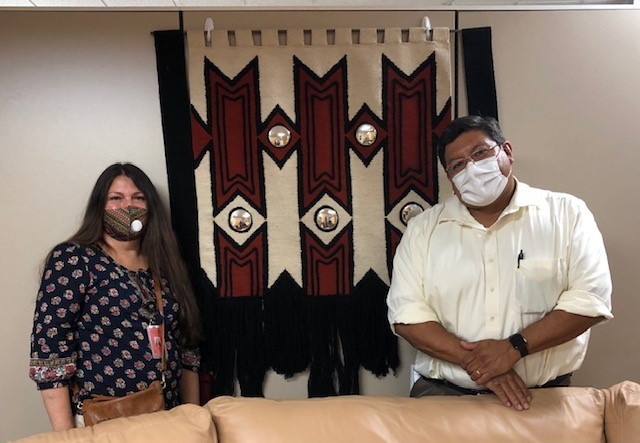 The question might have been considered predictable, coming as it did at the start of a course in American Indian studies. After the professor, Joely Proudfit, proudly declared her Native heritage, she asked the students whether any of them were Native as well.

But Peery White, sitting in one of her first classes as an older student at Cal State San Marcos, nearly keeled over out of shock.

“Where I come from, you don’t talk about that,” White said. “You don’t say that you’re Native, you’re not proud of it. It’s something that’s disgraceful.”

White grew up in Oklahoma as a member of the Peoria Tribe of Indians. Her father, she says, was 65 years old before she ever heard him acknowledge that he was Native. When White was born, her grandmother cried because she had the brown eyes and brown hair of the Native side of the family.

“The implication was that it was shameful,” White said. “In Oklahoma, there’s a lot of historical trauma, passed down from generation to generation.”

White is determined to break the cycle – to be proud of the person she is and the people she comes from. During her time at CSUSM, where she studied medical anthropology, she worked as an undergraduate researcher for Indian Health Council, a consortium of nine North County tribes dedicated to the betterment of Indian health.

After graduating in 2017, she proceeded to a Master of Public Health program at UC San Diego, and since last summer she has served as a contract epidemiologist for San Diego County, one of hundreds of temporary employees hired to help deal with the COVID-19 surge. At her request, one of her primary duties is to be the county liaison to the local tribes.

Since there are 18 federally recognized tribes in the county alone, accounting for the largest concentration of tribal nations in the lower United States, that is no small task.

“It’s about teaching people to respect tribal sovereignty so that the tribes have streamlined access to COVID data and are empowered to make decisions the way they see fit,” White said. “More than that, it’s about teaching county officials how to talk to the tribes. We did a tribal nations telebriefing recently, and it was the first time that a blessing by a local tribal elder has ever been given. I was like, ‘How is that possible?’

“I understand what the county wants, and they have great intentions. I’m just trying to get them to shift their view and, in a respectful, culturally appropriate way, be able to meet what they want and what the tribes want.”

White has been told by colleagues that she’s occupying a tribal liaison role that hasn’t been filled in decades – a reality that’s unacceptable to many in the Native community.

“The tribal liaison position must be a permanent one, especially given the large population of tribal nations that exists in the county,” said Proudfit, director of the California Indian Culture and Sovereignty Center at CSUSM and chair of the university’s American Indian studies department.

“This position can mean the difference between life and death, so let us always be prepared to serve all populations, especially some of the most vulnerable. Peery has the personal drive and professional and cultural expertise to serve as an effective tribal liaison. I couldn’t be prouder of her.”

The road that White, 46, took to her present station was the farthest thing from smooth and traditional. Her parents divorced when she was young, and she spent much of her childhood shuttling back and forth between her native Oklahoma and Southern California, where her dad moved. She was a good student but a rebellious teenager, and feeling that she didn’t fit in at Carlsbad High School, she eventually dropped out.

That decision could have led to a very different life outcome, but White never lost her personal drive to improve and educate herself. When her now ex-husband, a military man, was stationed in Virginia, she enrolled at a nearby community college. Everywhere the family went, even as she raised two boys, White found a way to take classes on the side. She did this for two decades.

“I’ve always tried to do something to better myself, and I love going to school,” she said. “I wish I wouldn’t have dragged it out for 20 years, but hey, we each have our own path.”

In 2013, divorced, back living in North County and her sons grown, White finally had the opportunity to pursue her education single-mindedly. She intended to study biology at CSUSM and pursue medical school, but around the same time she started taking American Indian studies courses, she also discovered (through her older sister, Burgundy, a student at UC San Diego) the California Native American Research Center for Health (NARCH), a partnership between local tribal organizations and academic institutions to increase the number of American Indian scientists and reduce health disparities in Native populations.

White almost immediately began conducting research through NARCH and decided that her career path would be not medicine but public health – specifically focusing on indigenous peoples.

“Peery came to our program with a ton of life and academic experience, and with a goal to work with American Indian communities to address health disparities and improve health equity,” said Richard Armenta, a CSUSM kinesiology professor who’s also the co-principal investigator and student research director for NARCH. “I was impressed by her dedication and her strong commitment to make an impact for American Indian communities.”

Through NARCH, White not only gained crucial skills in community-based participatory research that supplemented her classroom learning, but she also built relationships with tribal leaders and community members that are proving invaluable in her current work with the county.

Even as her professional outlook improved, though, White still had to overcome significant adversity in her personal life. When her marriage ended, she had no job, no place to live and about $1,000 in savings. When she wasn’t staying in a hotel, she was crashing in the house of an old high school friend. Her first connection through NARCH was the program coordinator, Geneva Lofton-Fitzsimmons, a member of the La Jolla Band of Luiseño Indians, who helped White find a job in the program when she was a homeless CSUSM student.

“She is basically my adopted grandma here,” said White, who affectionately calls Lofton “Ms. Geneva.” “I’m not sure what I would have done without her.”

White received assistance at CSUSM through the Lee Dixon scholarship for American Indian students, but she still dealt with housing and food insecurity throughout her undergraduate years. She chose UCSD for her master’s program in large part because the university offered her a tribal scholarship.

Her job with the county has finally brought White a degree of financial independence, though her contract is due to expire this summer. She’s hoping that county leaders will appreciate the value of her tribal liaison duties and make the position permanent, or perhaps she’ll move back to Oklahoma, where her sons (now 26 and 24) work with their father in a family-owned plumbing company.

Years after Proudfit taught her that there’s no reason to be ashamed of her identity, however, White knows that she’ll spend the rest of her life serving Native communities with pride. When she was invited last fall to be the guest speaker at a COVID-19 meeting for all county staff members, she introduced herself in her Native language.

“I couldn’t believe it myself,” she admitted. “It was like I was doing something taboo against my family. But now I’m willing to shout it from the rooftop: We’re here. I’m here.”