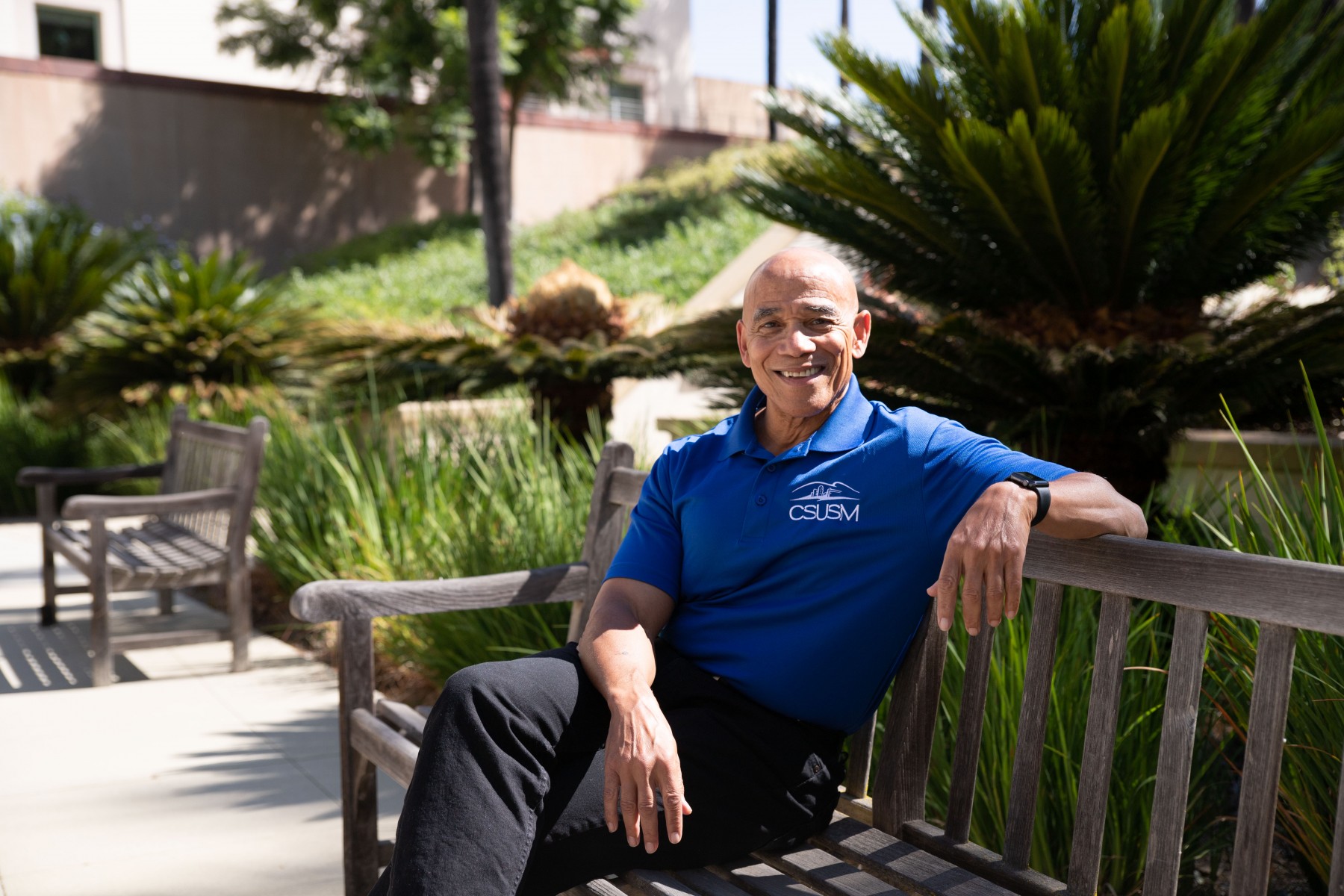 Leon Wyden is in his first semester as vice president of Finance and Administrative Services. He started in late May. Photo by Andrew Reed

When Cal State San Marcos colleagues see Leon Wyden strolling through Craven Hall as the work day is beginning, few likely know that he already has been awake for several hours.

Wyden rises every morning at precisely 4:20 a.m., and he does so without the aid of a blaring alarm clock. If that weren’t striking enough, each weekday he goes to the Crunch Fitness gym in San Marcos by the time it opens at 5 for a long, vigorous workout composed of cardio training and weightlifting. He hits the gym on both weekend days as well, but that’s not until 7 – only because Crunch doesn’t open until then on Saturdays and Sundays.

“I’m trying to talk the management to open at 5 on weekends,” Wyden said with a smile. “Just give me a key. I’ll open for you.”

It’s that level of self-discipline and work ethic that Wyden is bringing to his role as one of the new administrative leaders at CSUSM. In late May, he started his position as the vice president of Finance and Administrative Services, succeeding interim VP Mary Stephens and before that Neal Hoss, who served in the job for five years before his retirement last fall.

As the head of FAS, Wyden oversees a division that is composed of 240 employees and six subdivisions: administration, business and financial services, facilities development and management, human resources, the university police department, and the CSUSM Corporation.

“A lot of what I do day to day is operational,” he said. “I pay attention to what’s going on on the finance side. But there’s also a building side, a budget side, a human resources side. And then there’s public safety as well.”

Wyden comes to CSUSM from Frostburg State University in Maryland, where he was vice president for Administration and Finance, overseeing a division that totaled almost 400 employees. The position at Frostburg was the fifth in a series of finance-related stints at universities throughout the East Coast and Midwest for Wyden, who hails from Detroit and is a certified public accountant.

The move to California represented a welcome departure for him and his wife, Karen. The couple is renting a San Marcos home only a few miles from campus.

“When I was a kid, my family would come out west to visit from time to time, and I just loved the area,” Wyden said. “Then, during my professional career, most of the places that I worked had operations in California, so I spent a lot of time out here. When this opening became available, it was one of the things that I thought that I always wanted to do, and here was my opportunity. So far, so good.”

After spending much of the summer acclimating to his new colleagues and surroundings – he went floor by floor through every building at CSUSM with employees from Facilities Development and Management, one of the departments he’s in charge of – Wyden has been busy tackling a host of projects, from return-to-campus and COVID-19 vaccine and testing protocols to telecommuting to reimagining how space is used on campus. Since the university’s physical structures fall under his job description, he’s excited about the prospect of a new integrated sciences and engineering building – the Chancellor’s Office recently allocated $2 million to CSUSM to begin planning for it – and new student housing that’s under construction next to the Extended Learning building.

But Wyden would like to see more, and he hopes to be of assistance in accelerating the process.

“We still need some on-campus housing,” he said. “I think we could double the housing capacity (currently 1,547) and fill it fairly easily. I’ll be talking with the system about what we need to do to kick off housing projects on this campus. But going along with that, we’ve got to have the appropriate dining services for our students. Dining services had its own building at Frostburg; it was about 35,000 square feet, kitchen, lots of stations. We don’t have a lot of resources in that area.”

Like about half of those studying at CSUSM, Wyden is a first-generation college student. The son of parents from rural Tennessee who moved to Detroit as part of the Great Migration so his father could work in a Ford auto factory, Wyden was indoctrinated with the belief that education was a “golden key.” His mom and dad weren’t the only ones hammering home that message, either – it was the next-door neighbors who sent three daughters to college, it was the church, it was the community at large.

“I think my background gives me a great perspective on what our students are going through,” Wyden said. “Because my parents didn’t have the college experience, they couldn’t help me. I was very much on my own. There are so many impediments to learning if you’re a first-generation kid. For so many of them, this is their way out, and I’m happy to do my part to help them on their journey.”

Misael Diaz, an assistant professor of Art, Media and Design at Cal State San Marcos, has been named a winner of one of the most prestigious awards that artists can receive in San Diego. Diaz is one …
Read more