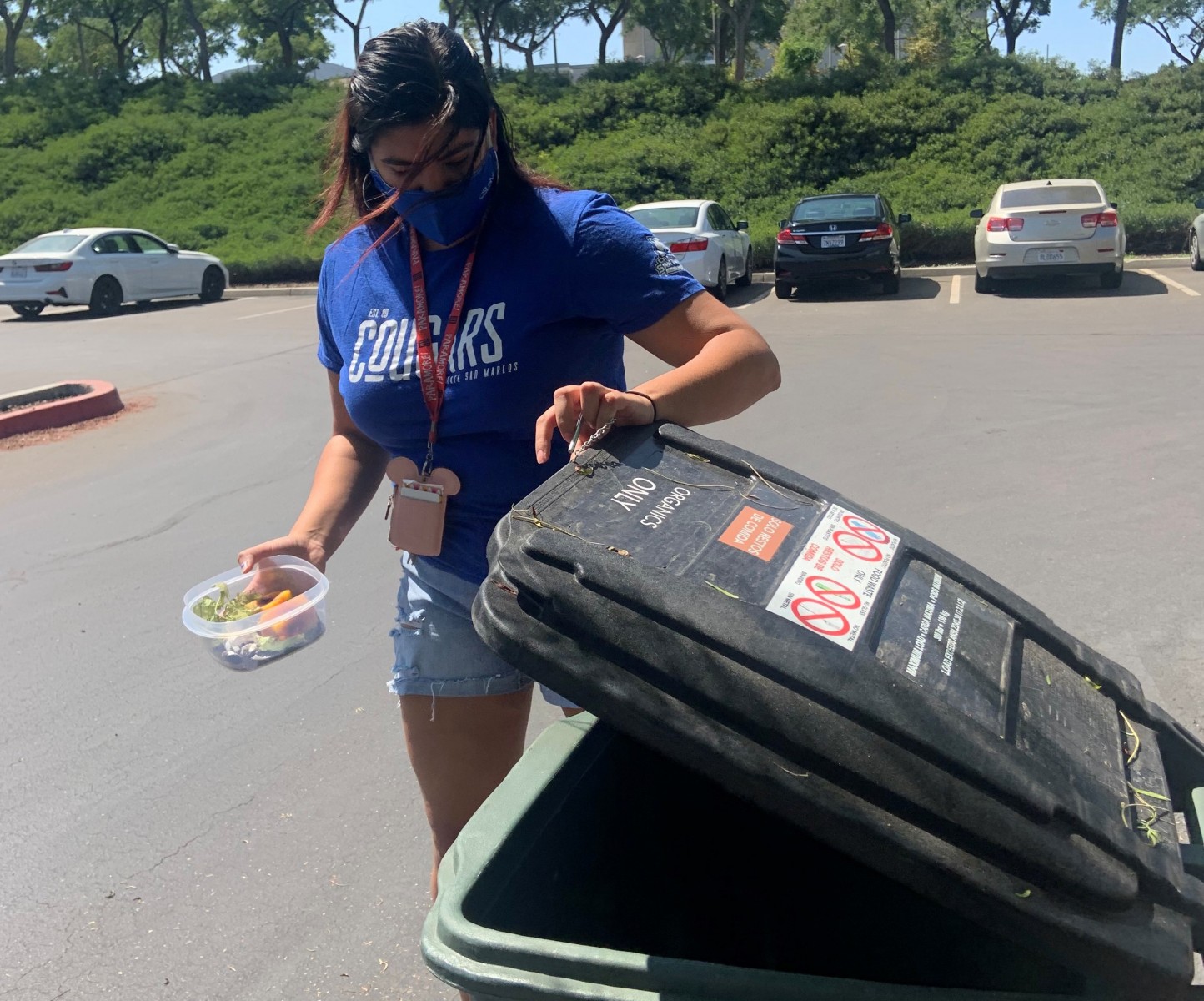 Student Miranda Arias uses the composting bin outside of the UVA.

Plans to start the program at the University Student Union, home to most campus dining services, came to a screeching halt. No food production on campus meant no food waste to compost. 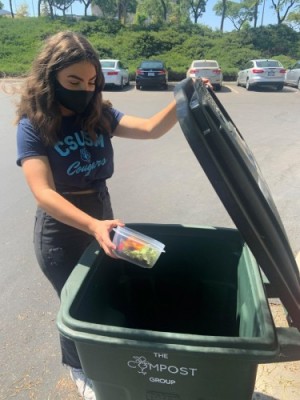 But at one of Hebert’s Journey to Zero Waste meetings, discussion started about the possibility of bringing the composting program to the University Village Apartments, which continued to house students during the spring and summer. With help from Erin Jonesrebandt, a resident director of Housing & Residential Education for UVA, Hebert’s team got a handful of residents on board and stationed a composting bin outside of Building B at UVA.

“It's a big lift for the campus to say that we're doing this, especially during COVID,” said Hebert, the university's zero waste program coordinator. “Even though it’s a small program running over at UVA, it’s an important step.”

Hebert noted that they were able to successfully launch through a partnership with The Compost Group (TCG), a North County group that aims to provide local communities with sustainable composting processing solutions.

"TCG launched a small operation on campus in March, and that has provided us with the opportunity to start a small program prior to EDCO providing widescale service," said Hebert, who added that the program with TCG was launched by the College of Business Administration and the Sustainability department.

CSUSM, which has a sustainability goal of zero waste by 2025, has for several years had pre-consumer composting, which includes fruit and vegetable clippings from dining services and coffee grounds from Starbucks and Crash’s Cafe.

Implementing a post-consumer program is part of the university’s effort to reduce organic waste to 50% of 2014 rates this year and 75% by 2025, as mandated by California Assembly Bill 1383. Post-consumer organic waste includes any cooked food scraps and can include other compostable items such as plates, utensils and napkins.

When the program launched at UVA in July, all residents were in Building B, which is why the container is located there. Now that additional students are at UVA for the fall semester, Hebert is hoping more will be inspired to participate in the program by using the composting container to dispose their food waste.

“Right now, we’re just keeping it to that one container,” said Hebert, who added that the campus-wide post-consumer program will launch when more students return to campus. “But we’re hoping that eventually we’ll need to place some other containers at UVA.”

Learn more about CSUSM’s Journey to Zero Waste online or by emailing zerowaste@csusm.edu.

Melissa Reyes has always had a keen interest in the environment. It stems from her upbringing in the Imperial Valley, which relies heavily on the agricultural industry.Reyes has multiple family …
Read more

As Cal State San Marcos faculty and staff continue to go above and beyond on behalf of students and the campus community during the COVID-19 pandemic, we’re pleased to highlight some of the campus …
Read more
NewsCenter