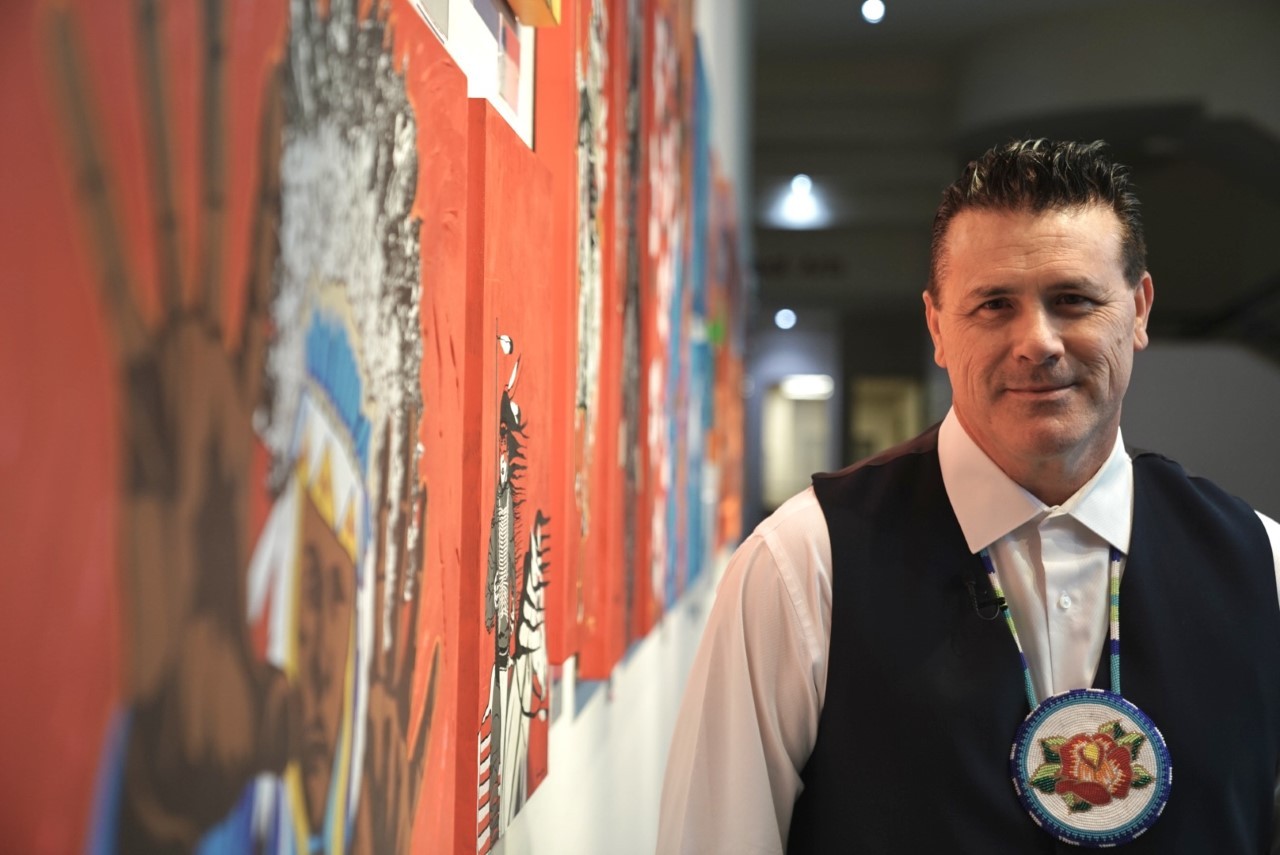 Eric Tippeconnic, a professor in the American Indian studies department, is the artist behind a new exhibit on display in the CSUSM library.

The practice is especially important in a state like California – which is home to 110 federally recognized tribes, the most of any state – and at a university like Cal State San Marcos, which is located on the traditional territory of the Luiseňo/Payómkawichum people.

Not long after Eric Tippeconnic was hired as a tenure-track professor in the American Indian studies department in summer 2020, he was approached by Toni Olivas, CSUSM’s engagement and inclusion librarian, who’s in charge of the library’s Context Exhibit Series. Olivas knew that Tippeconnic, besides being an expert in Native history, was a painter of national renown.

Encouraged by Olivas, Tippeconnic came up with the idea of an art exhibit that would serve as a visual land acknowledgment.

“Land acknowledgements are vital,” said Tippeconnic, an enrolled member of the Comanche nation. “Native history largely has been erased, so the land acknowledgement is one way for us as a society to recognize the peoples who have belonged to this land since time immemorial. It’s a way to pause and reflect on whose land we are walking on and provide them with the proper respect.

“You can do the same thing visually: ‘We’ve said the words, we’ve acknowledged it, now let’s celebrate the resiliency of this land's original inhabitants through imagery.' "

That was the inspiration for the art that’s now on display on the third floor of the CSUSM library as part of the spring Context Exhibit Series. The collection, titled “Our Existence Is Our Resistance” (which borrows from the motto of CSUSM’s American Indian studies department), contains 12 acrylic paintings on canvas by Tippeconnic that tell a story of resiliency and pride in multi-layered Native American cultures that are deeply rooted in honor and tradition. The title, Tippeconnic says, is an allusion to federal and state policies that decimated the numbers of Native peoples in the 19th century. By some estimates, between 1849 and 1900, the Native population in California declined from about a million to only 17,000.

“The very fact that these people are still here and still celebrating their culture and passing on their traditions through their song and dance is a testament to their resilience,” Tippeconnic said. 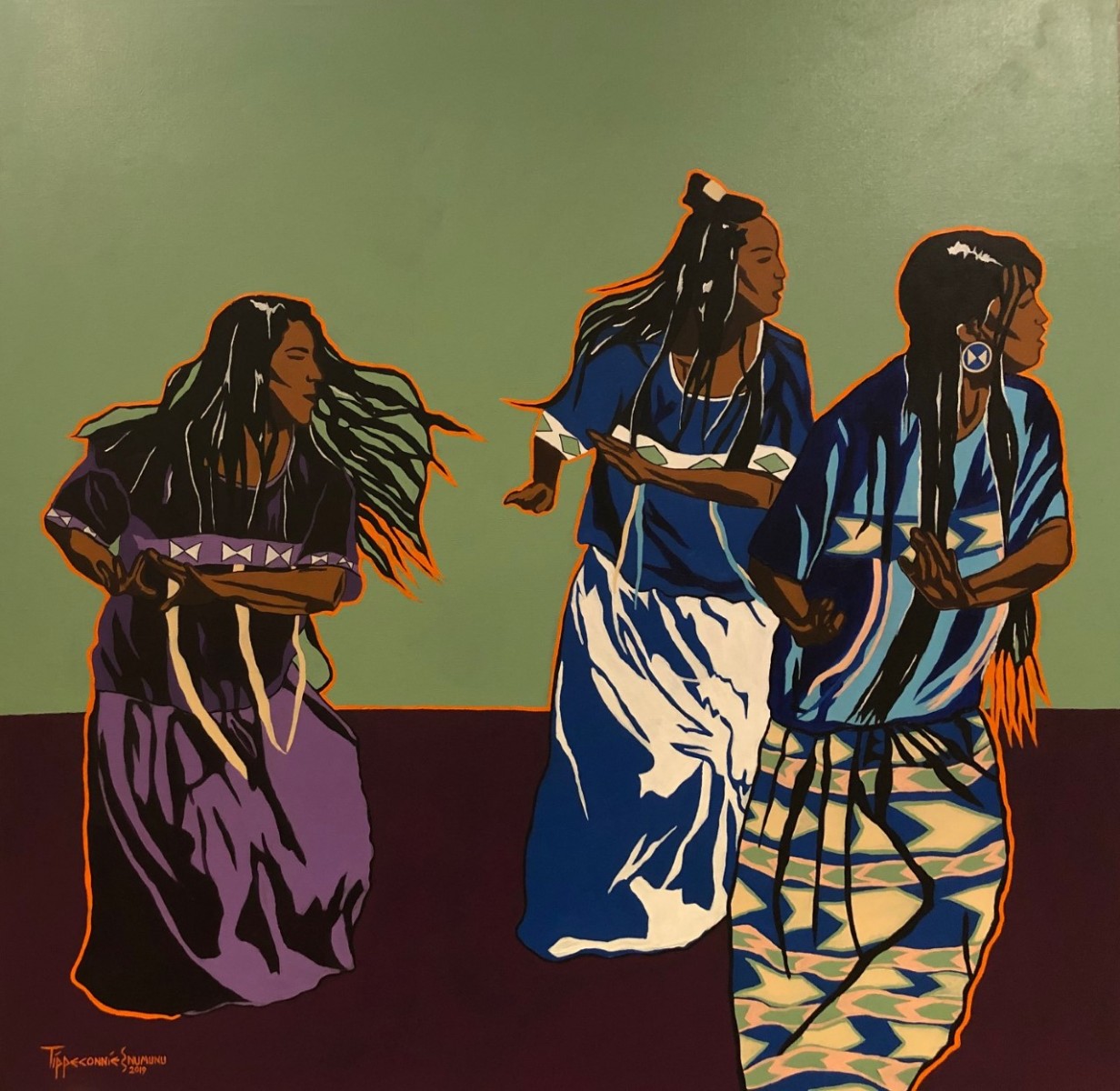 The painting “California Girls” is a tribute to CSUSM alumna Mejaumi Rosales, who’s depicted dancing with her two sisters.

The exhibit is both in person and virtual, and will remain on display through July 31. The library will host an event to celebrate the artwork on May 4 at 6 p.m. in the Kellogg Reading Room (it also will be streamed live). Tippeconnic will speak at the event along with President Ellen Neufeldt and Joely Proudfit, chair of American Indian studies.

“Our department is so fortunate to have Eric’s work featured so prominently for the entire campus to share in the vibrant, contemporary depiction of living cultures of Southern California Indian people, bringing our department motto to life,” Proudfit said.

Tippeconnic created nine of the 12 paintings for this exhibit specifically. Almost all of them feature Native people either bird dancing or bird singing, which are traditional rituals performed by tribe members in the state.

Two of the subjects in the artwork are current or former CSUSM students. “California Girls” is a tribute to alumna Mejaumi Rosales, who’s depicted dancing with her two sisters. Tippeconnic remembers meeting Rosales during his first day on campus as a lecturer several years ago. Tippeconnic was lost, both in terms of where to go on campus and how to use the classroom technology, and Rosales helped him on both fronts, in the process displaying a level of kindness and collegiality that stuck with Tippeconnic.

“Over the years, we’ve developed a really good relationship, and since she has graduated, I’ve been able to watch her and her young family grow,” he said of Rosales, a member of the Torres Martinez Desert Cahuilla Indians. “To me, they're the ideal young Native family. Mejaumi is not only leading by example by procuring a college education that will benefit her Native community, but she has introduced her children to the dance arena."

Two of the paintings, “California Soul” and “California Sun,” portray Kiara Love Flores, an American Indian studies major who’s active in the American Indian Student Alliance (AISA) at CSUSM. Tippeconnic said Flores is representative of many students in the department in that she’s Native not just by blood but by behavior – by actively participating in her culture and passing traditions on to her younger siblings.

Flores also assisted Tippeconnic by posing in her tribal regalia for photos taken on campus by Ilianna Ramirez, the AISA president, and then sending them to him for inspiration with the paintings.

“The whole exhibit is collaborative,” Tippeconnic said. “I might be the artist, but it wouldn’t be possible without all of these other people.”