It was the home that her parents had built, that she had lived in since third grade, that contained all of the countless memories she had accumulated across the decades.

When that house on Mussey Grade Road in Ramona burned down in the Cedar Fire in 2003, Jennifer Mellow was understandably devastated. In this moment of overwhelming loss, Mellow turned to an activity that has proven to be therapeutic for people throughout history.

She went out and bought a sewing machine and fabric, and she taught herself how to make a quilt.

“It turns out that most people get into quilting because of something upsetting that has happened in their lives – they’ve lost a child, lost a spouse, lost a house, lost a job,” Mellow said. “There’s a comfort in repetitive tasks, and quilting is very, very calming. You do the same thing each step of the way, and if you do it just right, at the end, you have something beautiful that you’ve created.”

Almost 20 years later, Mellow is still working at Cal State San Marcos, where she has been a communication lecturer since 1998. She’s still living on Mussey Grade Road (now with her husband, Mike), where she rebuilt the house on a site that’s so far off the beaten path that Google Maps has trouble navigating there. And she’s still making beautiful things, though she has long since graduated from just that simple sewing machine to an enormous device called a longarm machine that takes up most of her dining room.

Mellow’s first quilt back in 2004 was what’s called a sampler, which is a project that does not repeat the same quilt block within its layout and is common for beginners. Among other symbols, it featured a sailboat to represent San Diego and a house to represent what she had lost.

As her passion developed in the early years, she mostly made quilts to give to friends and family as gifts, but recently she has started keeping more of them, displaying some proudly as wall hangings (she tends not to drape them on beds because her two rescue dogs, Leiloo and Lt. Uhura, might damage them).

Mellow also has been surprised to discover how competitive the hobby can be. Just before the pandemic, one of her quilts was awarded a blue ribbon as the best in its category at the San Diego Quilt Show and was chosen for one of the most prestigious quilt contests in America, the annual competition in Paducah, Ky., home of the National Quilt Museum.

“I always thought that was weird to be a competitive sewer, but it is very competitive,” Mellow said. “Once you make a quilt that you’re really proud of and you think is really beautiful, you kind of want to show it to everyone.”

Mellow’s quilting process begins with an idea and a plan. Say she wants to make a quilt to give to someone for Christmas. Do they like traditional, elegant holiday iconography or more playful things? Do they prefer light or dark colors? The answers to those questions might determine what type of fabric, design and pattern Mellow uses, and what time of year she starts helps decide how elaborate she can get.

The next step is piecing the top of the quilt, which entails assembling and stitching pieces of fabric together, by hand or machine, to make a series of quilt blocks. Then comes the actual quilting, which involves stitching together the three layers of a quilt (the top, batting and backing).

“You can quilt it edge to edge, which is just one pattern that repeats over and over again,” Mellow said. “Or you can do it where each block has a different design placed in it. Sometimes there are rows between the rows – that’s called sashing.

“Everything from the color to the fabric to the design says something, and when someone makes you a handmade gift, they put a lot of love into that. When I make a quilt specifically for someone, I think about that person every step of the way.”

During the school year, Mellow has time to quilt only on the weekends, but in the summer, she does it for about five hours a day. The amount of time each quilt takes depends on the complexity; the more elaborate ones can require three months or longer. She has lost track of how many quilts she has made over the years.

Mellow says there’s a small but dedicated community of quilters at CSUSM with whom she commiserates about the craft. She displays her work on an Instagram page called Sew Mellow Quilting that she hopes to convert into more of a business when she retires from teaching.

“I'm not quite sure where this is going to lead,” she said. “I do see myself quilting for a really long time. It's an adventure. After all these years, the thing I still like about it is I learn something new each time.

“I didn't think it would get me so carried away as it has, but I've enjoyed every minute of the journey.” 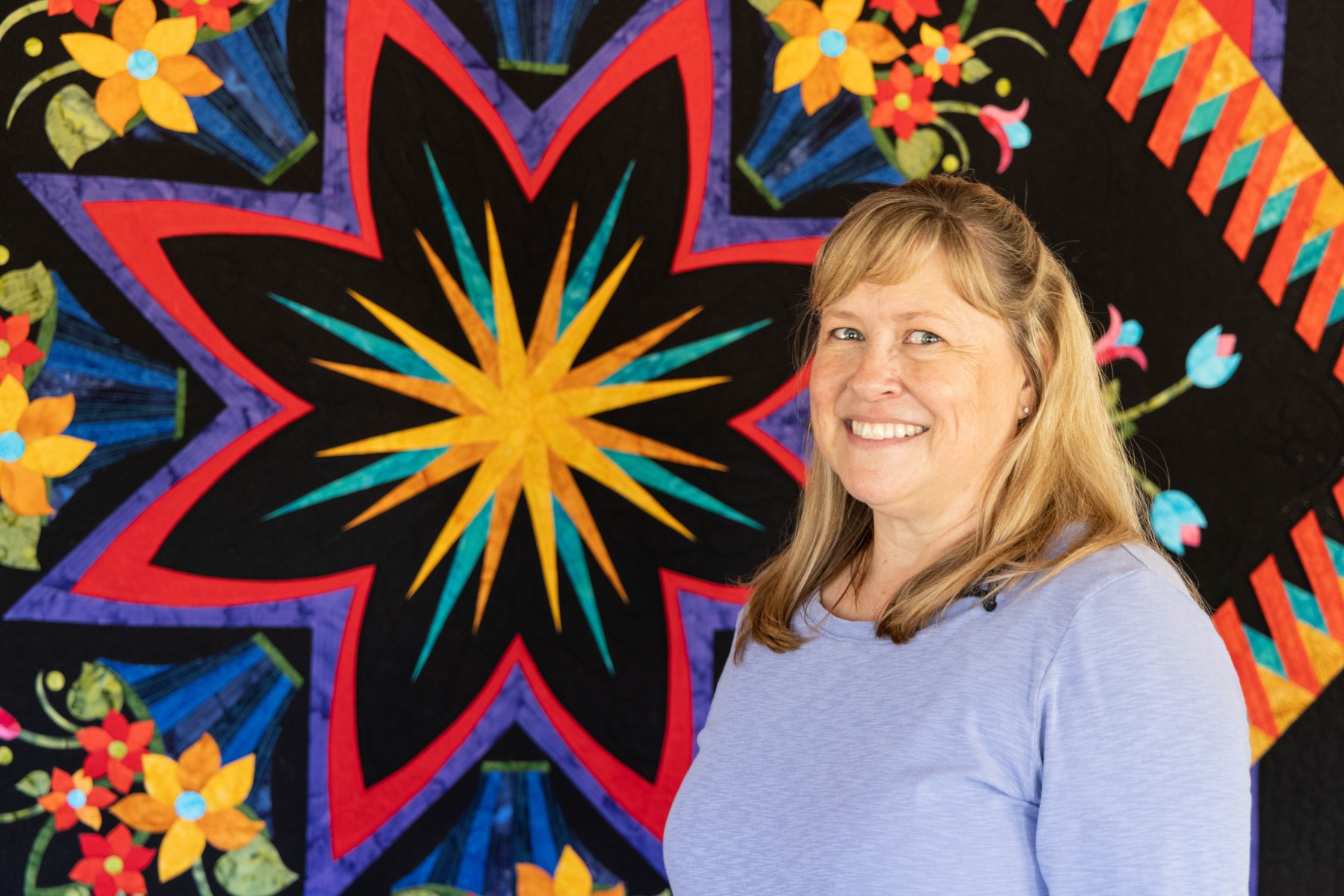 Jennifer Mellow in front of the quilt that was accepted into one of the most prestigious quilting contests in the country. Photo by Alicia Lores