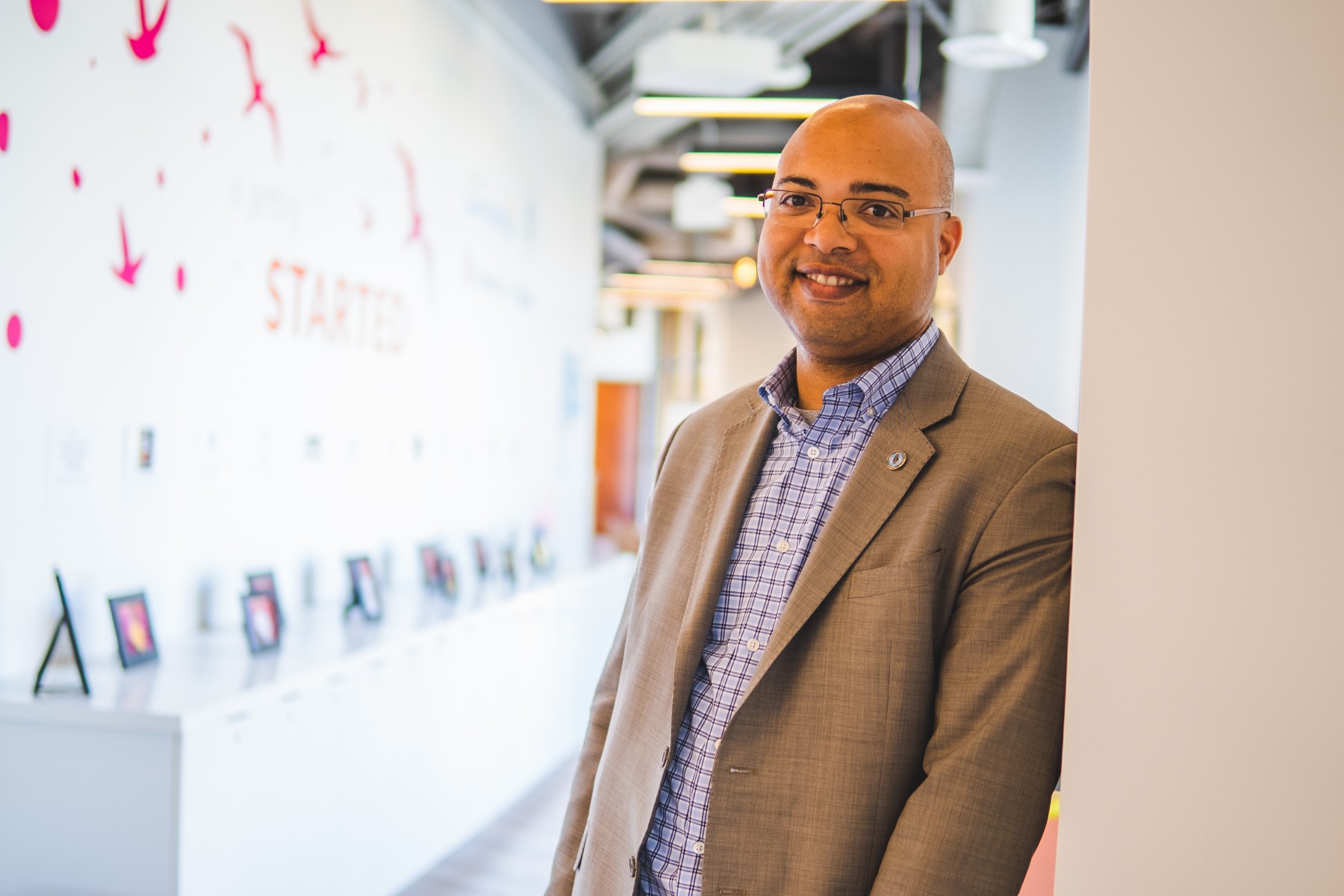 When Erik Caldwell was about 10 years old, his parents purchased the family’s first computer. This was in the late 1980s – before the World Wide Web captured the public imagination – and for a young boy of a certain age, computers were little more than big, clunky video game delivery systems.

Caldwell’s favorite game was “SimCity,” which, as the name suggests, is a simulation in which users can create and manage their own bustling metropolis. In terms of graphics and sheer entertainment value, it was hardly, say, “Super Mario Bros.” But for Caldwell, it was completely engrossing, as befitted the son of two civil servants – his mother a city planner, his father a public housing administrator.

“He would sit there and play that game forever,” said Stella Caldwell, Erik’s mother.

After designing his city, Caldwell would print it out on sheets of paper and staple the pages together to form a giant map. He would ask his mom to critique his creation and she would offer her professional opinion, often adding a gentle admonition to stop wasting so much paper and printer ink.

Thirty years later, Caldwell still counts “SimCity” among his favorite games. The difference now is that while he builds imaginary cities in the virtual world, he also helps build a real one in the actual world.

“Not to denigrate my fellow directors and deputy COOs, but I think it’s the coolest job at the City of San Diego – thinking about what is coming next and planning for that.”

Last year, Caldwell was a featured speaker at the Internet of Things World conference in Santa Clara, where he talked about San Diego’s position on the cutting edge of smart city innovation. Under his leadership, the city developed a smartphone app called Get It Done, which allows residents to report problems like potholes using the phone’s camera and location positioning, and utilize a host of other city services. Coming soon is the functionality to report the misuse of electric scooters, which Caldwell acknowledges that half the population loves and half loathes.

San Diego is working toward the installation of 4,200 Internet of Things (the term refers to the vast number of “things” that are connected to the internet so they can share data with other things) nodes, outfitting streetlights from Rancho Bernardo to the Mexican border with cameras, microphones and other sensors to help the city understand how residents and visitors are moving through its spaces. Caldwell calls it the largest urban deployment of IoT in North America.

And the city is installing devices on its vehicles, including police cars and trash trucks, to collect information related to road conditions or how the vehicles may be operating in an urban environment.

It’s all part of a comprehensive strategy to make the city more immediately aware of and responsive to its residents’ needs – more like Amazon than the outdated model of slow-moving government bureaucracy. 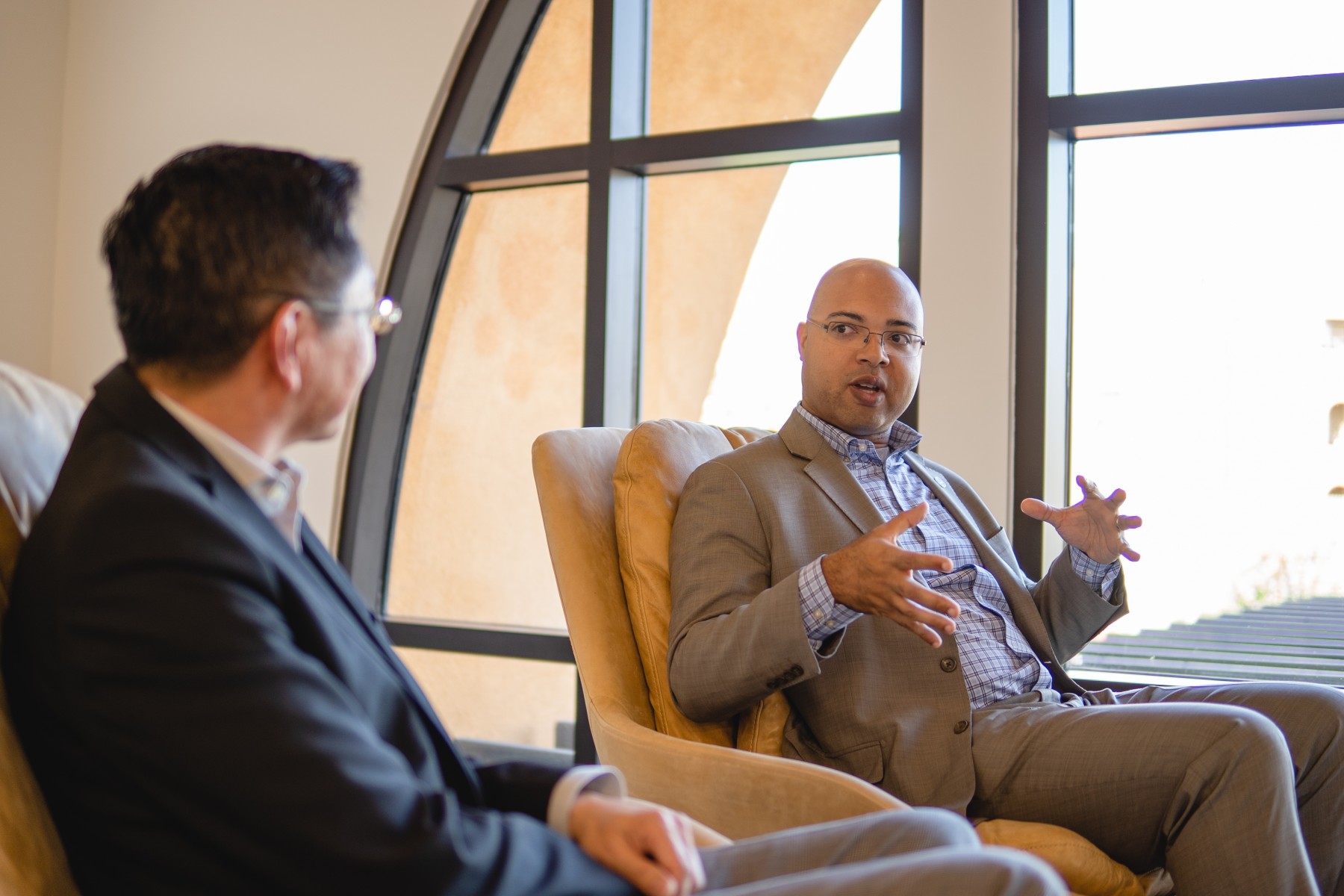 “What excites me about the job is that I think about what the city will look like in the future," Caldwell said. Photo by Alan Brown

“I think cities are embracing the same technology that companies have embraced for a long time,” Caldwell said. “Cities are really behind the curve when it comes to thinking about the Internet of Things. We have infrastructure, whether it’s streetlights or traffic signals or the roads themselves, that is omnipresent in all parts of our community. So how do we deploy sensors that help us better run the business in ways that people expect us to?”

Born in Rockford, Ill., outside of Chicago, Caldwell moved to San Diego at age 16 when his father accepted a job with the San Diego Housing Authority. His mother described him as a deeply curious and inquisitive child, and his parents’ careers rubbed off on him in ways beyond his “SimCity” obsession. While attending Torrey Pines High School, he became fascinated with the inner workings of the federal government and policy-making at the national and international level, to the extent that he would come home from school and watch C-SPAN.

“That should have been nerd alert number one,” he joked.

After flirting with a return to Illinois for college, he chose CSUSM when his dad spotted an advertisement for the nascent university in a local newspaper. He started out as a history major before switching to political science, and history professor Alyssa Sepinwall remembers him as an outstanding student whose classmates once pushed for him to receive a higher grade on a group project about Karl Marx because he had organized them and done most of the work.

During his senior year, he secured an internship – which turned into a full-time position – as a legislative assistant to San Diego County Supervisor Greg Cox. Thus began a series of government jobs, including as a policy aide to former San Diego Mayor Jerry Sanders, that not only reinforced his parents’ influence on him but also reshuffled his professional priorities. Once aspiring to go to law school and run for elected office, he determined along the way that he’s a better fit behind the scenes, on the operational side.

“I think most people run for office because they have a desire to change their community, change the world,” Caldwell said. “What I discovered was that there are opportunities to do that elsewhere in government as well.”

In 2013, Caldwell left government – for good, he thought – to form his own consulting business and pursue an MBA at San Diego State, and he later worked for an early-stage clean technology company. But he was lured back to the civil sector when a former colleague dangled what Caldwell considered a once-in-a-lifetime opportunity to start and build up his own department as San Diego’s first director of economic development.

That colleague, David Graham, has since moved north to become chief innovation officer for the City of Carlsbad – opening a vacancy as deputy COO that Caldwell filled – but he has continued to follow Caldwell’s work with great admiration.

“The future of our cities and the future of our planet is tied into the work that Erik is doing,” said Graham, mentioning not only innovation but also Caldwell’s direction of San Diego’s planning and development and its aggressive climate action plan. “Simply put, Erik is making this planet a better place to live.”

Just as he learned as the mayor of “SimCity.”