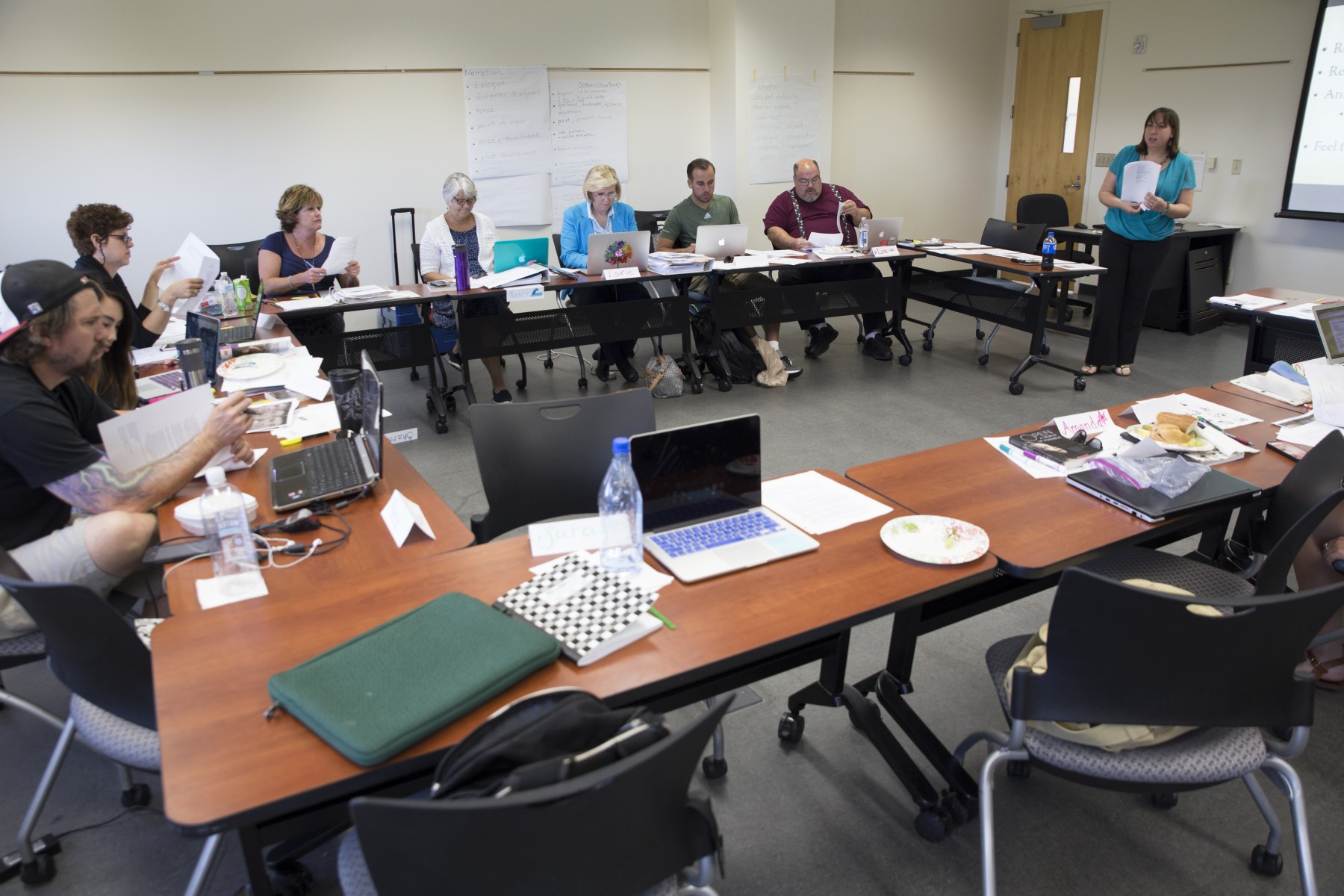 Laurie Stowell wasn’t thinking about becoming the director of the San Marcos Writing Project when she went to an informational meeting more than a decade ago.

But some 15 years later, Stowell remains dedicated to helping K-12 educators throughout the community improve the teaching and learning of writing.

The San Marcos Writing Project is one of about 200 sites of the National Writing Project, a professional development network of teachers aiming to improve student-writing achievement.

Stowell, who recently finished her 24th year as a professor of literacy at Cal State San Marcos, was familiar with the National Writing Project from participating in one when she was a teacher in Ohio.

Eileen Oliver, a former associate dean at CSUSM, had been a writing project director and suggested that they start one at CSUSM.

“I always think of her as the fairy godmother of the project,” Stowell said.

At that first meeting, Stowell jokes that “everybody else sort of stepped back” when it came time to determine a director, leaving her to run the program. And it has been a passion of hers ever since.

“When I became a director they described it to me as a house,” she said. “In the living room is your summer institute, but you keep building out so you have these different rooms doing different things. A lot of people think it’s just the summer institute, but it’s really how you’re developing teacher leadership and serving your area schools.”

The San Marcos Writing Project serves as a resource for K-12 teachers and school districts in the region. There are workshops throughout the year and a variety of Young Writers camps for students during the summer. The centerpiece is the five-week summer institute that uses a “teachers teaching teachers” model to provide professional development opportunities.

“We’re all learning from each other,” Stowell said. “It’s developing teacher leadership. It’s not me offering a class, which is why I love to do it because I get ideas every summer. It’s not just me delivering, it’s the synergy of who shows up that summer.”

Stowell works closely with the North County Professional Development Federation. Each National Writing Project site also has a teacher serve as a co-director, a role Nancy Pace-Skinner has filled here for many years.

“The people who come to the summer institute are very thoughtful, very dedicated, very student-centered,” said Pace-Skinner, who recently retired from the Vista Unified School District. 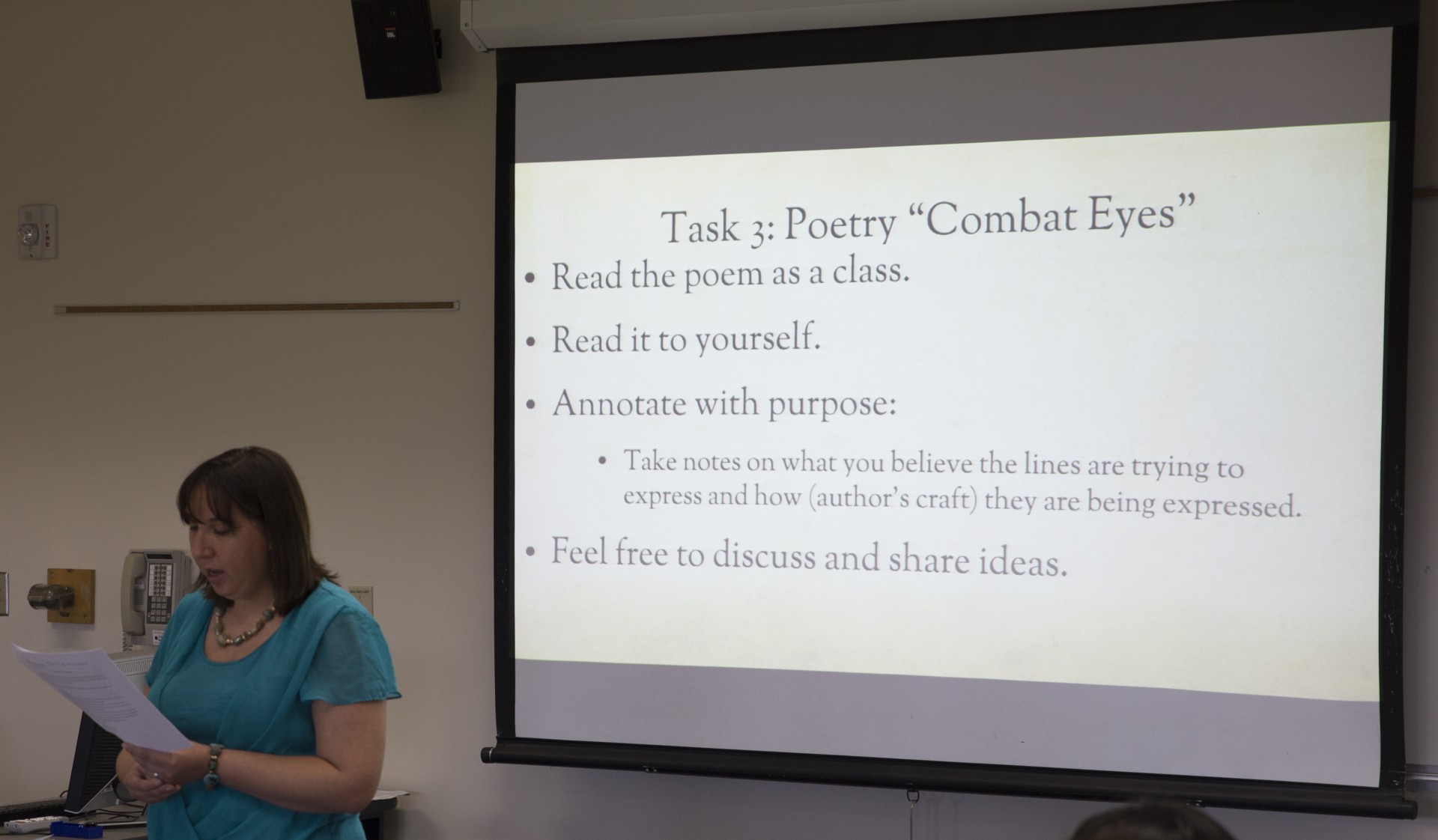 Teachers attend the summer institute from 8:30 a.m. to 4 p.m. Monday through Thursday for five weeks. The mornings include demonstrations, workshops and guest speakers. The afternoons are typically reserved for writing.

Stowell said one of the project’s guiding philosophies is that the best teachers of writing are writers themselves. Participants are able to use their own writing as models and have experiences similar to what they ask of their students.

The teachers meet in peer response groups at the end of the day to share and respond to each other’s writing. They also publish an anthology of their writing from the institute.

“You show up and you write every day,” Stowell said. “That’s what we’re trying to show kids. It’s not that people have been inspired and born gifted writers. You work at it. It’s a hard thing for kids.”

Some educators ask about the challenge of sharing experiences at the summer institute when there might be wide age gaps in the grades they teach, but Stowell said that isn’t a problem.

Stowell said new school writing standards have created a bigger need for writing project workshops as teachers try to become more comfortable teaching students about writing. The hope, Stowell said, is that with these new standards comes a shift away from formulaic writing that may prepare students to write in on-demand situations but not necessarily prepare them to write in college.

“I didn’t realize it was going to be such a hamster wheel of constantly searching for money, but it makes it worthwhile that you can serve the teachers,” Stowell said.

One of the goals of the institute is to help teachers develop leadership skills and workshops and then being able to serve as a model for good writing practices.

“You come here and it’s like the teacher’s staff room from heaven,” Pace-Skinner said. “It’s awesome. Everybody is here because they want to be here. They’re interested and they want to grow and they want to learn. That sustains you. That’s the kind of stuff that just feeds you as a teacher.”