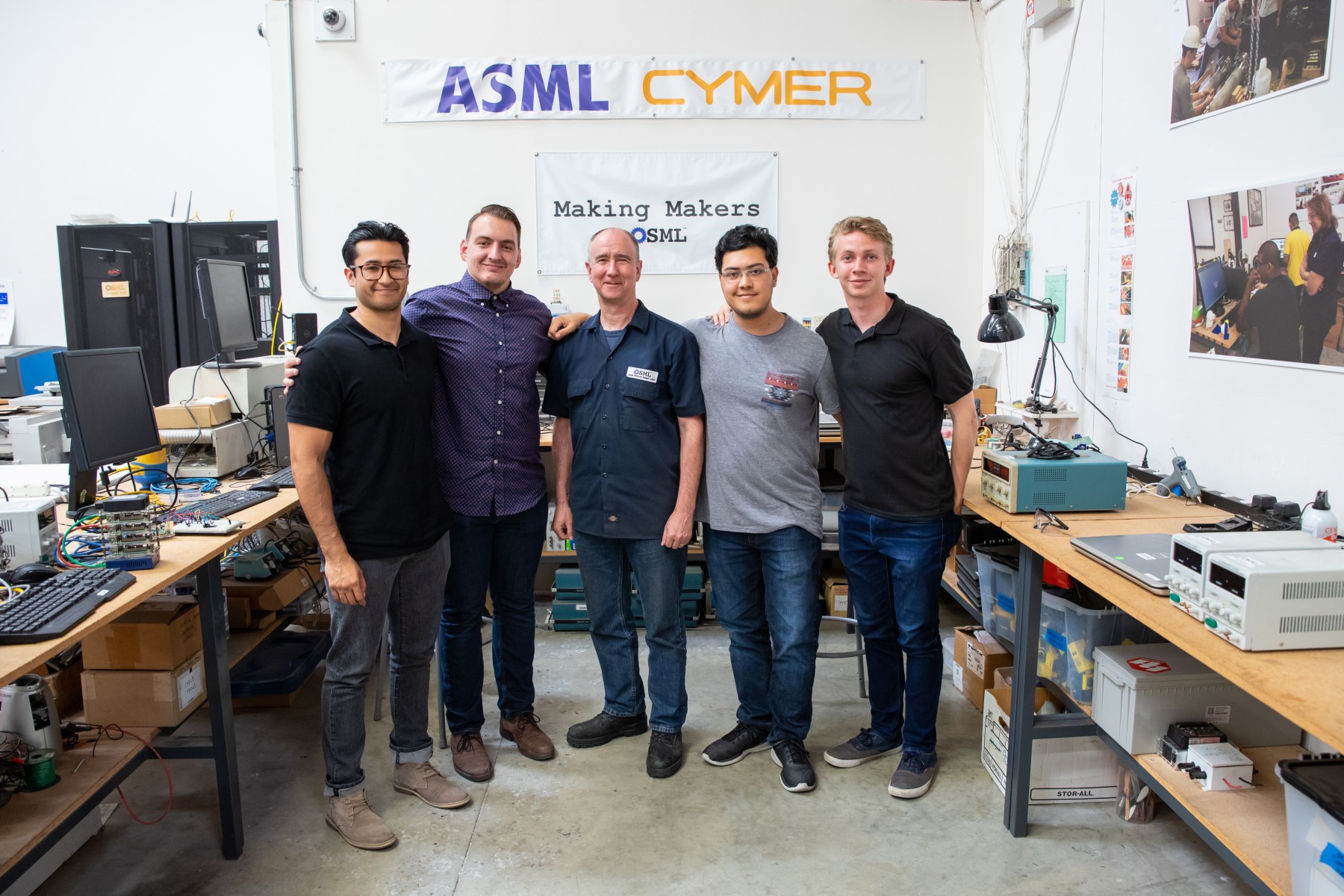 Simpl startup company
Three CSUSM alumni, and one from Palomar College, formed an energy startup business called simpl, with the support of a Vista makerspace founded by Dan Hendricks (center). The CSUSM alumni are Erick Ochoa (left), Dragan Lukic (second from left) and Daniel Sanchez (second from right). At right is Nate Wise, a former Palomar student who's transferring to UCLA in the fall. Photo by Christine Vaughan

Erick Ochoa was one of almost 20 Cal State San Marcos science and math students who accepted a challenge from a Vista-based business incubator in the spring of 2018.

The challenge was this: Come to our laboratory over the summer and try to devise a solution to a problem related to the topic of transactive energy. Ochoa was a physics student who loves to try to decipher complex puzzles, so this invitation was like a siren song to him.

As he embarked on a project that might end up changing his life, he had just one question: What exactly is transactive energy?

It wouldn’t be the first time that Ochoa and the other students essentially were thrown in at the deep end and asked to swim. In the course of the unpaid internship, they were exposed to other relatively foreign concepts like microgrids, blockchains and internet of things.

By the end of the summer, most of the students returned to school, satisfied that they had expanded their knowledge base. But for Ochoa and three others who came to be friends and partners, the experience was merely a jumping-off point.

Almost a year later, Ochoa is the CEO of a startup company called simpl (in the style of modern tech firms, the “S” is lower case and the “E” is omitted intentionally) that builds off work done during the transactive energy project. The 2018 CSUSM graduate founded the business with fellow alumni Dragan Lukic (computer science, 2019) and Daniel Sanchez (physics, 2019) as well as Palomar College product Nate Wise, who will begin studying engineering at UCLA this fall.

“We knew nothing about the topic beforehand,” Ochoa said. “But in eight months, we were able to accumulate a vast amount of knowledge and put something together.”

Transactive energy represents a new approach to dealing with the reality of the old and outdated energy grid in the United States, and the additional strain put on it by the increasing popularity of renewable energy sources like solar and wind power. It’s based on the idea of microgrid technology, which involves breaking up the existing grid that spans large regions into smaller chunks that can be powered by renewables.

“What transactive energy is and what our project focused on is, instead of power being generated miles and miles away and then being transported over these large grid systems, how can we get a system powered by renewable energy – in our case, it was solar – integrated with the grid to be functionable with pre-existing technology and infrastructure?” Wise said.

The quartet of students first experimented with a hardware solution. At Open Source Maker Labs, the Vista makerspace that offered the U.S. Navy-sponsored project, they built and tested a small microgrid using solar panels and batteries.

At the time, they were still just a group of enthusiastic engineers-in-training who were having fun putting their brains together to solve a problem. It was Dan Hendricks, a former Navy captain who established OSML in 2014, who urged the four non-business students to strongly consider forming a business. 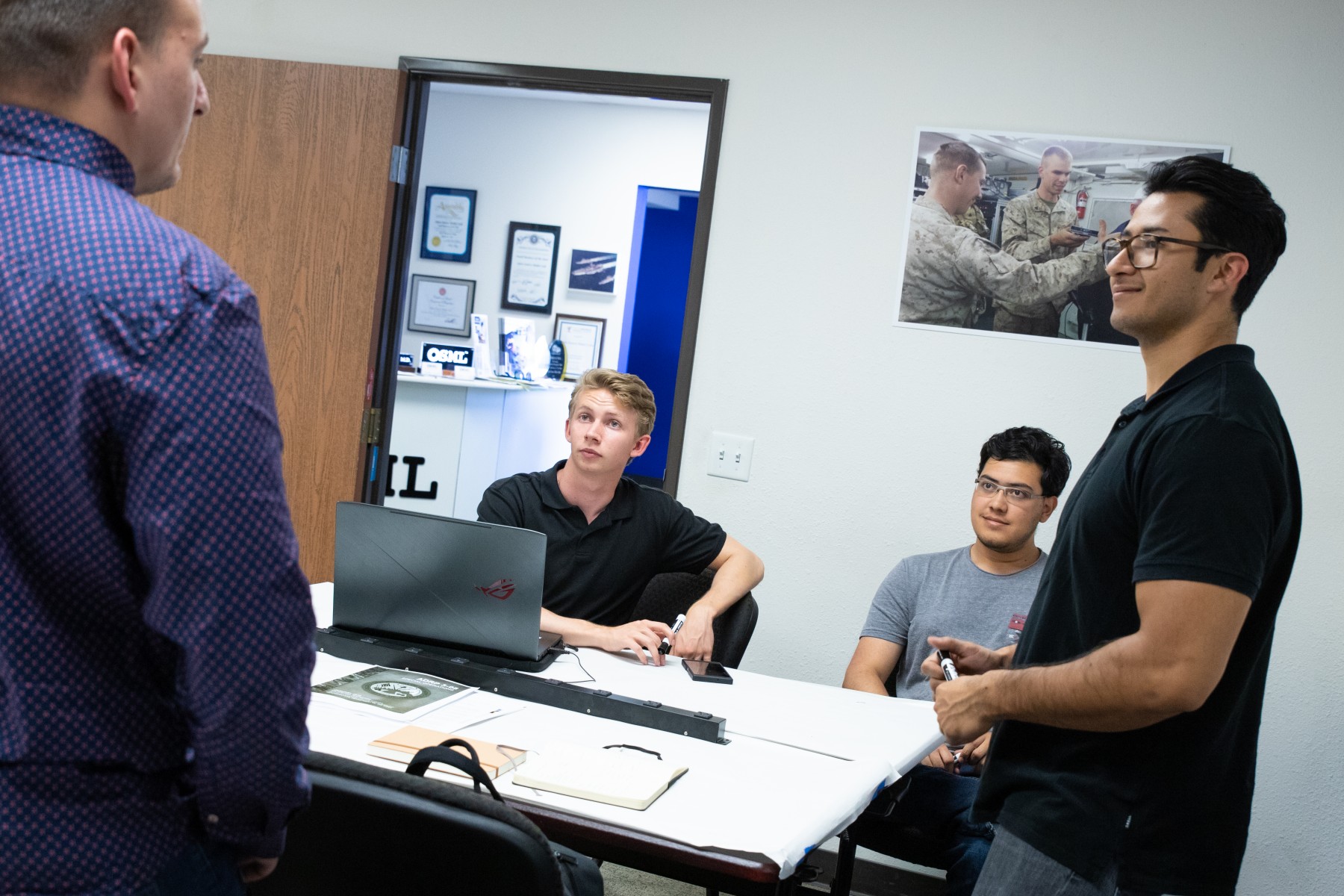 “What triggered me to make the suggestion was not just the technology they were working on, but seeing how they worked together,” Hendricks said. “They didn’t know each other before but very quickly formed a cohesive and focused team. That’s a key ingredient for a startup, so that’s what prompted me to say, ‘Hey, have you ever thought about going into business?’ ”

They hadn’t. But as they began to mull over how they might monetize their initial work, they quickly realized that the cost to produce thousand-dollar microgrids in mass quantities would be prohibitive.

Several iterations of a possible company later, they came up with an idea that they believe lives up to its name. Simpl is a software platform – a website and a mobile app – that facilitates a connection between your thermostat and the droves of solar energy firms that may want you as a customer. The target audience is residential clients and small to medium businesses.

“Right now, it takes a bunch of work to get that information. You have to do months of research, you have to get quote after quote. With simpl, it’s, ‘Here’s your utility bill, here’s the return on investment you could be making,’ and then we pair you with the right company that can address that need.”

Ochoa said he and his partners researched the market and found potential competitors – from solar companies to smart home companies to utilities themselves – that were addressing some of the needs that simpl aims to fulfill, but none that was tackling the issue as a whole. Because the platform has such low overhead, the foursome are funding the venture on their own so far.

They plan to initiate a three-week pilot program of about 30 users on July 13, followed by an alpha program featuring more than 100. If everything progresses smoothly, the business could be launched formally by the end of the year.

Asked what has surprised him most about the process, Lukic said: “That we made it this far. When we first discussed starting this company, I never imagined that we would be so close to doing a pilot program to actually get our product going.”

It seemed fitting that the simpl team was speaking during San Diego Startup Week, May 28 to June 3, and from the OSML offices at the heart of the Highway 78 corridor. OSML is part of Innovate 78, a collaboration of the five cities along the freeway – Carlsbad, Escondido, Oceanside, San Marcos and Vista – to boost economic prosperity in the region.

A few businesses have germinated from OSML already. Team simpl hopes that they are next.

“With so many technological challenges that we’re all facing, how can we get the workforce to accelerate in their learning beyond traditional methods?” Hendricks said. “The current method is you have to stay in school four years before you can be productive. Our hypothesis is, ‘No, people are capable of learning a lot faster than we give them credit for.’ I think these guys proved that in spades.”