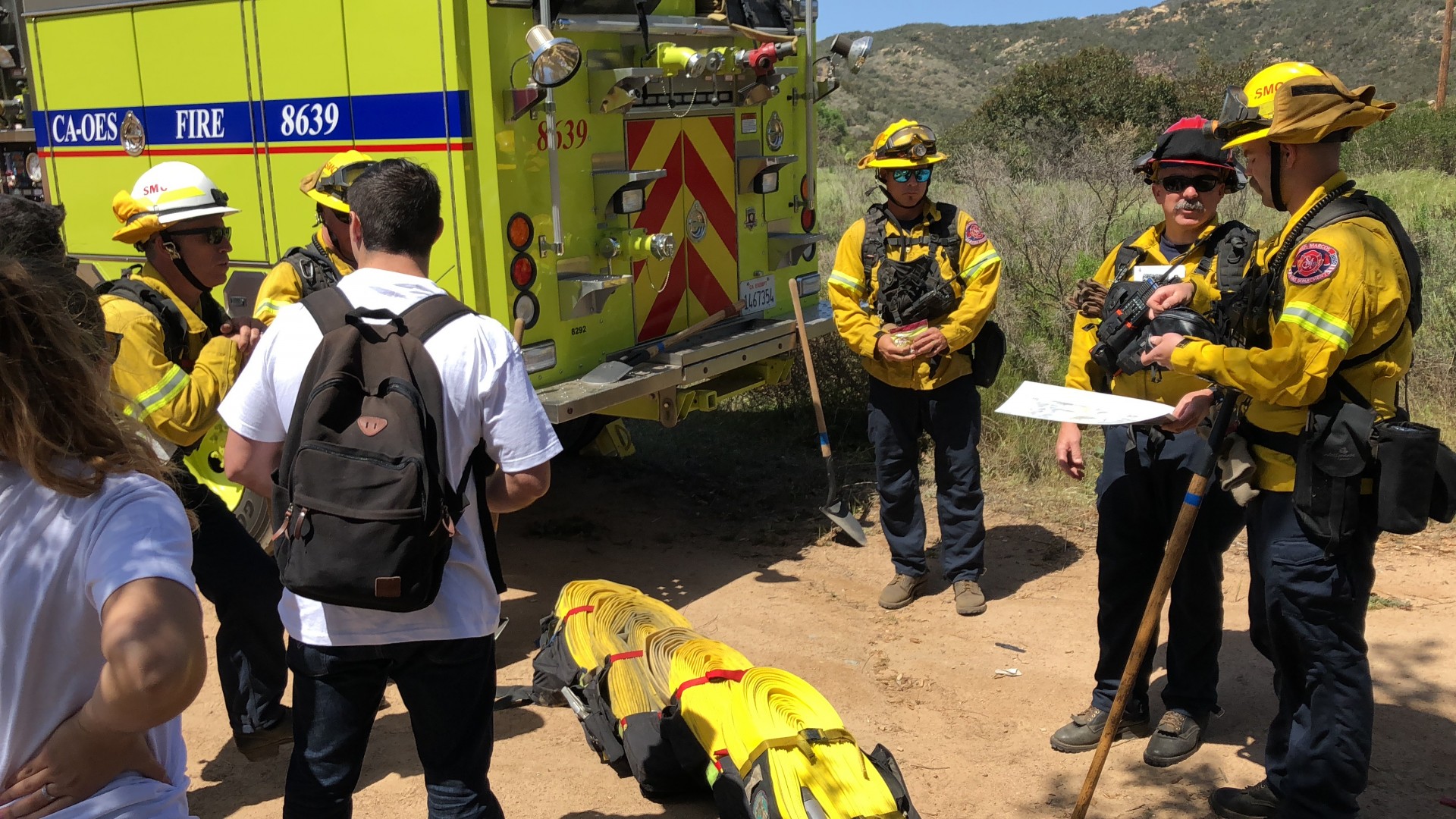 North County firefighters gathered in San Marcos for a wildfire simulation last month, but this wasn’t your typical training.

The City of San Marcos rallied crews from several cities to help Cal State San Marcos students test a drone technology that could improve how wildfires are fought.

“Firefighters spend a lot of time and energy shuttling hoses from the engine to the actual wildfire,” said Nick Blaylock, one of the students involved. “And they’re often doing this up steep slopes and across rough terrain, which is exhausting.”

Drones, however, could possibly help crews conserve some energy by air-dropping those hose packs so firefighters don’t have to haul them. As part of a senior project, Blaylock and four other students spent months exploring that with Skylift Global, a San Marcos-based company that makes drones capable of delivering supplies to first-responders.

Though Sklylift Global has been in business for three years, serving firefighters is new territory it wanted to explore. The company submitted a proposal for the Senior Experience Program, which assigns CSUSM students to real-world projects like these.

The students began by researching what crews face during a wildfire. That led them to San Marcos Fire Battalion Chief James Colston, who oversees the department’s training and safety division.

“We’re fortunate to have Cal State San Marcos right here in our backyard, so we were happy to help,” he said. “We invited them to observe our annual training, which I think opened their eyes.”

It did, in fact, says Blaylock. His team realized that a drone probably couldn’t help much during the early stages of a wildfire because the flames are too unpredictable. But it likely could help during the later stages, when a fire border has been established.

Based on that, the students designed a simulation that included fire hose packs every 100 feet, as if a drone had peppered them out for crews. Now, all they needed were firefighters to run the test.

“Thankfully, Chief Colston got an amazing turnout for us,” Blaylock said. “We were so thankful that so many firefighters were willing to come volunteer their time on a Sunday morning to help us.”

During the May 6 simulation, firefighters from the cities of San Marcos, Carlsbad, Escondido and Rancho Santa Fe — as well as the California Department of Forestry and Fire Protection (CAL FIRE) — participated. Results showed that if crews did not have to manually haul hose packs, they worked about 18 percent faster — and theoretically, would be less fatigued during a real wildfire.

“While time is a good measurement, fatigue is really the key factor,” said Colston, who added that he can see the potential support drones could provide. “If something like this can increase efficiency while reducing the chance of firefighters getting hurt, then I’m all for it.”

That exact sentiment is what inspired Amir Emadi to start Skylift Global. His father was working as a United States cooperative in Iraq when he was killed by Iraqi forces while protecting a city.

“Since then, I’ve spent my life finding a way to introduce technology to the people who dedicate their lives to protect us,” Emadi said. “I formed Skylift to help our first responders save time, money and lives by delivering their critical supplies with our heavy-lift drones​.​​”

As a next step, Emadi will use the research conducted by the CSUSM students to develop a plan to bring the drones to market. There are still hurdles to navigate, as drones are legally not allowed to be in the air during a wildfire, but Emadi is optimistic he can keep the momentum going.

“It was refreshing to work with such a driven, intelligent and responsible team,” he said, adding that although the CSUSM students have now graduated, some have remained interns and he hopes to hire them. “I am so thankful that San Marcos is home to such bright young talent like this, as well as city leaders who value innovation and are open to collaboration.”

The upcoming Winter Intersession at Cal State San Marcos offers a wide range of online and hybrid courses with a compressed timeline to the community. These courses enable individuals to accelerate their progress toward a degree by earning as many …
Read more

Cal State San Marcos is doing its part to help bridge the digital divide that has been exacerbated by the coronavirus pandemic.  CSUSM is one of eight campuses participating in a California State University initiative called CSUCCESS (California …
Read more

The upcoming summer session at California State University San Marcos offers more than 180 online courses to CSUSM students as well as students from other universities and individuals in the community. In addition, a popular summer payment plan is …
Read more
NewsCenter