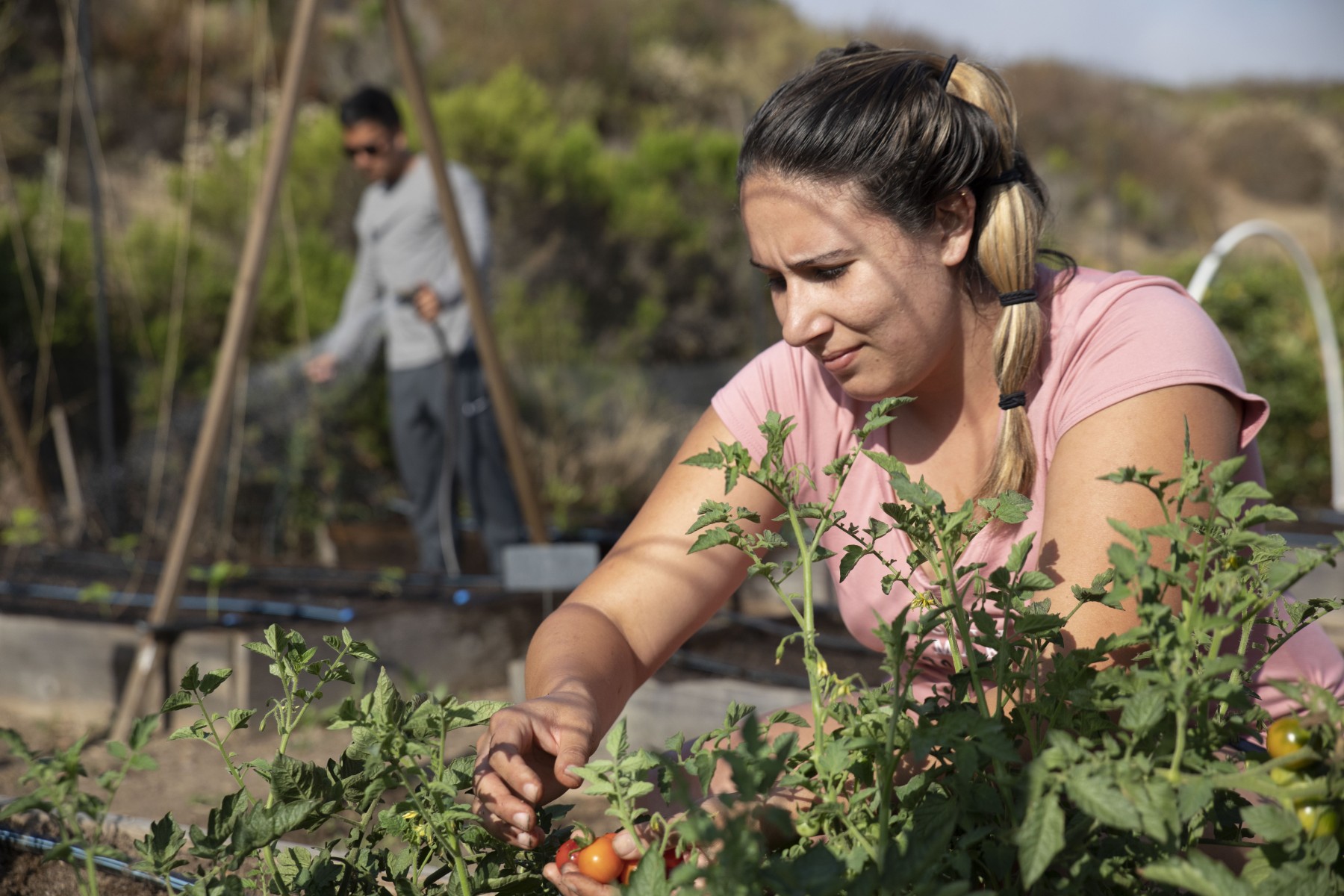 Greig Guthey still remembers the first environmental studies classes he taught at Cal State San Marcos. Students gathered on the third floor of Academic Hall in a room that had one small window that didn’t open.

“You’re teaching about the food system and talking about food, but you’re in this room with no connection to the outside,” said Guthey, the coordinator for CSUSM’s environmental studies program.

Knowing the importance of being outdoors to develop connections with the ecology, Guthey worked with his students to establish a sustainable food project garden. What began as a small pilot project in 2012 has grown to serve more than 100 students who take classes taught by Guthey and fellow environmental studies professor Gabriel Valle in the garden each year.

Guthey and Valle are collaborating with sustainability manager Juliana Goodlaw-Morris in an effort to expand the garden and provide fresh produce for all CSUSM students through the Cougar Pantry, an Associated Students Inc. initiative to decrease food insecurity among students.

CSUSM was among 14 California State University campuses that received grants from the Chancellor’s Office last spring in support of basic needs and student well-being. Valle received a $15,000 grant focused on producing food for the Cougar Pantry and doing so consistently throughout the year. As part of the grant, he and Guthey will be examining whether growing and distributing food helps students become leaders in addressing basic needs.

Goodlaw-Morris also received a $3,000 stipend that is being used to help fund improvements to the garden.

“The garden is a great academic space,” Goodlaw-Morris said. “It’s a place where students can put into practice what they’re learning in the classroom and have hands-on learning opportunities.”

Students use the garden as an outdoor classroom as part of Guthey’s fall course on food systems and emerging markets and Valle’s spring course on food justice. Valle also recently taught the first summer course in which the garden was used extensively, a class focused on diet and the planet.

“We have a lot of fun,” Guthey said. “It’s a different environment for students, and that really helps. It gets them outside of their regular pattern. It helps open up their minds and interact with people in different ways.”

In the past, the garden was largely unattended during the summer recess, and Guthey’s classes had to spend the first few weeks of the fall semester restoring it for planting. By adding a summer course, they’ve cut down the unattended times significantly, an important step in preparing to produce food for the Cougar Pantry throughout the year. They have also added a student assistant, Jameson Meyst, who has brought expertise from growing food on his family’s property in Valley Center. As part of the improvements being made, Jameson helped Valle’s summer students build a hoop house, which can extend growing seasons and provides warmth from the sun and cool air from the winds.

Students spend some time in a traditional classroom, but they are largely in the garden, learning about everything from the importance of soil composition to proper watering techniques.

The garden is tucked away on the east side of campus behind the Center for Children and Families. Students grow a wide variety of fruits and vegetables, including corn, cucumbers, kale, tomatoes and zucchini. There is even a macadamia nut tree.

One of the ongoing challenges for Guthey and Valle is making sure people know about the garden and that it’s open to anyone.

To relax, Sammie Deane Phinney, an environmental studies student who also took Valle’s summer course, said she frequently walked over from her nearby Block C apartment even when she wasn’t in class.

With her first child due in January, Sammie said working in the garden has inspired her to grow produce at home so she can make baby food.

“I’m super excited that I have this knowledge because I want to bring it into my child’s life,” Sammie said. “It’s really enlightened me on what’s best for me and my child.”

The garden has already undergone some of the planned improvements. One of the biggest was gaining control over new water stations. In the past, the garden was part of the larger university watering cycle, which often meant plants getting too much or too little water. Now, with support from Facility Services, they are able to better monitor the plants and adjust the amount or pressure of water accordingly. New fencing is being installed, which will help protect the garden from rabbits and gophers, and Guthey and Valle are awaiting final approval from the Office of Planning, Design and Construction to expand the garden, pushing its eastern boundary out an additional 50-60 feet.

While many of the students who take the courses are environmental studies majors, Guthey and Valle stress that their classes are open to all students.

“We encourage any student who is interested in where their food comes from – whether it’s the nutritional side, the access side or the food system science – to take classes and to see what it’s like to grow food,” Valle said. “This is a learning garden. Part of the reason it doesn’t look like a perfect farm is because students are learning how to do all of this.

“We’re trying to do what we can to let more people know about the garden and the classes down here, and let them know that it’s fun, rewarding and enjoyable.”