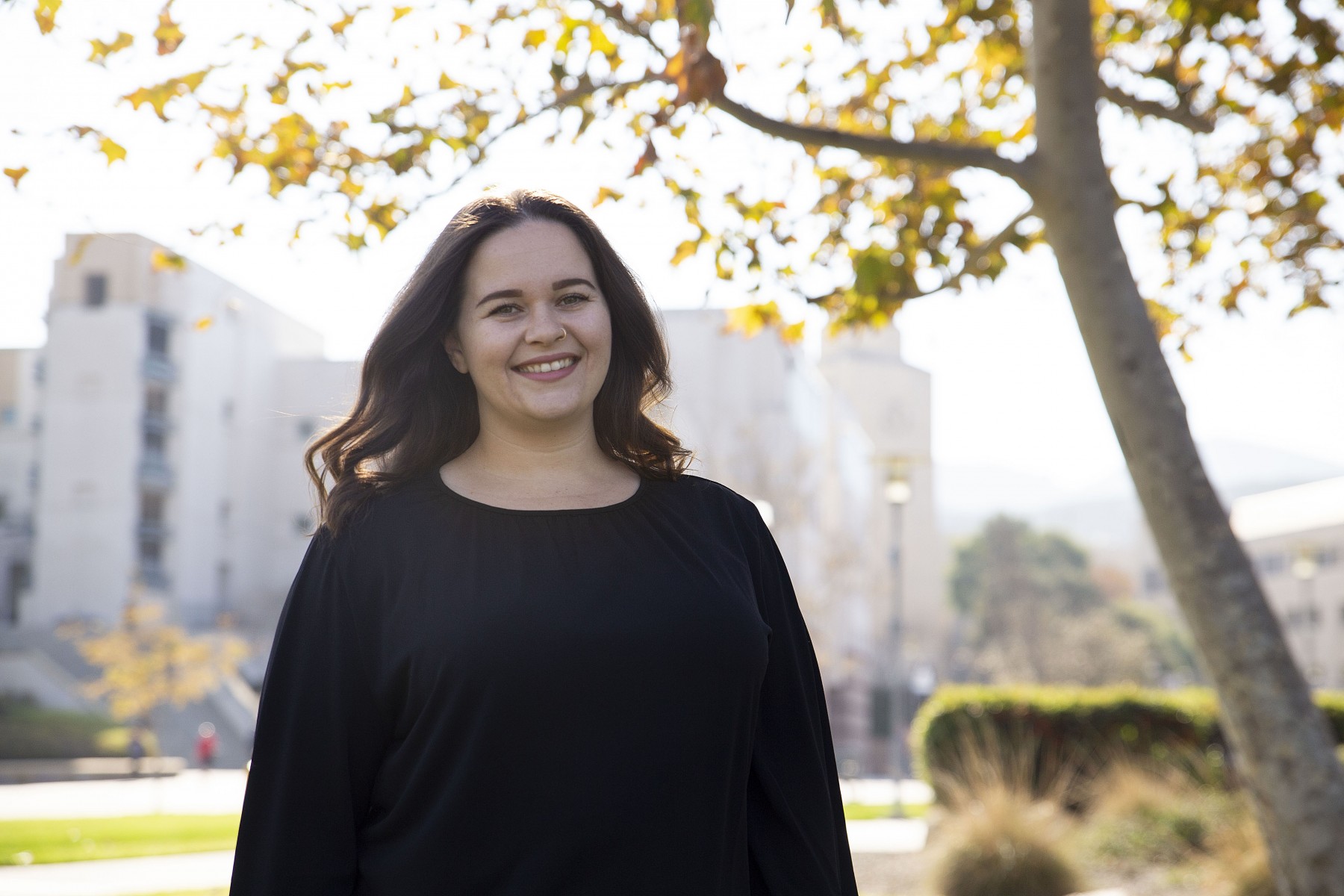 Tiffany Teusch
After graduating from Cal State San Marcos at the end of the fall semester with a degree in sociology, Tiffany Teusch has already started work toward her Master of Social Work through Arizona State’s online program. Photo by Andrew Reed

Tiffany Teusch didn’t give much thought to college as a teenager.

Teusch failed most of her high school classes as a freshman and sophomore. She spent her final two years of high school transitioning to a new school, a new living situation and trying to complete her normal coursework while simultaneously making up for the classes she flunked.

“I wasn’t one of those students who was saying, ‘Let’s do college applications,’ ” Teusch said.

But nearly 10 years later, Teusch has her bachelor’s. She graduated from Cal State San Marcos at the end of the fall semester with a degree in sociology and has already started work toward her Master of Social Work through Arizona State’s online program.

Teusch is grateful for many things on the path to her degree. For the support of ACE Scholars Services. For extra financial assistance through a Pardee Foundation Scholarship. And certainly for her son, Javius, who inspired her pursuit of a bachelor’s and master’s.

“Tiffany is one of the most dedicated and hard-working individuals I have had the opportunity to work with,” said Leigh Quijada, coordinator/counselor for ACE Scholars Services, which supports former foster youth at CSUSM.

“She excelled in her academics at CSUSM all while raising her young son and growing both personally and professionally. She has overcome challenges with such positivity and resourcefulness.”

Teusch grew up in Julian, a town of about 1,500 an hour east of CSUSM. Her parents both struggled with drugs, and her mother left when Teusch was still a toddler. By the time she started high school, she was mostly taking care of herself. School wasn’t a priority, and her grades suffered as she attended sporadically.

“I was kind of on my own,” Teusch said. “I was responsible and I was working, but I was also partying a lot. It’s a very small town, so there’s really nothing else to do. I was just partying a lot and drinking a lot and smoking a lot, which I didn’t even really like. I don’t like being high, so I don’t know why I was doing that. I think it was just an escape or something to do.”

Teusch stopped drinking and smoking before the end of her sophomore year. She stopped showing up at parties. She focused on doing better. But as summer vacation was about to begin, life took a dramatic turn for Teusch and her younger brother.

Someone at her school called Child Protective Services.

“They said, ‘They’re not going to survive summer at home when they’re not coming to school,’ ” Teusch said.

Teusch spent a few months in a foster home before being placed in San Pasqual Academy, a residential education campus in Escondido for foster teens. Teusch spent her days in school, her afternoons working and her nights at an adult school to make up the classes she had failed. 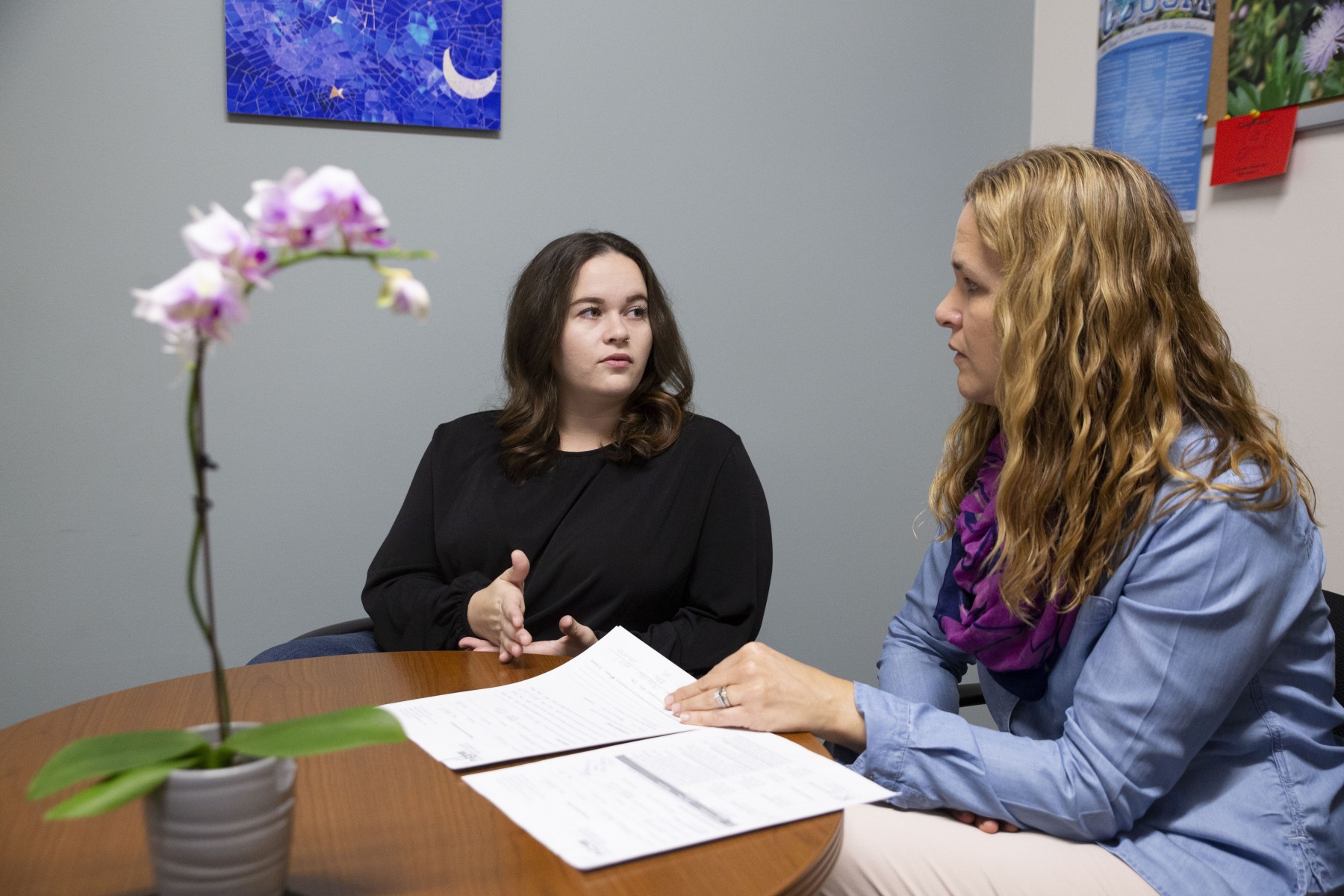 Tiffany Teusch
“Tiffany is one of the most dedicated and hard-working individuals I have had the opportunity to work with,” says Leigh Quijada (right), coordinator/counselor for ACE Scholars Services, which supports former foster youth at CSUSM. Photo by Andrew Reed

During her post-high school transition to a housing program, she learned about financial aid for college and decided to take a few classes at Palomar College. Teusch took a break from Palomar to obtain a certificate in medical billing and insurance coding from UEI College, which offers vocational and trade school programs, so she could better support herself. At 23, she learned she was pregnant. Looming parenthood fueled her desire to finish her associate degree and transfer to CSUSM to complete her bachelor’s.

Juggling motherhood, school and work was challenging. But ACE provided a strong support system, and the Pardee Foundation Scholarship, awarded to students with a financial need who have at least a 3.25 grade-point average, alleviated some of the financial stress.

“The scholarship was very helpful since I couldn’t work as much,” Teusch said. “It really helped cover the gap between what I made at work and financial aid.”

But Teusch faced another unexpected challenge. For the first time, she was starting to understand how the difficulties she faced as a child were impacting her as an adult.

“I don’t think that I really felt my struggle until I was an adult,” she said. “I didn’t feel all the internal stuff, the depression and anxiety. I didn’t have a name to put to it. I just kind of lived through it. I think when I had my son is when I realized, ‘OK, there’s some stuff going on here.’ ”

Teusch credits CSUSM’s Student Health and Counseling Services for helping her work through those issues. Her goal is to pursue a career in clinical therapy after receiving her Master of Social Work.

She has already been working to help others, including students at a familiar place. Almost a decade after graduating from San Pasqual Academy, Teusch returned last fall to work as a peer mentor.

“One of their favorite things to throw out is, ‘You don’t know what I’m going through.’ And I say, ‘Actually, I do,’ ” Teusch said. “They can’t use that with me. They realize, ‘Here’s someone who left and has come back, and so they are here for me.’ I think it’s a big deal for them.

“I know when I was there, a lot of people who came back were just looking for services, looking for housing, looking for help. They were kind of struggling. I’ve had my own struggles, too, but I think that being able to come back and show them that you can succeed is a big deal.”