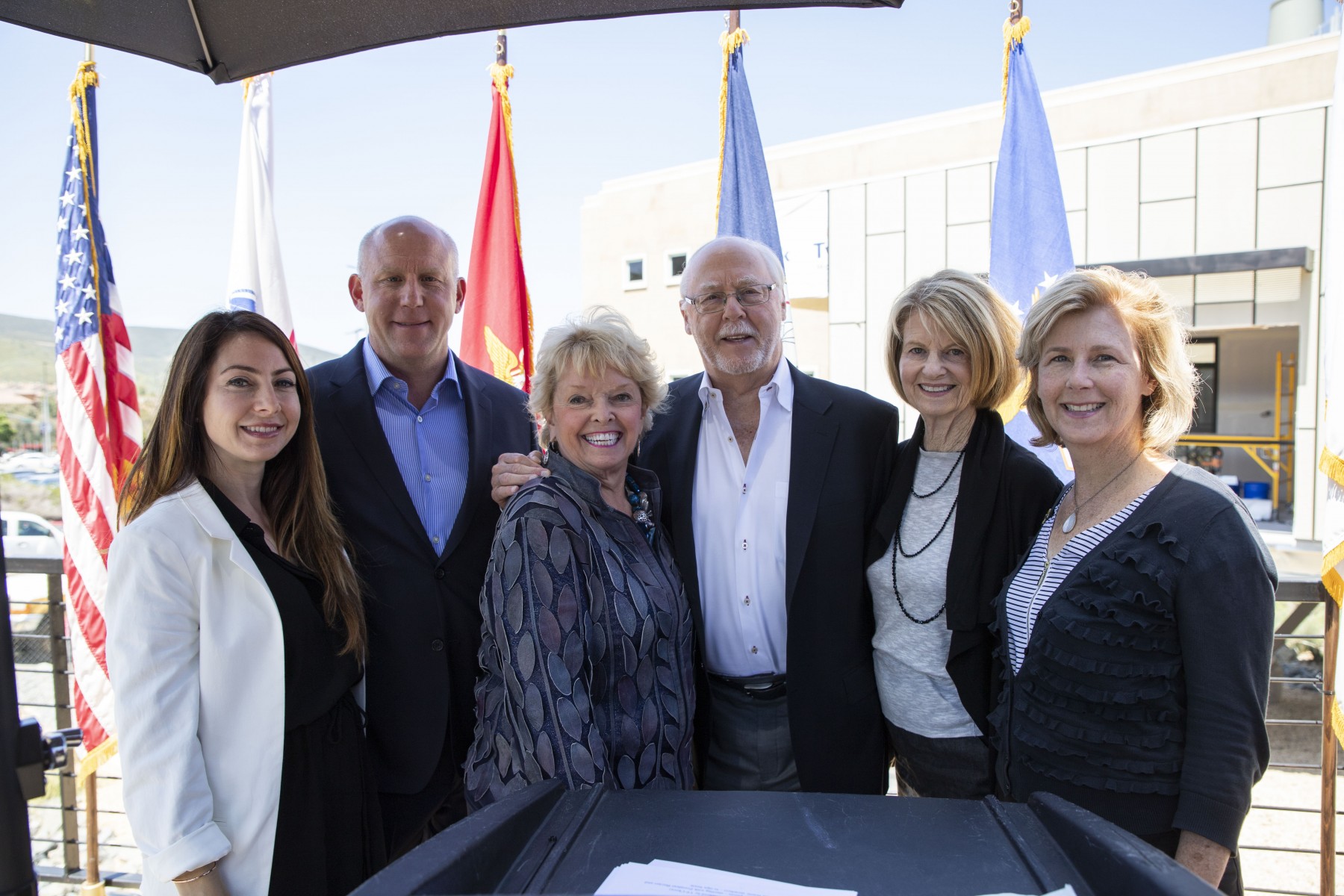 Epstein Family Veterans Center
The expansion of the Veterans Center was made possible by the generosity and support of the Epstein family. Photo by Andrew Reed

The wait is nearly over for Cal State San Marcos’ military-affiliated students.

The much-anticipated expansion of CSUSM’s Veterans Center is nearing completion, and many of the entities involved in making it a reality gathered to celebrate a milestone on Friday, May 24.

About 40 people attended a private “topping off” ceremony on the deck of the original Veterans Center. As President Karen Haynes spoke, attendees had a clear view of the ongoing expansion and they received a tour of the fledgling facility following the formal program.

“Today’s milestone is another sign of our university’s growth and commitment to our student veterans and their families,” Haynes said. “We take great pride in supporting those who have served our country, and the Epstein Family Veterans Center stands as an important home for the student veterans who have proudly served our country and sacrificed for the common good.”

The Epsteins’ gift provided funds for the physical expansion of the existing Veterans Center while also providing an endowment to fund critical programs to support veterans and their families.

The expanded building was constructed off site in Riverside County and delivered to campus earlier this month, with the renovations expected to be completed later this summer.

The expansion is creating a larger lounge for students, a computer lab and reception areas, and four additional offices, ensuring that the Veterans Center will be a one-stop shop for student veteran services.

“I am grateful for the Epsteins’ continued support of our university and commitment to our student veterans and their families,” Haynes said. “Their gifts are truly the difference between accomplishing dreams and merely imagining them. Their philanthropy is helping to move our university and our region forward.”

Haynes also thanked CSUSM’s Office of Planning, Design and Construction, which designed the expansion and has overseen the project; Silver Creek Industries, which customized the building to ensure that it best serves the needs of student veterans; DMI, which has spent countless hours on the foundational work; and the Veteran Services team.

Glen Bullock, president and owner of San Marcos-based DMI, noted CSUSM’s long history of working with veteran-based businesses as an appealing part of the project.

“We’ve been around the university now about 11 years and feel very fortunate to have the opportunity,” said Bullock, who served 10 years in the Marines. “The team out here at Cal State San Marcos is a pleasure to work with. It’s a family-oriented feeling, and you’re with people who really care. It’s a pleasure and an honor to be part of it.”

CSUSM has the highest per-capita number of military-affiliated students among all California State University campuses and is consistently ranked among the top schools in the annual “Best for Vets” college rankings.

“Our dedication to our nation’s military is an integral part of our university’s mission to serve the diverse population of our region,” Haynes said. “We take great pride in supporting those who have served and their dependents; in aiding their transition from a tight-knit community in the military to a tight-knit community here at CSUSM; and in focusing on each individual and positioning them for success now and beyond graduation.”

M.J. Lee already was struggling acutely with the effects of the coronavirus pandemic as the fall semester at Cal State San Marcos drew to a close.It was hard enough for Lee to juggle a …
Read more

Financial hardship is overwhelmingly one of the most common reasons a college student places their education on hold. But thanks to the generosity of Cal State San Marcos employees who called “dibs,” …
Read more

Bob Mangrum often told stories about the impact teachers had on his life. Mangrum’s mother died when he was young, and he had a challenging upbringing in Oklahoma. He shared with his children, …
Read more
NewsCenter