What a Difference a Decade Makes: President Haynes Reflects on 10 Years of Success in Annual Report to the Community, Feb. 6 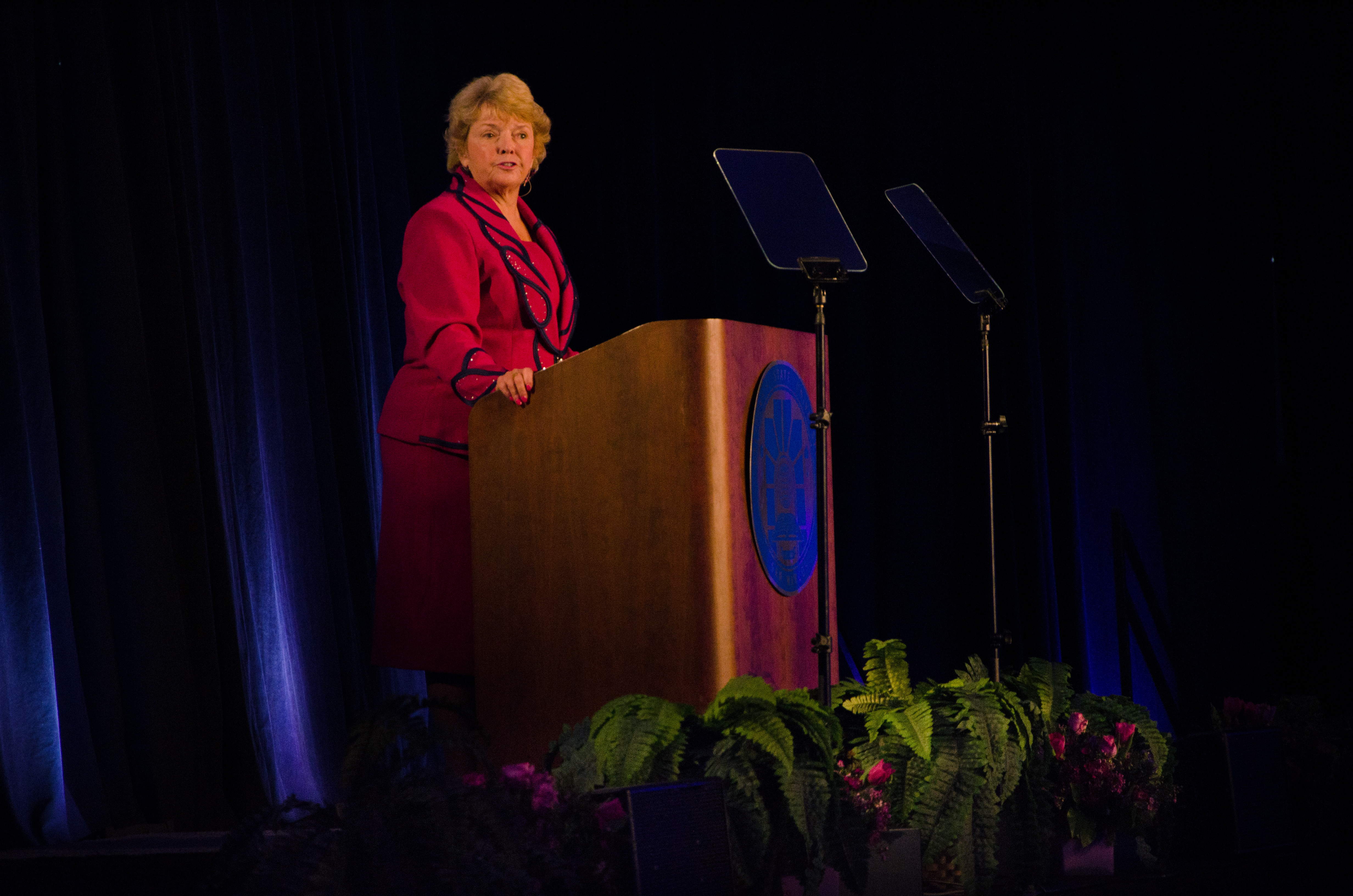 In her 10th annual Report to the Community on February 6, President Karen Haynes reflected on her journey from being the lone female presidential finalist to becoming the University’s third and now longest-standing president in campus history.

“Our shared journey, our shared commitment and work, has created a university with expanded access and broader reach, a university that is both the anchor of this region and a model in the nation,” said Haynes, in front of nearly 600 regional business and community leaders who gathered into the event pavilion to hear her speech.

In the midst of a six-year recession that brought a dramatic reduction in state funding, CSUSM was quick to adapt to a new framework based on community and civic partnerships in order to meet its mission and priorities. Haynes said this nimbleness was essential in the face of reports that indicated that Riverside and San Diego counties were experiencing moderate to robust growth in the number of high school graduates – many of whom are not expected to continue their education past the 12th grade. Statistics also signaled that California would be short one million college educated workers by 2025.

The 2007 opening of CSUSM’s off-campus center in Temecula is a robust example of how University leaders worked with regional and civic entities to leverage resources and provide increased access to higher education during a time when most institutions of public higher learning were contracting programs and restricting admission.

“We’ve already graduated more than 300 nurses from CSUSM at Temecula, right in time for the opening of the new Temecula Valley Hospital,” Haynes said. “And we currently have nearly 300 students enrolled in nursing, kinesiology and business administration – so many that we need additional space.”

CSUSM’s guaranteed admission programs with regional school districts and K-12 educational partners were also touted as another example of CSUSM’s commitment to educating the region. Students who come to CSUSM through these partnerships have higher GPAs and higher retention rates.

“We created the guaranteed admissions program to help at-risk students get into and through college and prove the statistics wrong,” explained Haynes. “We started with one program and have expanded now to agreements with eight public school districts.”

A Commitment to Educating Underserved and At-Risk Populations

In her remarks, Haynes highlighted the University’s emphasis on providing support to students from underserved and at-risk backgrounds. The ACE Scholars Servicesprogram, founded in 2007, offers scholarships, on-campus work opportunities, internships, counseling and other support to former foster youth. Thanks to the success of ACE, Cal State San Marcos educates more students from the foster care system than any other institution in the United States.Like former foster youth, American Indian students also have historically been overlooked. Through college fairs specific to tribal communities, communications in Native languages and efforts of CSUSM’s tribal liaison, more American Indian students are enrolling and succeeding at CSUSM.

“We are doing the work that our regional sister institutions are not,” said Haynes. “Yes, the other institutions are filling a need and doing excellent work. They are increasingly meeting national and international needs and taking high caliber students…But these are not the educationally at risk students, the veterans, the former foster youth, the American Indians, the ones the statistics said wouldn’t go to college.”

No Longer the Best Kept Secret in North County

The reputation of Cal State San Marcos has expanded beyond the boundaries of North San Diego County, putting the University in the national and international spotlight.

Haynes emphasized the faculty’s commitment to engaging in groundbreaking research, including one professor who led an international team of 75 scientists inthe first-ever documentation of a pan genome shared by different algal varieties.The findings are opening new avenues for studying climate change and carbon cycling.

“It’s all work that may change the world, that will shape the future and that is transforming our region into a global knowledge center,” explained Haynes. “It’s work that is making us nationally known.”CSUSM’s national reputation as a veteran-friendly campus also led the Stevens Institute of Technology in New Jersey to donate a sustainable building for use as a new stand-alone veterans center. And it was CSUSM’s forward focus and innovative spirit that led a CSU trustee to select San Marcos as the ideal place to create and launch the CSU Institute for Palliative Care last year.

“The Institute will address an important part of the national public health agenda that was being ignored, and the impact of our programs will be profound,” said Haynes. “We will change the face of healthcare delivery.”

A Great Future for a Great University

As she concluded her speech, Haynes proudly pointed to examples of the growing momentum at CSUSM.

“Together we have continued to blur the lines between our University and our region,” she said. “Together we have formed partnerships that leverage the strengths of those at the table and that provide mutual benefit to our partner and our University. We have engaged together in issues important to the region’s future. We have identified and leveraged new technologies, solved critical issues through research and service, and developed our workforce.”

Moving forward, Haynes promised that Cal State San Marcos would remain focused on educating students through theoretical and experiential learning; investing in and supporting sophisticated, life-changing research; and working hand-in-hand with its community to enable positive change, to solve substantive issues and to partner for the common good.

“In 10 years together, we have transformed lives, rebuilt communities and reinvigorated our economy. We have built a university geared toward educating the 21st century student,” concluded Haynes. “I am so proud of the work we have done together.”

Seeking Participants for Research Study on Below-the-Knee Amputees
Attend an Open Forum for the Director of Veterans Services Search
Another Record-Breaking Giving Day
Psychology Professor Mentors Students in Cause of Fighting Effects of Smoking
Holiday Traditions Around the World on Dec. 2
Advocate Leaves Lasting Impact on Students

What a Difference a Decade Makes: President Haynes Reflects on 10 Years of Success in Annual Report to the Community, Feb. 6