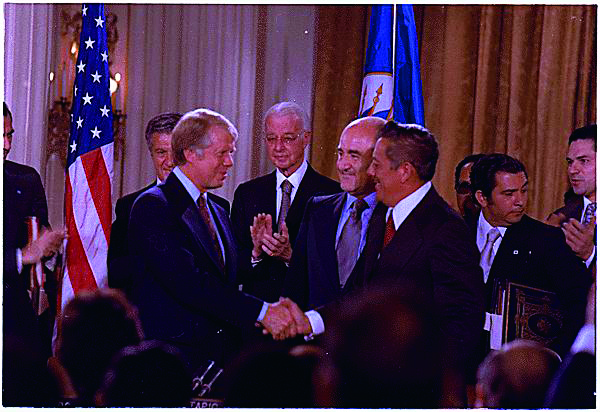 Ambassador Alejandro Orfila, former secretary general to the Organization of American States and Argentine ambassador to the United States, Japan and the Soviet Union

Other guests include regional civic leaders, members of the University’s Advisory Council and Foundation Board, and CSUSM faculty and staff.

WHY: Alejandro Orfila is an esteemed member of the international and local community, as well as a humanitarian and educator who has impacted the lives of thousands on a global scale. He is an inspiration, an example of the promise of a California State University education fulfilled.

Ambassador Orfila has worked closely with U.S. Presidents from Dwight Eisenhower to George H.W. Bush and served as Argentine ambassador to the United States, Japan and the Soviet Union. One notable contribution to foreign policy and diplomacy came as Secretary General of the Organization of American States, when he negotiated the Panama Canal Treaty of 1977.

After retiring to San Diego in the late 1980’s, he founded what has become one of the most influential wineries in the region, Orfila Vineyards. As a member of the first President’s University Council at CSUSM, he assisted with the creation of the University in 1989. He has provided advice, counsel, and support to every Cal State San Marcos president in the University’s nearly twenty-five year history. In 2013 he agreed to serve as the Department of History’s first Distinguished History Maker, connecting with students and faculty to support the educational mission of CSUSM and enrich students’ learning experiences and career aspirations.