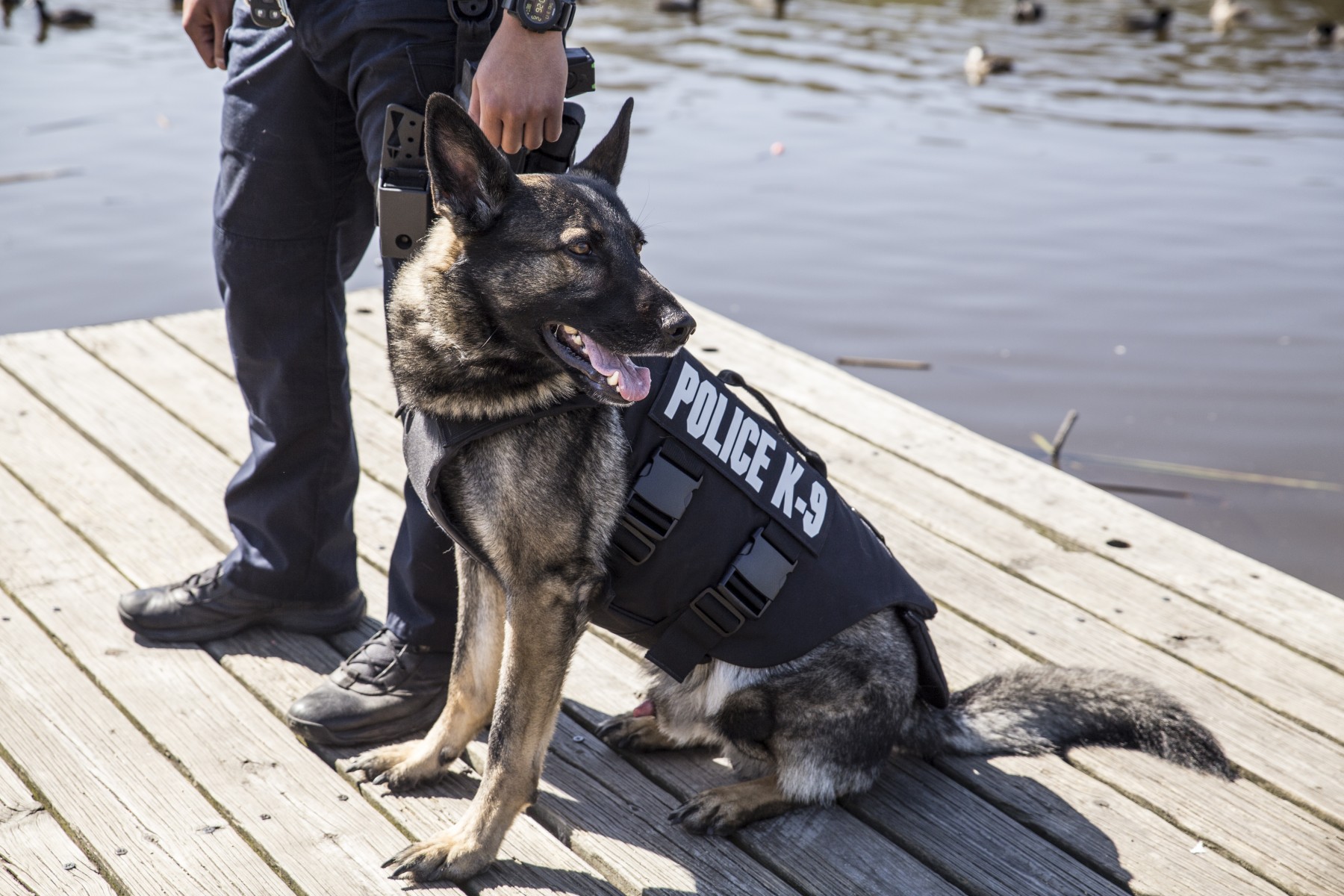 The nonprofit based in Massachusetts is dedicated to saving the lives of canine law enforcement counterparts across the country through the donations of bullet- and stab- proof protective vests.

Armor, a 4-year old German Shepard, arrived in the U.S. for training just over a year ago. CSUSM Police Officer David Angulo and his trustworthy, K-9 crime fighter spent countless hours at the Inglis Police Dog Academy in Santa Paula, California before working their first assignment together at the University’s commencement ceremonies last May.

“Armor's vulnerability is my biggest concern during critical incidents such as an active shooter and/or during explosive detection sweeps,” said Angulo. “Although Armor's vest won't prevent those incidents from occurring, it definitely gives me a peace of mind knowing he has some preventative measures that will give him a fighting chance in the unlikely event that we are exposed to an attack.”

Armor is one of three explosives detection canines in the California State University system and the only one in North San Diego County. He is proficient in detecting 20 odors, more than the federal requirement for a certified K-9.

The duo has a very important role on campus—to search buildings, structures, open areas and vehicles, as well as articles, where a suspected explosive device has been reported or located—but their duties extend beyond CSUSM. They are frequently on call for external requests from the City of San Marcos and other surrounding communities that may need their support.

Armor has also assisted with dignitary protection details, including VIP visits and the Special Olympics. In September he was assigned to a small detail team that provided support for the CNN Republican candidate debate at the Ronald Ragan Presidential Library.

Unfortunately it is not uncommon for a K-9 like Armor to be fatally injured while in the line of duty. More often than not, K-9s are sent into serious situations first, putting their lives on the line for their partners.

“I have no doubt Armor would risk and give his life to protect me,” said Armor. “With that said, I want to do everything I can to help keep him safe. I wouldn't expect my human partner to go on duty without this protective gear, nor my K-9 partner.”

The majority of these vests are donated to narcotic detection canines and has a value of about $1700, but because the use of Armor throughout North County and neighboring communities is so extensive VIKs recognized his need for protective gear that matched his commitment to duty.

"We were pleased to work with the California State University San Marcos to make this gift of protection possible for Armor through our K-9 vest grant program,” said Sandy Marcel, the president for Vested Interest in K9s, Inc. “Ballistic vests are vital to both human and K-9 partners.”

The program is open to dogs actively employed in the U.S. with law enforcement or related agencies who are certified and at least 20 months of age. New K-9 graduates, as well as K-9s with expired vests, are eligible to participate.

The university enrolls approximately 14,000 students. With approximately 2,000 employees, the institution is a Great College to Work For® (The Chronicle of Higher Education). As a recipient of the annual HEED Award since 2014—a national honor recognizing U.S. colleges and universities that demonstrate an outstanding commitment to diversity and inclusion—CSUSM is committed to creating a diverse and inclusive environment.