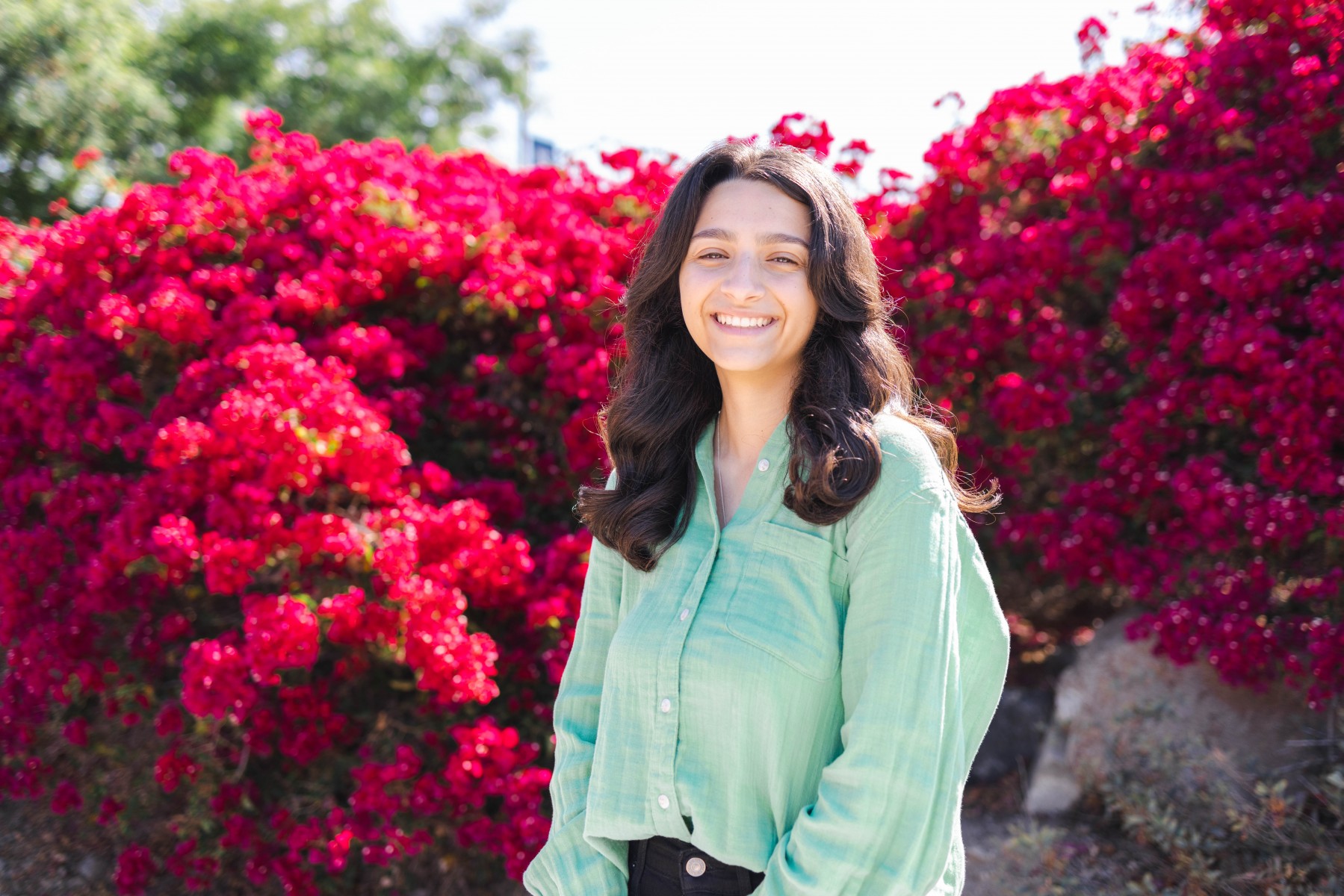 As the fall semester approaches, political science student Julia Glorioso is preparing to serve the CSUSM student body as the president of Associated Students, Inc. Photo by Alicia Lores

When Julia Glorioso was in third grade, she took a field trip with her classmates to visit Cal State San Marcos.

The trip was a way of getting young students to think about their educational futures. But for Glorioso, this was a trip to remember. A photo of Glorioso with other students on CSUSM’s Mangrum Track & Field during the visit even made it into the local Valley Center newspaper.

The experience certainly had a lasting impact. A decade later, Glorioso made her way back to campus, this time as a university student.

“Cal State San Marcos has provided me more than I could have ever thought possible,” said Glorioso, a political science student who will graduate next May. “All the opportunities that I've been able to be a part of, I don't think it would have been the same if I went to another university.”

Glorioso has certainly made the most of those opportunities. As the fall semester approaches, she is preparing to serve the CSUSM student body as the president of Associated Students, Inc.

As ASI president, Glorioso had the opportunity this summer to be a student representative at the Panetta Institute for Public Policy where she met state legislators, politicians and members of Congress. Glorioso was encouraged by Ann Elisabeth Rondeau, the president of the Naval Postgraduate School in Monterey, to direct the upcoming goals for the school year toward connecting, communicating and focusing on ways to reach students.

Glorioso never could have imagined in high school that she would be in a position that seemed to be made for extroverts. As a teenager, Glorioso didn’t find herself to be involved and mostly kept to herself.

“I was a more introverted person in high school,” Glorioso said. “I really wanted to be like the other students that were involved in ASB, but I felt like in high school you have your cliques. It’s just a much different environment, and I couldn’t really find my place. After graduating high school, I really regretted not just getting out of my comfort zone more and taking advantage of opportunities. I told myself, ‘When I get to college, I’m not going to do that. I’m not gonna let myself be held back by anything. It’s a new, fresh start.’ ” 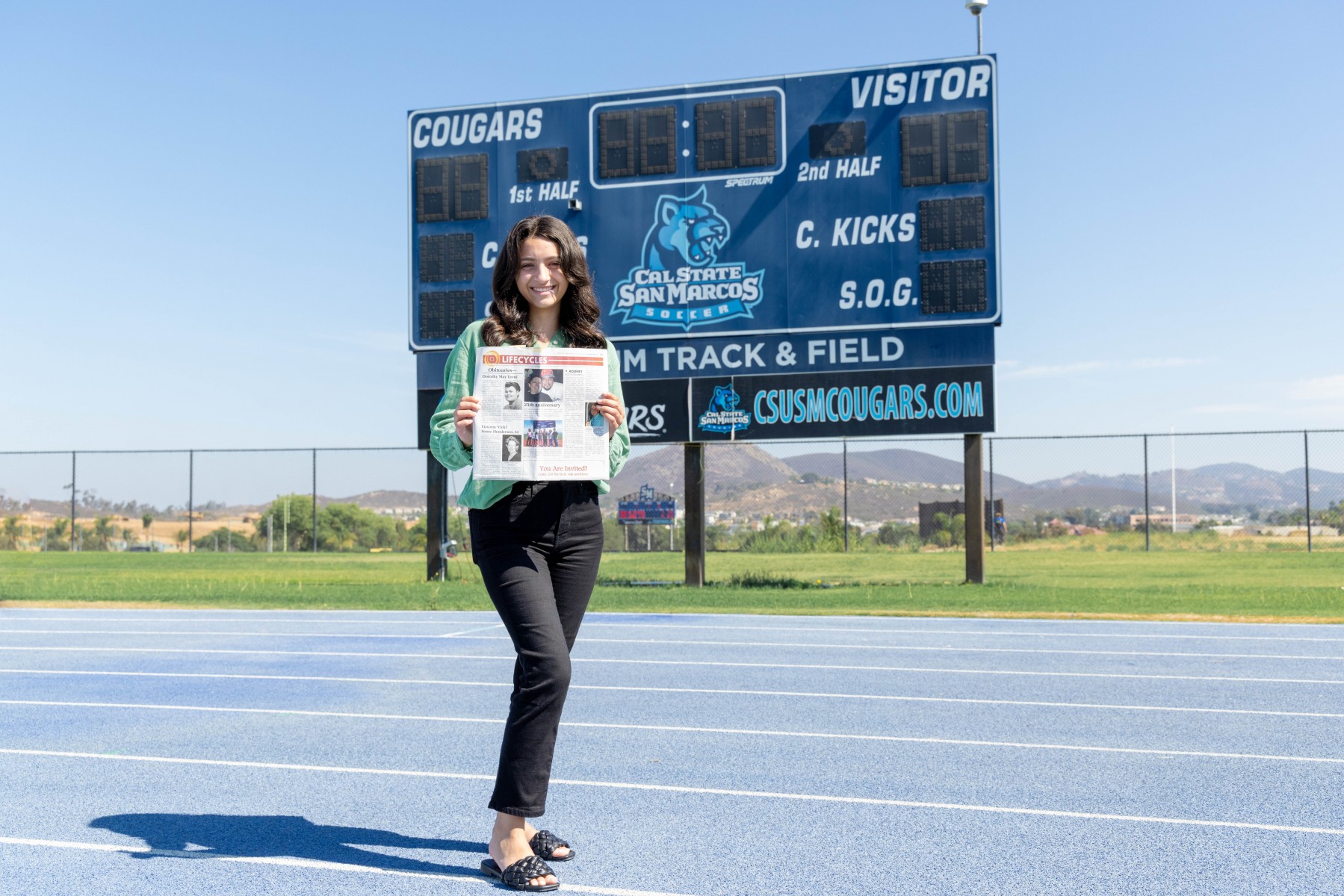 When Julia Glorioso was in third grade, she took a field trip with her classmates to visit CSUSM’s Mangrum Track & Field. Glorioso, who is now a CSUSM student, still has a copy of the Valley Center newspaper that published a photo from the field trip. Photo by Alicia Lores

Glorioso wasted no time, talking to all the student organizations at her freshman orientation to see how she could get involved. She learned about ASI’s volunteer groups and decided to try Lobby Corps, which is dedicated to advocacy in higher education policy.

Joining Lobby Corps was the push Glorioso needed to get comfortable sharing her thoughts and opinions. Glorioso had the opportunity to speak in front of state legislators when she attended a lobbying trip at the Sacramento Capitol, which was something she wouldn’t have thought of trying in high school.

“I’m going to be in ASI for my whole four years, and that was my favorite experience that I’ve had because it did exactly what I wanted it to do,” Glorioso said. “I was able to completely get out of my comfort zone. And I think I just learned from that experience that I really do enjoy public speaking. I just needed to build my confidence in that, and I think that ASI is a perfect opportunity to continue doing that.”

Glorioso saw firsthand what it was like to be an ASI officer as a member of Lobby Corps. She always kept in mind how she would one day like to run for a position.

Michelle Tran, the former ASI vice president of student and university affairs, encouraged Glorioso to apply to be the College of Humanities, Arts, Behavioral and Social Sciences (CHABSS) representative. Glorioso took Tran’s encouragement as a sign, and she made the application deadline the same day it was due. As the CHABSS representative, Glorioso advocated for students in the college.

Now, as ASI president, Glorioso has another opportunity to help students before graduating next May.

“I’ve seen Julia become an exceptional leader to ASI over the past year that I’ve gotten to work with her, and am so excited to grow professionally with her leadership,” said Ernest Cisneros, vice president of student and university affairs.

When Glorioso is not fulfilling her duties as ASI president, she is working at the district attorney office in North County where she reviews restitution cases and reaches out to victims. Glorioso is also studying for the Law School Admission Test, commonly known as the LSAT, with plans to attend law school.

Glorioso’s busy schedule calls for significant drive and determination, and she credits much of that tenacity to her grandparents.

“My grandparents were both Italian immigrants, and I think their values really influenced me,” Glorioso said. “They were very hard workers who started from the bottom up. That always really impacted me and impacted my work ethic.

“They always put a large emphasis on education. They were not able to get an education. They stopped at third or fourth grade. So it will be really exciting to be the first to pursue a law degree in my family. And I think my mom and my dad are already excited for me.”