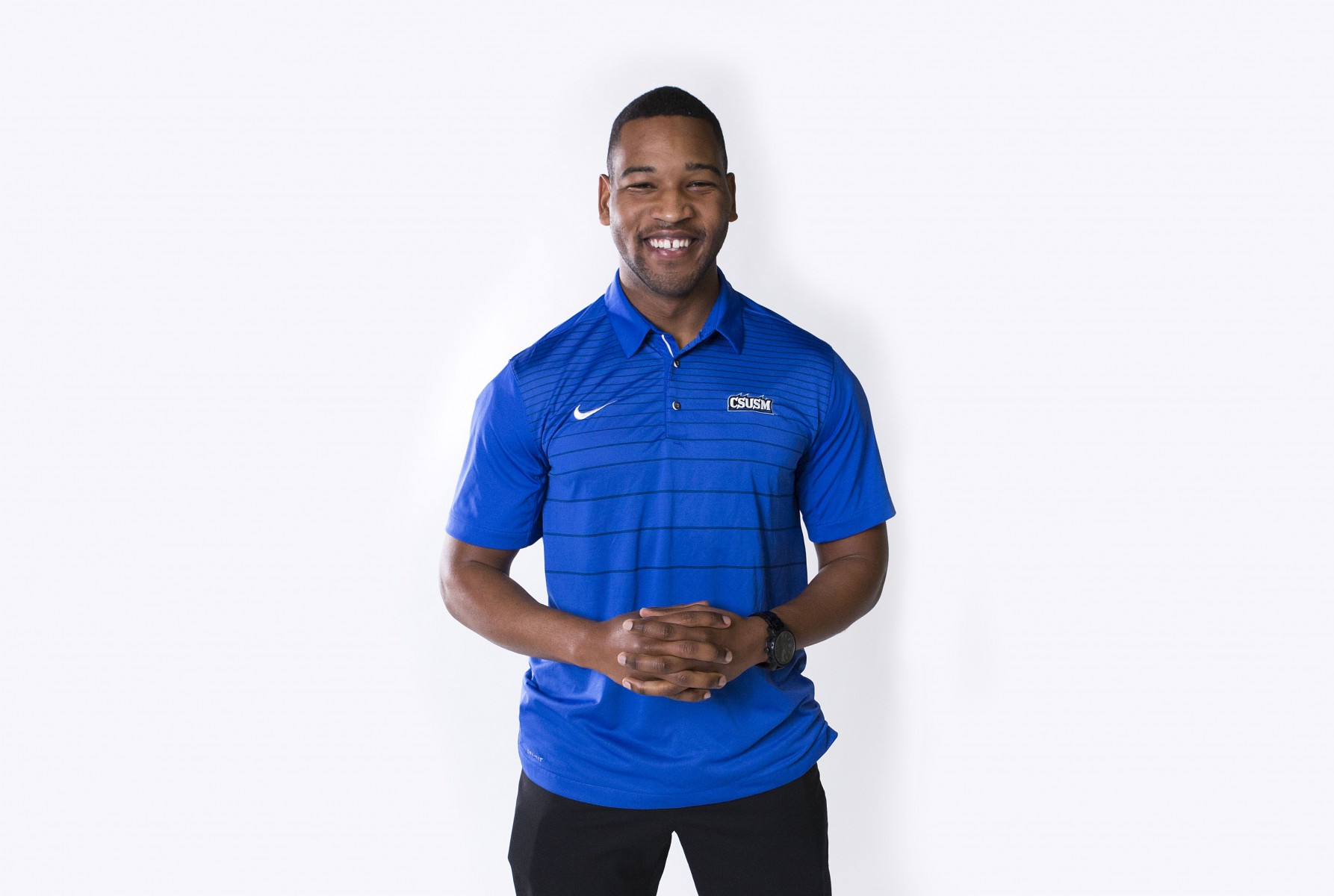 Involvement is the one constant in Louis Adamsel’s life. His college résumé is impressive – volunteer work, academics, fraternity life, National Guard reserves, on-campus employment and leadership in student government. There is almost no leadership opportunity Louis has missed during his time at Cal State San Marcos.

But Louis laughs off his hectic schedule.

“At the end of the day, I’m a student first,” he said. “I’m doing things I love. When I’m in class, I’m thinking how I can apply what I’m learning to real life.”

Louis certainly didn’t imagine his current calendar and responsibilities when he was growing up.

Louis was born in South Los Angeles, the youngest of six children. His mother died when he was 5 years old, and he and his siblings moved in with his aunt, who then relocated to Moreno Valley. Louis credits his childhood with teaching him independence, and he began to think about the future.

“It was cool to think about college, but I didn’t know for certain if I was going to go,” Louis said.

He was initially accepted to CSUSM, but after meeting a National Guard recruiter in high school he realized that the discipline of the military would help him prepare for college and beyond. He put his university plans on hold for a year and enlisted.

Just a few weeks after he graduated high school, Louis arrived at Fort Benning, Georgia, for boot camp, followed by ordinance school in Fort Lee, Virginia, where he trained as a mechanic.

“That’s where I got the best training of my life,” he said. “I was with such a diverse group of guys from different ages, socioeconomic classes and ethnicities. My military experience exposed me to different perspectives, which taught me a lot.” 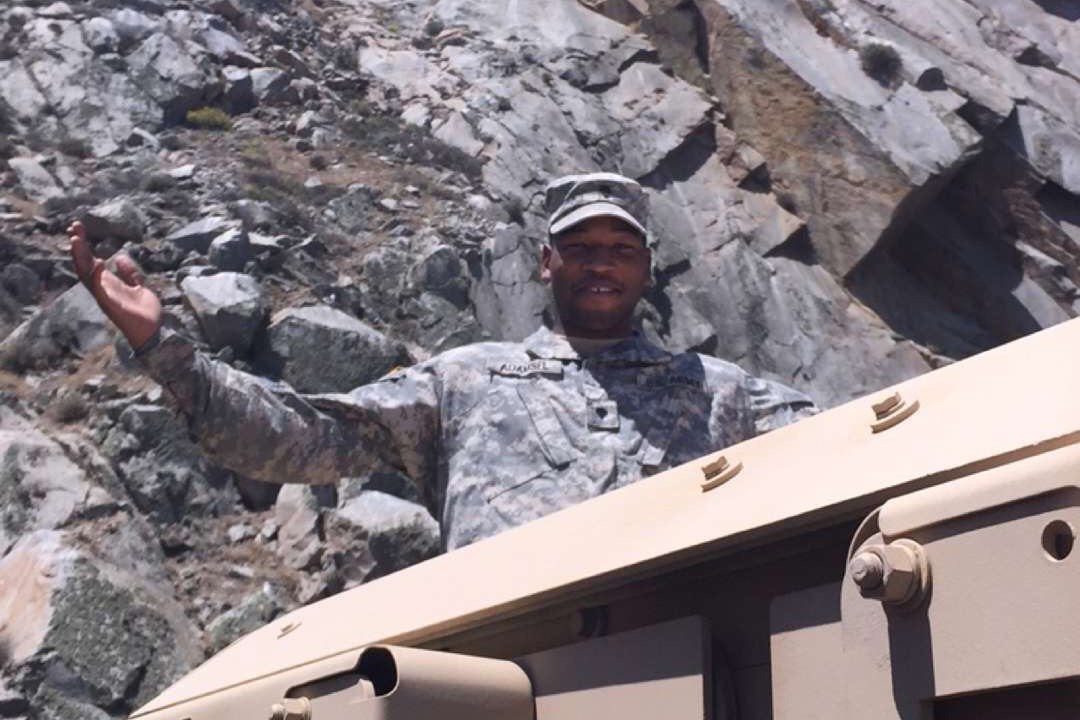 Louis applied to CSUSM again, this time a little more prepared for the process, and moved to San Diego to begin connecting with resource offices and support services on campus while continuing to serve as a National Guard reservist. It wasn’t easy. Louis took a three-hour bus ride to get to CSUSM over the summer to complete math requirements and to get to know his campus advisers in Veteran Services and the Educational Opportunity Program.

Although Louis originally declared a pre-nursing major, introductory courses in the humanities led him to find his passion for Communication – one that bled outside of his academic interests to many other areas of his campus life.

Louis moved into campus housing, making friends and campus connections everywhere he went. As one of the first Jamba Juice employees in the newly opened University Student Union(USU), he got to know peers involved in leadership in the many centers and organization housed in the USU. These connections opened his eyes to the opportunity for leadership and involvement.

In Louis’ junior year, a close friend recruited him to help bring a historically black fraternity, Omega Psi Phi, to campus. Though he didn’t think Greek life was for him, he began to volunteer with the organization.

“You don’t need letters to help people who need it,” he said. “But when I saw what brothers were doing, I knew that’s what I wanted to do. And I knew we could make a bigger impact together.”

His friends were persistent, and he decided to run as the College of Humanities, Arts, Behavioral and Social Sciences (CHABSS) representative for ASI. Once elected, he sought ways to represent diverse student voices.

Louis was called on to serve and sit on committees across campus as a student representative – and the list is long: Graduation Initiative, Chief Diversity Officer hiring committee, Student Philanthropy Council, Black Faculty Staff Association, Peer Mentoring Program (as mentee and mentor), helping to host the TEDx event and speaking to the Board of Trustees.

As CHABSS representative, Louis had a front-row seat to see how ASI worked and realized he could serve this campus in an even greater way as ASI president.

“As ASI president, you really have to stop thinking about just yourself and really think of the best interest of the whole student body,” said Louis, who was elected to serve the 2017-2018 term as ASI president.

It has been a busy year for ASI, opening the 24/5 space in partnership with the Library, increasing the distribution and growing the Cougar Pantry program, passing a resolution for Project Rebound, as well as working on sustainability projects. Of all his accomplishments, one that he’s most proud of is making inclusive changes that allowed more student access to leadership positions.

“Everything I do is because it’s a passion,” he said.

His warm demeanor and endearing smile makes him friends wherever he goes.

“As ASI President, Louis is very thoughtful on how decisions will affect all students and very open to understanding differing views and opinions,” said Annie Macias, Interim Executive Director of ASI. “But the first thing you notice about Louis is his great smile and warm demeanor. You can often find him walking across campus, shaking hands with almost every student, calling them by name and listening to some shared personal or academic issue.”

Louis stays on top of it all through personal discipline, which he credits to both his military experience and the guidance he has received from his mentors in Omega Psi Phi.

So what’s next after he graduates this spring?

“I think first, I’m going to take a nap,” he said, laughing. “Going to officer candidacy school is an option, as well as getting another degree. I know I want to end up back in school, I want to help historically underrepresented students – especially young African American men – and I want to find success, so I can put myself in a position to continue to help others.”

Louis and other ASI Representatives at the NCAA Celebration
Louis Adamsel, ASI President

Cal State San Marcos has hired Derek E. Wilson, an alumnus and enlisted Marine veteran with a passion for helping veterans, as its next director of Veterans Services.He will begin his tenure on Feb. …
Read more