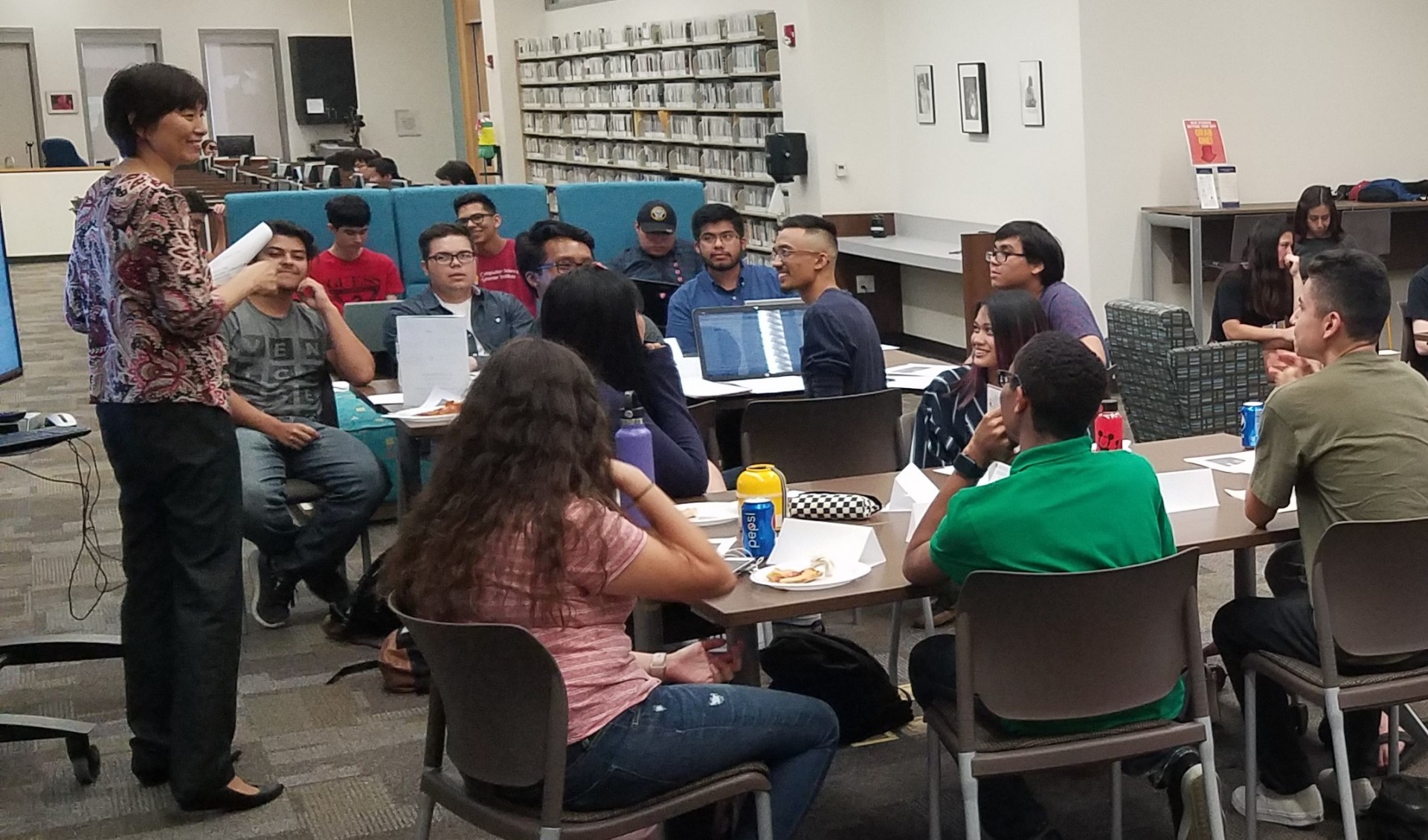 Youwen Ouyang and Marisol Clark-Ibáñez first connected in a meaningful way almost a decade ago at a summer “boot camp” for Cal State San Marcos faculty.

Clark-Ibáñez was a coach for the program designed to introduce e-learning to faculty members. Ouyang, eager to try something new, was the only science professor in a cohort filled with colleagues from the sociology department.

Despite their vastly different academic fields – Ouyang in computer science, Clark-Ibáñez in sociology – the two hit it off immediately. It was the start of a close friendship, and a wonderful professional partnership that stands to benefit CSUSM students for years to come.

In 2017, Ouyang and Clark-Ibáñez teamed up to secure a five-year, $1 million grant from the National Science Foundation to fund scholarships, workshops, mentors and networking opportunities for computer science majors from low-income families.

Now, with that program thriving, the two professors are back for more, this time targeting computer science students as they first enter the university.

Ouyang and Clark-Ibáñez were the faculty behind a proposal that resulted in CSUSM last month being named one of only six project teams in the state to receive full funding in the first set of awards from the California Education Learning Lab, a new program that seeks to close equity and achievement gaps in STEM and other disciplines.

CSUSM was selected to receive a Learning Lab award of more than $1 million over three years. Ouyang and Clark-Ibáñez submitted the proposal along with Nery Chapetón-Lamas, a computer science professor from MiraCosta College, and the team was one of just six in California granted a full award out of 42 turned in across the state.

“To me, this grant means opportunity for my students,” said Ouyang, chair of the computer science and information systems department. “That’s what drives a lot of my proposals.”

One of Ouyang’s grants, nicknamed “CodeQueens,” focuses on helping high school girls learn more about STEM career paths. Another, the 2017 one procured with Clark-Ibáñez, is dubbed “Fab Fridays” and involves upper-class computer science students being mentored by industry partners and working on real-world projects at an on-campus makerspace. 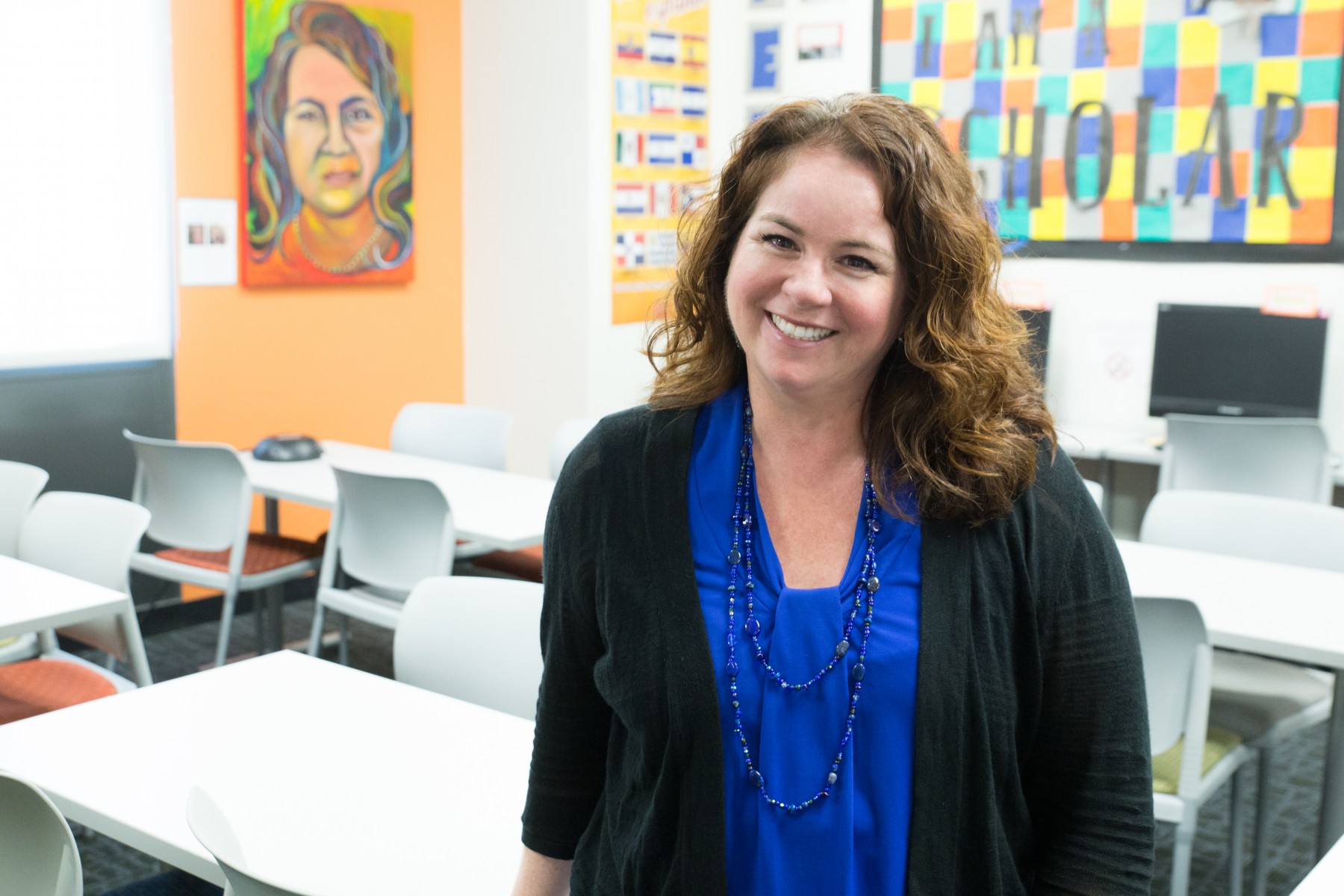 Marisol Clark-Ibáñez
The chair of the sociology department has teamed with colleague Youwen Ouyang on multiple grant proposals. Photo by Christine Vaughan

The most recent grant will service a different population – of the age between prospective CSUSM students and the upper classes – but with a similar hands-on approach. Assisted by Clark-Ibáñez, Ouyang will overhaul the university’s two introductory computer science classes (CS 111 and CS 211) to make them more student-driven and less lecture-based – with the objective of keeping students from giving up on the subject before they ever have a chance to get hooked. Because CSUSM and MiraCosta are minority-serving institutions, they also include elements to the pedagogy and content that are culturally relevant.

In writing the proposal, Ouyang compared a typical computer science lesson plan at the high school level with that of an introductory college course. She found the difference to be stark. The former was exciting and engaging, the latter dry and off-putting.

“As a non-computer science person, I could understand the high school problem. I could understand the bigger picture of what it was trying to get at,” said Clark-Ibáñez, chair of the sociology department. “The college version of what she pulled out to do a side-by-side comparison was so involved with solving proofs and the critical thinking went away. It was just computation.

“Youwen will be working to transform these intro classes that can really turn off students. They told us they were so excited to be in the major and then they get to their first class and they’re like, ‘Oh God, this is so horrible.’ ”

Ouyang said she hasn’t taught a course for a few years, but she plans to return to the classroom this fall after having redesigned CS 111 during a faculty in residence program at Google headquarters in June. She will come back to teaching with a different perspective born of her experience with Fab Fridays and other projects.

“When I was in the classroom, my students were pretty quiet and I didn’t see much wrong with it,” Ouyang said. “I was thinking the teacher’s role is to explain things to students. Now I’m seeing things very differently.”

The CSUSM professors plan to incorporate the Open Learning Initiative offered by Carnegie Mellon University in Pittsburgh, a collection of evidence-based tools and approaches to learning that are proven to boost student success, and enable instructors to be more effective. While Ouyang teaches the course, Clark-Ibáñez will utilize her expertise in sociology to ensure that the material and the research accounts for the racial, cultural and gender diversity of CSUSM’s students.

“It’s going to be a very innovative approach,” Clark-Ibáñez said. “The goal is to have students coming in to be hooked right away, to feel like they are honored as a whole person.”