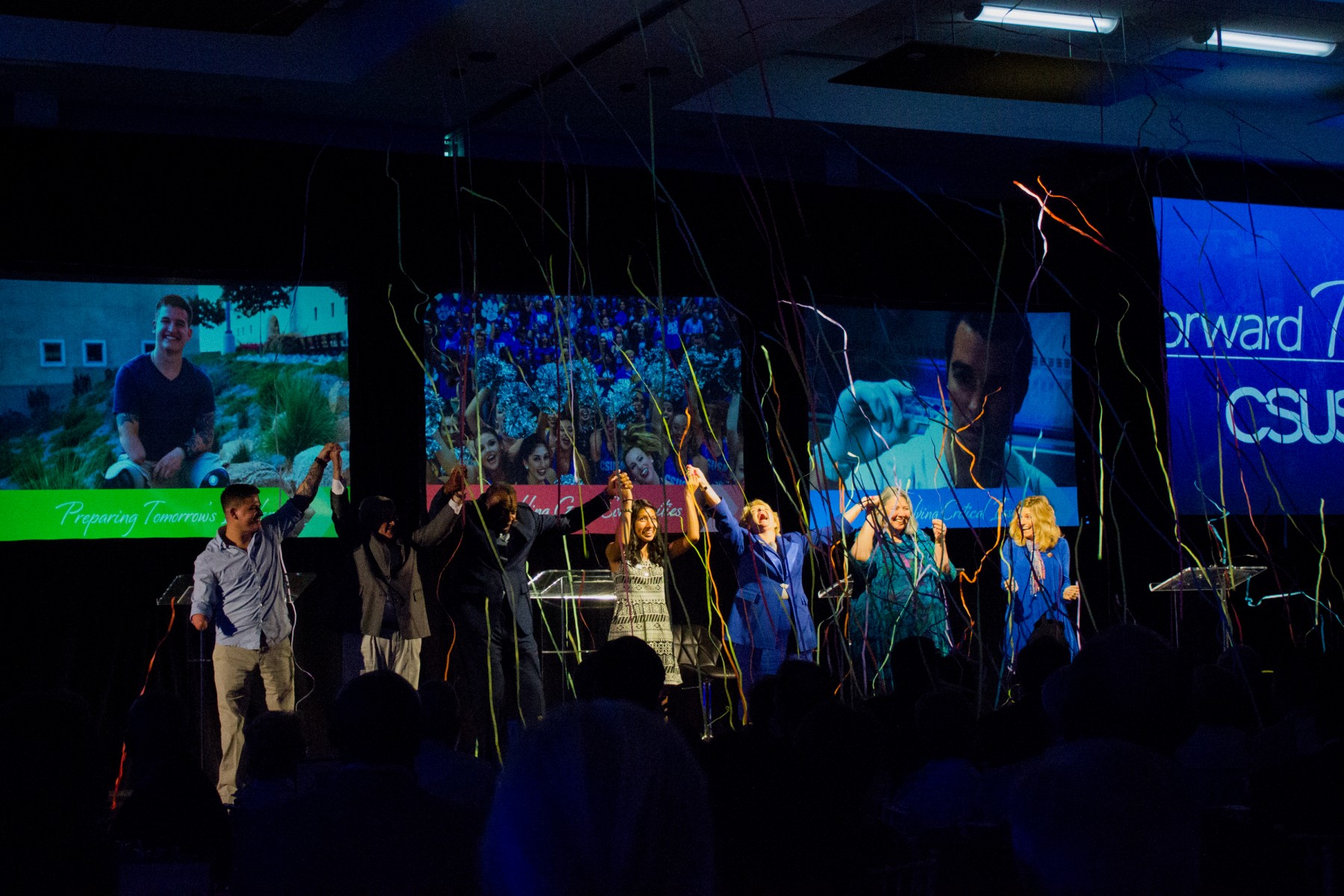 Forward Together
Students and donors join CSUSM President Karen Haynes (third from right) at a celebration to launch the university's first comprehensive campaign in September 2015.

The first gift of the day came in just after the clock struck midnight. By 6 a.m., when the late-autumn sky was still dark, 114 donations already had been made.

By the time the 1,488th and final gift was registered at 11:59 p.m., CSUSM – with the help of matching gifts from Jack Raymond, chair of the university’s Foundation Board – had raised $448,955 in a single day. That’s an astounding increase of 2,877 percent over the inaugural Giving Day three years earlier.

When President Karen Haynes announced the launch of CSUSM’s first comprehensive fundraising campaign at the University Student Union ballroom in September 2015, surely there were skeptics. How could a university that only recently had celebrated its 25th birthday hope to raise $50 million, which was double the goal that initially had been proposed by the Foundation Board? Most comprehensive campaigns are built chiefly on the strength of alumni, after all, and CSUSM – as young as it is – simply doesn’t have a vast pool.

The remarkable growth of Giving Day, however, is just one of the many signs that what CSUSM lacks in age, it more than makes up for in ambition. Haynes’ financial target for the Forward Together campaign might have sounded audacious to outsiders, but it was par for the course to anyone familiar with this campus and its leader.

“I am fairly comfortable with bold goals if I think that they are attainable,” Haynes said. “Yes, it was a little scary, but it pushed all of us to stretch to say it is possible. I just thought the $50 million number felt right for this campus and the way we acted.”

As it turned out, the $50 million figure not only was attainable, but it was surpassable. When Forward Together officially ended as the calendar turned to 2019, the campaign had blown past its objective, ultimately landing on $55,035,210 as the amount raised.

How impressive is that? Consider that CSUSM raised more in the seven years of the campaign than it had in the first 21 years of its existence combined. Consider that nearly three-fourths of the university’s alumni graduated during Haynes’ tenure as president.

It’s difficult to establish with certainty, but CSUSM does have good reason to boast that it’s the youngest university in the nation to undertake such an ambitious fundraising challenge at such a young age.

And if not in the nation, it’s certainly the youngest in the 23-campus California State University system. As if inspired by the boldness of CSUSM, exactly a year after the public launch of Forward Together, Cal State San Bernardino – a university then twice as old as CSUSM – announced that it was embarking on its own $50 million campaign. The very next month, Cal State East Bay – a school that was more than twice as old and has an alumni base nearly three times as large – set off on a $60 million campaign.

“I think some of them got the impetus, whether their presidents would admit it or not, to say, for example, ‘Why can’t East Bay do it at 60 years for $60 million?’ ” Haynes said. “So there was a little skepticism around the CSU about our campaign, but there were some that thought, ‘Wow, we’ve never done it and we’re 60 years old, we’re 80 years old.’ ”

Because of its limited institutional history, Cal State San Marcos approached the campaign in its own youthful, scrappy, entrepreneurial manner – what might be called the “CSUSM way.” Most universities carefully arrive at a campaign goal figure by hiring a council that does an assessment based on its donor base. CSUSM did it based on a round, impressive number thrown out by its president during a Foundation Board retreat in 2012.

“The meeting where we came up with the dollar amount, I wouldn’t recommend that for other institutions,” said Cathy Baur, vice president for University Advancement. “But it says a lot about our fortitude, our willingness to take a gamble and know that we have a good story to tell and have such strong support in the region that we could actually make it happen.” 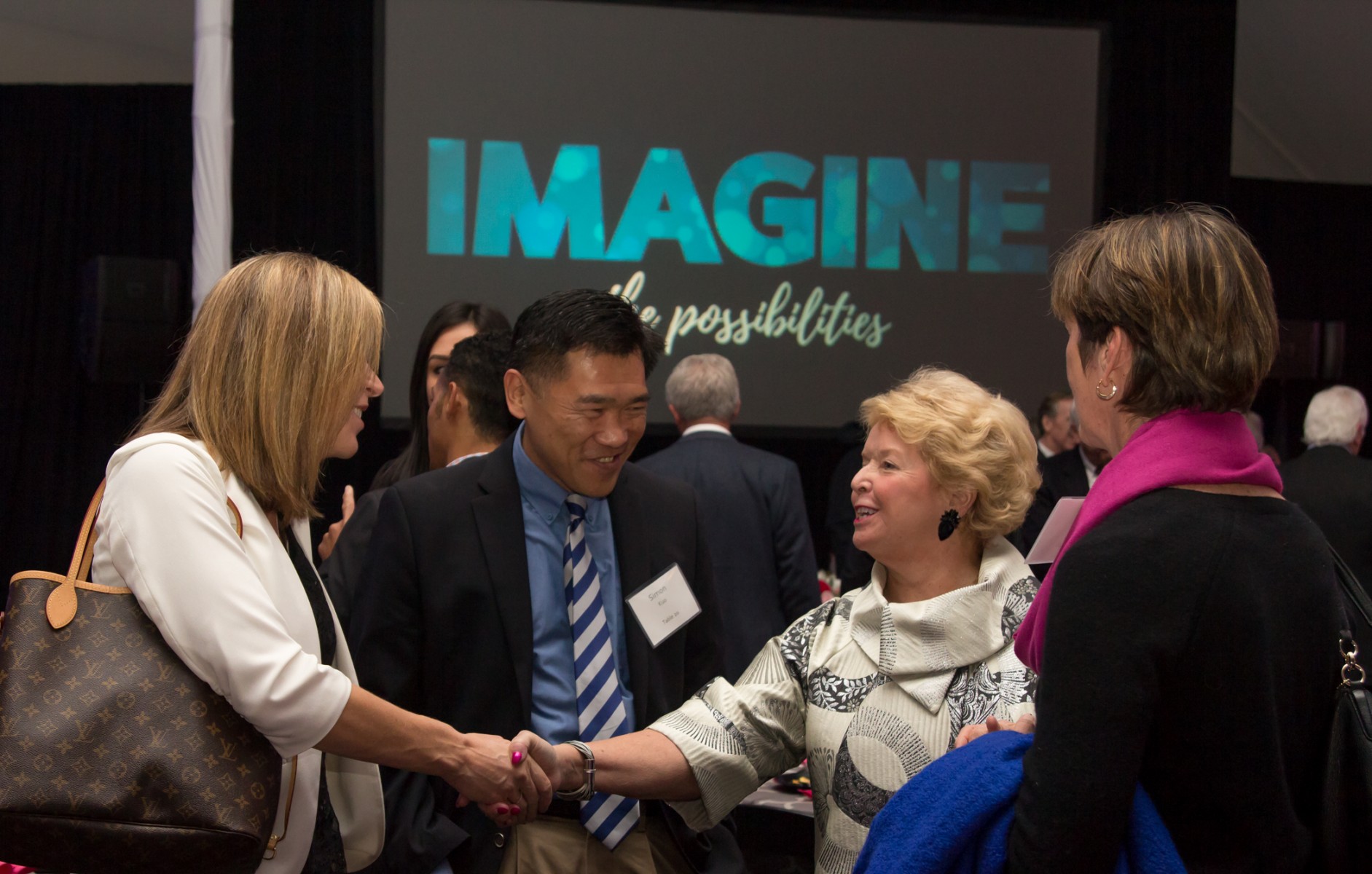 Forward Together
The bold leadership of President Karen Haynes (second from right) was crucial to the success of the campaign.

Most universities structure campaigns around a series of major gifts from well-heeled alumni. CSUSM did receive a number of donations of at least $1 million, but Forward Together would not have succeeded without the committed participation of a veritable army of staff, faculty, students, alumni and community members making sometimes small but meaningful contributions.

“We always viewed this campaign as the one to prepare us for the next campaign,” Baur said. “Part of our goal was to build and work on that culture of philanthropy. We really feel like we have done a good job with that. Every single senior manager on this campus contributed to the campaign through either a one-time gift or a multiyear pledge. I think that’s indicative of the commitment people have to this university.”

Major fundraising campaigns, of course, didn’t used to be the province of CSU schools, which only a couple of decades ago received about 80 percent of the money for operating costs from the state. That number has fallen to 55 percent, with student tuition and fees accounting for the rest. Yet CSUSM continues to grow, both in students and in stature, and the demand for cutting-edge programs and services from the surrounding region only intensifies.

That desire for transformational change in the face of ongoing financial belt-tightening by the state was the motivation for Forward Together, which was built around the three pillars of “Preparing Tomorrow’s Leaders,” “Building Great Communities” and “Solving Critical Issues.”

“In my early years in this business, there were people who would say, ‘I don’t know what you suits are doing here, but if you’re raising money, don’t raise it for my program,’ ” said Kyle Button, the associate vice president of development, who was recruited by CSUSM to help run the campaign in 2014, a year before the public launch.

“The idea was that they’d never get the money back from the provost or the state if they saw their program as appealing to private support. We don’t hear that so much anymore. The game has changed. We’re now a part of doing business.”

Once the campaign priorities were established, it was time to venture out into the philanthropic community and do a little storytelling. And CSUSM knew it had good stories to tell.

Katherine Kantardjieff had come to CSUSM in 2011 from Cal State Fullerton, where she had gained experience in fundraising as a chemistry professor. In her new position as dean of the College of Science and Mathematics, she was sent on something of a road show around San Diego with a development officer, meeting with potential donors and heralding the innovative people and programs in her college. She came armed with so-called “wow” statements, and perhaps her most powerful one was about CSUSM’s proposed EngiBeering certificate program that would explore the science and engineering behind brewing craft beer – a powerful message in San Diego, which has come to be nicknamed the “Capital of Craft.”

“The end of the wow statement was, ‘Come join us and help us fuel a billion-dollar industry because life is too short for bad beer,’ ” Kantardjieff said. “It was all about getting people’s attention and making them feel good and making them want to know more.”

Kantardjieff also put together an advisory council in 2012 composed of “a team of people that was chomping at the bit to champion for this university.” One of the members was Simon Kuo, the vice president of corporate quality for Viasat, and it was partly through the cultivation of that relationship that CSUSM in early 2018 received $1.5 million from the Carlsbad-based global communications company (along with several employees) to become the founding partner of the university’s engineering program.

“It’s not that easy to fundraise. You have to have a compelling vision,” Kantardjieff said. “When it comes to engineering, the reason we got a donation from Viasat is that the community believes we can do this. We have their trust, we have their confidence. They know we can deliver.”

The gift from Viasat was far from the only one that will cause real and lasting change at CSUSM. Jan and Esther Stearns donated $1 million to ACE Scholars Services, the university’s one-of-a-kind program to support former foster youth. The Epstein Family Foundation gave $1 million toward a much-needed physical expansion of CSUSM’s Veterans Center. A small group of donors made it possible for the university to become an All-Steinway School, a designation held by fewer than 200 colleges, universities and conservatories worldwide. And for the first time in the 2017-18 academic year, more than a million dollars was dispersed to students in privately funded scholarships.

“Those are the kinds of quantum leaps that you want to create through a comprehensive campaign,” Button said. “The results are visible and palpable and real, and that does make a good case in the future for the next campaign of support.”