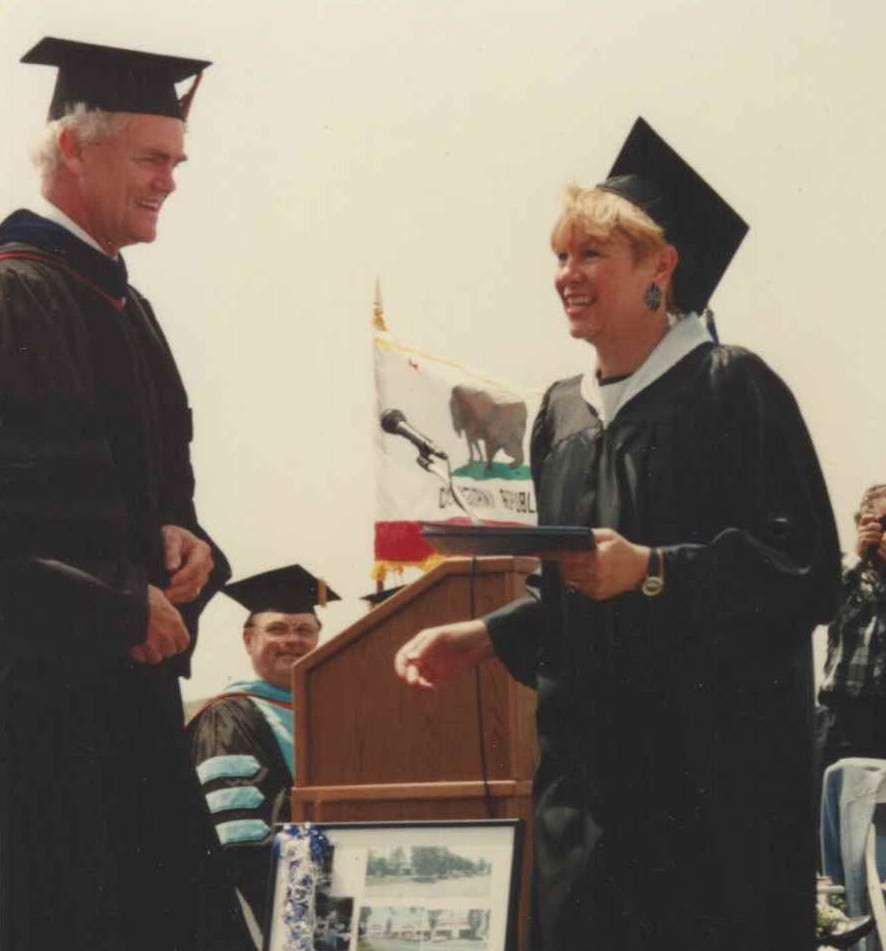 Being first can be intimidating for some. But, if you’re Tanis Brown, the opportunity is empowering.

The San Marcos resident of 40 years and mother of four has trail blazed many firsts with CSUSM. Her first introduction of what would become a long love story with her future alma mater began in the late 1980s when she met Dick Rush and Bonnie Biggs, who were among the founding leaders transitioning the SDSU satellite campus into Cal State San Marcos.

The city was abuzz with energy and optimism for what this new public university would become, and Tanis wanted to be part of it. At the age of 43, she enrolled with the first cohort of students and began attending classes at the small storefront property off Los Vallecitos while the permanent campus was being built across town.

"I vividly remember the feeling of excitement that surrounded all of us," Tanis recalled. "We were driven students, anxious to our part to our university up and running. It was a unique time in our history."

Ready to leave her mark, Tanis decided to run for student government and was elected to the first Associated Student Council. She used her community connections to forge collaborative partnerships and often met with regional and state political leaders, including Senator Craven, to advocate on behalf of CSUSM.

“As the first class, we always looked forward and considered the next generation of CSUSM students who would follow in our footsteps,” she said. “We wanted to make them proud–and that fueled our pioneering spirit.”

That sentiment continues to be echoed by students today. The early class also set into motion a trend of paying it forward. The Class of 1992 were the first to vote, approve and begin paying a student fee to fund the future student union–a building they would never see during their time as students. In fact, those same students graduated before the permanent campus was finished. The first commencement ceremony was held in Craven Circle in the shadow of scaffolding and construction–and among those in cap and gown was Tanis.

Wanting to stay connected after graduation, Tanis was a founding board member of the Alumni Association while working as a grant writer at Lifeline Community Services. But she couldn’t stay away from her campus for long and soon was back working on special projects as an employee. In 1995, Tanis established CSUSM’s first housing program for students. The University was welcoming its first incoming freshmen class that fall, but didn’t have on-campus housing. Contracting with a nearby apartment complex, Tanis and her team furnished apartments, hired resident assistants, paired roommates and helped the first group of freshmen move into university-affiliated housing. A few years later, Tanis moved over to human resources to develop new employee orientation and training programs, before retiring in 2007.

Naturally, when CSUSM formed its first Retirees Association last year, Tanis was among the 14 founding members, ready and eager to connect and serve. Today, as the current president of the San Marcos Historical Society, Tanis has the unique vantage point of seeing the impact of CSUSM–both in its historical context and in her own life.

“These last 25 years are incredibly telling of the great trajectory our University and community is headed toward,” Tanis reflected. “That innovative and pioneering spirit that built CSUSM still thrives on campus today.”