At 100 Years Old, Ruth Ann Waters is Devoted to Students 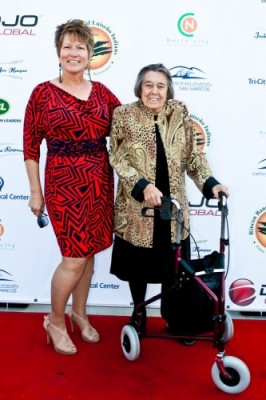 August 16, 2015 is the momentous day that Ruth Ann Waters turns a century old. A native San Diegan, she has certainly seen the world change significantly. In her lifetime, the United States has had 17 presidents, American women gained the right to vote, the Great Depression ensued, several wars played out across the globe and the first man set foot on the moon. Ruth Ann was even present on the day that the City of San Diego installed its first traffic signal in the Gaslamp Quarter and she remembers fondly a more simpler time when you could buy ice cream from a cart on Market St. for a nickel.

Over the years Ruth Ann, who was married from 1947 to 1985, served in a number of professional roles, including her last position as a manager of over 40 Southern California escrow offices at Security Pacific Bank. But perhaps her most significant position was serving as the secretary to Mr. Lawrence Fenstermaker at the 11th Naval District, headquartered in San Diego in the 1950s.

During the nearly 10 years that she worked for Mr. Fenstermaker, she earned his trust and respect. So much so that when he passed away in 1995, he named Ruth Ann in his will to become a member of the five-person board of directors that would be responsible for overseeing the private charitable foundation that he endowed with his estate.

In 1996 the Fenstermaker Foundation became one of CSUSM’s early donors and to this day remains one of its most dedicated supporters. The Foundation annually provides merit scholarships to CSUSM students majoring in biology, chemistry or computer science, often supporting students throughout their undergraduate career and into graduate school.

“Early on we selected CSUSM because we felt we could make a difference there,” reflected Ruth Ann, who has been so staunchly devoted to the campus that she has not missed a single Gala or schinterview in 17 years, personally getting to know each student that receives a Fenstermaker scholarship. “We wanted to truly be a part of the campus and it has been fun.”

Looking back on her lifetime, she says that she is most proud of her 17 years of volunteer work with the San Diego Floral Association, founded in 1907 by the world-famous horticulturalist Kate Sessions. But perhaps most of all, she’s pleased to see the impact that the Foundation has had at CSUSM.

“If you give a gift, leave it to education— it’s one of the most wonderful things."

To learn how you can make a gift to CSUSM for scholarships, contact University Advancement at 760-750-4400 or visit www.csusm.edu/giving.

At 100 Years Old, Ruth Ann Waters is Devoted to Students