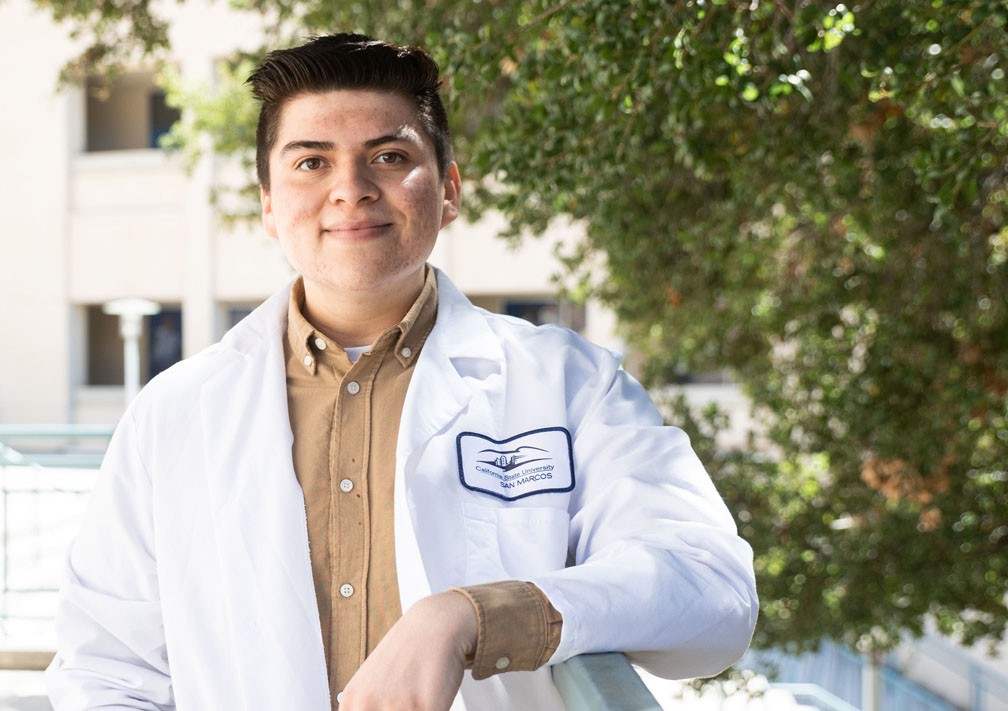 Ivan Gonzalez is a first-generation Mexican American senior majoring in biological sciences with a minor in Spanish.

Cal State San Marcos student Ivan Gonzalez has been selected as the campus’ recipient of the 2021 Trustees’ Award for Outstanding Achievement, the California State University’s highest recognition of student accomplishment.

Students are selected for demonstrating superior academic performance, personal accomplishments, community service and financial need. Awardees have all demonstrated inspirational resolve along the path to college success, and many are the first in their families to attend college.

The CSU recognizes 23 students every year – one from each campus – with the Trustees’ Award, which includes a donor-funded scholarship ranging from $6,000 to $15,000. Gonzalez was named a Chancellor Emeritus Timothy P. White Scholar.

Gonzalez and the other awardees will be recognized during a ceremony as part of the CSU Board of Trustees virtual meeting on Sept. 14.

Gonzalez is a first-generation Mexican American senior majoring in biological sciences with a minor in Spanish. He has taken active roles in the Educational Opportunity Program, College Assistance Migrant Program and the Pre-Health Society.

Gonzalez has engaged in research as a biophysiologist focusing on comparative, integrative and evolutionary vertebrate physiology, and is currently studying lepidopterans (an order of insects that includes butterflies and moths) and their electro-physiology. He also serves as a medical intern and interpreter at Palomar Medical Center, where he assists medical providers and patients.

Upon completion of his bachelor's degree, Gonzalez plans to attend graduate school and pursue a career as a physician assistant.

“These 23 scholars wonderfully exemplify the ideals of the California State University," CSU Chancellor Joseph I. Castro said. “Every year, and especially this year, our Trustees' Award honorees demonstrate resilience, tenacity and resolve — together with a keen intellect — while making an indelible, positive impact on their families and their communities. They are truly an inspiration."

More than 400 students have been honored with the Trustees' Award since the scholarship program was established in 1984 by the William Randolph Hearst Foundation. In 1999, the Hearst Foundation partnered with the CSU Board of Trustees to supplement the endowment with contributions from CSU Trustees, CSU Foundation board members and private donors. Each student scholarship bears the name of a donor.