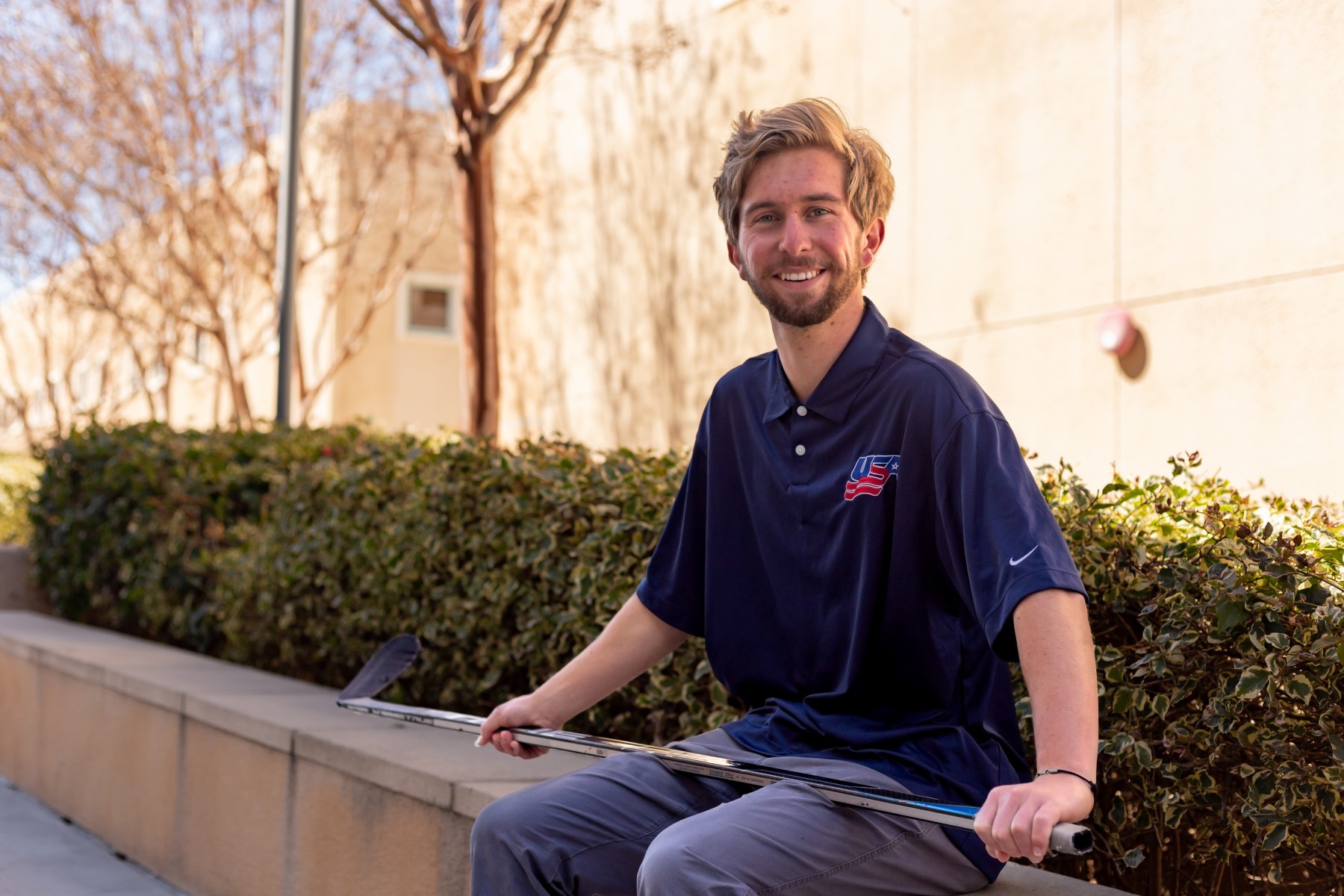 Blake Steinecke had no interest in playing blind ice hockey. He didn’t even know the sport existed until someone in a Facebook support group for people afflicted with an inherited form of vision loss told him about it.

It didn’t matter that Blake regularly played ice hockey and roller hockey while growing up in San Marcos. Just the name blind ice hockey made him cringe.

“I thought, ‘That sounds like some silly, adaptive sport. It’s not going to be the same game. I wouldn’t want to play that,’ ” said Blake, who became legally blind when he was 16.

But people in the Facebook group, knowing Blake’s affinity for sports, kept pushing. When a blind ice hockey tournament in San Jose coincided with his family being in the area, Blake finally relented and gave it a try.

He hasn’t stopped playing since.

Today, Blake is a member of the U.S. blind ice hockey team, balancing training with his studies as a second-year business administration student at Cal State San Marcos.

“Everybody has their own story and everybody’s going through something,” Blake said. “There’s often a lot we can’t see that’s going on with someone.”

Blake began having trouble with his vision during the summer before his junior year of high school. He noticed some minor blurriness in his right eye, but nothing he considered alarming. He wasn’t even sure a trip to the doctor was necessary.

“You think you’re overthinking it by going to the doctor,” Blake said, “but then it turns out to be something.”

Doctors first thought it was a temporary issue, perhaps related to an illness. But follow-up testing revealed Leber’s Hereditary Optic Neuropathy, a rare condition that typically begins in a person’s teens or twenties. As in Blake’s case, it can begin with blurry or cloudy vision in one eye, with vision loss occurring in the other eye within a few months.

By his senior year of high school, Blake had lost his central vision in both eyes.

“It’s like a big, super-fuzzy blind spot right in the middle,” he said.

Though Blake is legally blind, he still has some peripheral vision. He doesn’t require a cane to get around, and someone meeting him for the first time might not immediately realize that he is blind.

Normal visual acuity – the clarity or sharpness of vision – is 20/20. Blake’s visual acuity is 20/800, which means he must be as close as 20 feet to see what a person with normal vision can see at 800 feet. While he recognizes the voices of people he knows, not being able to see facial expressions or other visual cues can make social settings a challenge.

But some of the biggest challenges have come in the classroom. Though Blake has always excelled in his studies, he thought his vision loss would negatively impact his ability as a student. With the support of his family and staff members at San Marcos High, Blake quickly learned that his visual impairment didn’t mean his grades had to suffer. He needed to make significant adjustments in how he learns – from taking advantage of available technology to having people read him test questions – but his grades never slipped.

When it came time to take his Advanced Placement test in calculus, Blake had just one request: He wanted the test reader to have some calculus knowledge. It didn’t happen.

“It’s such a hard thing to read out loud to someone,” Blake said. “The person didn’t know math at all.”

Blake passed despite having a math neophyte trying to read him the problems. He passed several other AP tests and graduated from San Marcos High with a grade-point average over 4.0. 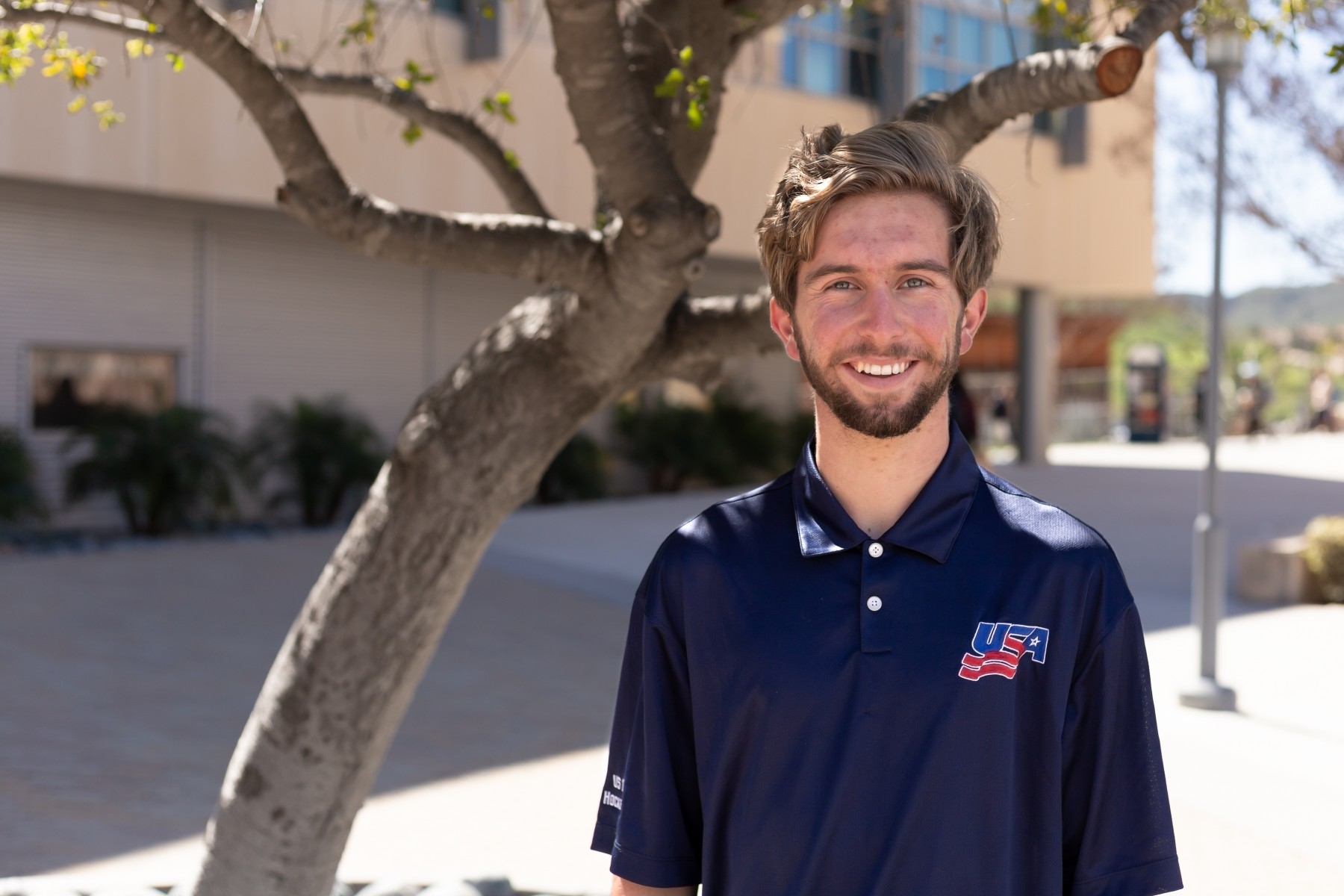 Attending CSUSM after high school was an easy choice. Blake knew staying close to home would provide a strong support system from his family – and there was the added benefit of being part of PACE Promise, a partnership between San Marcos Unified School District and CSUSM that provides a $1,000 scholarship each year for up to four years for students who meet academic benchmarks.

“When you have vision loss, or any disability, one of the biggest goals is independence,” Blake said. “To be able to find a way to pay for my college tuition on my own means one less burden to deal with. I’m so blessed to have that support as well as seeing so many other disabled athletes who are part of it and all that they do. It’s more than a scholarship. It’s an encouraging community.”

Blake has found a similar community at CSUSM. Blake got in touch with John Segoria, CSUSM’s director of Disability Support Services, even before he enrolled at the university. Segoria helped Blake navigate the resources available at CSUSM, ensuring that he was prepared from day one on campus.

“Blake impressed me straight away with his level of enthusiasm to start classes at CSUSM and to live his life to the fullest regardless of being newly blind,” Segoria said. “Blake has done very well academically and is becoming an active member of our on-campus student community.”

Segoria also is quite familiar with Blake’s athletic exploits, having watched him on the ice and the mountain bike trails.

Blake was just starting to develop a passion for mountain biking when he lost his vision, and he was determined not to let it stop him from pursuing the sport. He knew the trails near his house so well that he even tried biking on his own soon after his vision loss occurred. But it was an experiment that didn’t last long. Blake was speeding along one of his regular paths when he struck a rock where he didn’t expect one. He flew over the handlebars and sustained a concussion. Now he traverses the trails with a guide riding in front of him to assist with potential hazards.

Communication is crucial, whether it’s on a mountain bike trail or the ice.

Blake quickly adapted to the changes in blind ice hockey, including the use of a larger puck that makes noise.

It has been a whirlwind year being part of the U.S. blind ice hockey team. It was just a year ago that Blake tried out, followed by a training camp in July and the sport’s first international competition last October. Later this month, Blake will travel to Toronto to compete in the seventh annual Canadian National Blind Hockey Tournament.

Blake is hoping the sport will expand to other countries and become a Paralympic sport by 2026.

“If you told me last year that all this would be happening, I would have said you’re crazy,” he said. “Growing up, anyone who’s played a sport, I would hope that’s their dream – to put on a USA jersey. I was never the person where that was a tangible thing, but you still look up to that as a goal.

“Then it’s funny when life takes a turn. You think the sport you love got taken away, but in a way it turned for the better and now you’re wearing your country’s letters. It’s a pretty cool feeling.”