Rising Out of the Chaos 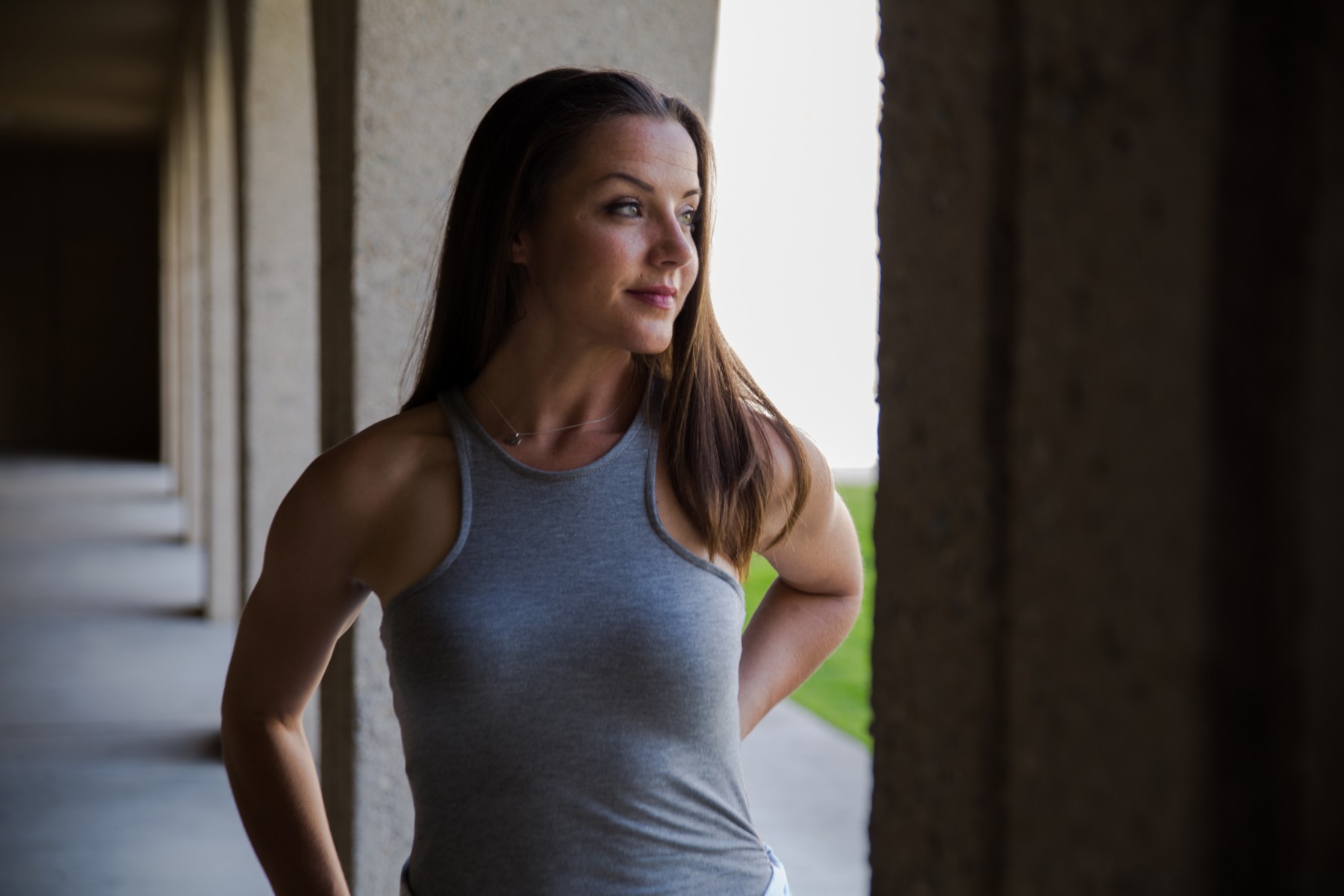 Brittany Masterson remembers the exact moment she decided to leave.

It wasn’t after the black eye.

It wasn’t after being kicked in the head.

It wasn’t after finding a scarf to hide the bruises on her neck.

It wasn’t even one of the terrifying moments.

Brittany was simply sitting on her bed about this time last year doing homework for her classes at Cal State San Marcos when her husband entered the room laughing. She doesn’t recall the conversation. She just remembers looking at him and thinking, “I will never have the life I want or be the person I want to be with this person. He will never let that happen.”

She didn’t know how she would support herself. She didn’t even know where she would live. She just knew she had to leave.

“I thought he might kill me for leaving,” Brittany said. “But I felt like I knew he would kill me if I stayed. I told myself, ‘You have to make a choice.’ And I did. I’d rather die trying to have my own life and hope it doesn’t happen than stay and face what felt inevitable.” 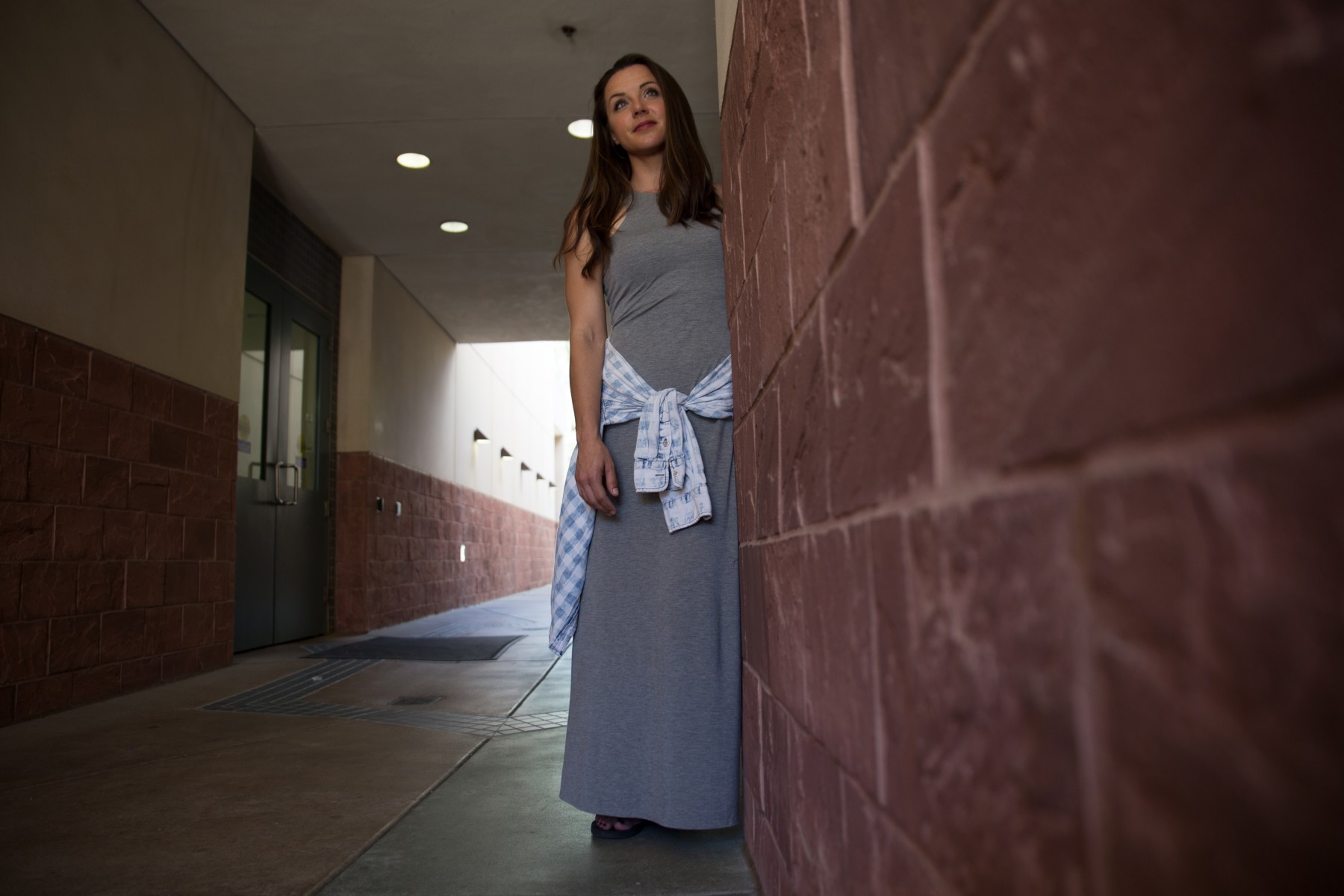 ‘I came from chaos’

Brittany’s childhood was filled with constant eruptions and divisions as her parents’ tumultuous marriage finally ended after prolonged and difficult divorce proceedings. Her brother and sister stayed with her father in Southern California while Brittany moved with her mother to Virginia.

“I always tell my sister, ‘We had everything we wanted and nothing we needed,’ ” Brittany said.

Brittany went to college after high school, but her life went through more upheaval when she received the call that her mother had committed suicide. Though she took a semester off before returning to school, that first semester back proved too much to handle. School soon became an afterthought and she dropped out.

A couple of years later, she met her husband, and they married when she was 25.

“I was so broken at the time,” said Brittany, 32. “Growing up, I never really had stable relationships. I didn’t know what that looked like. I came from chaos, and the chaos of my marriage just felt like childhood. The chaos was normal. You have the logical part of you that says, ‘This isn’t normal.’ But the emotional part is saying, ‘But don’t you kind of deserve this?’ I had no purpose at that time in my life.”

Brittany’s husband constantly degraded her intellect and ambitions as she pursued her degree. More than once, he broke her laptop, leaving her scrambling to find the cheapest replacement possible at Walmart so she could complete her classwork.

The last time he broke one of her laptops she had no backup for the paper she had been working on, forcing her to rewrite dozens of pages within 48 hours to meet her deadline.

“In retrospect, I probably could have emailed my professor and explained what was going on and had an extension,” she said, “but I was so embarrassed and I didn’t want that perception. I didn’t want to be judged on anything other than the work I was producing.”

Brittany recalls a piece she wrote last year about her mother for a class being taught by Robin Keehn, a lecturer for literature and writing studies. Keehn wrote a note not just praising Brittany for her intelligence and talent, but also noted how she had met few people with as much heart.

“At a time when I had zero self-worth, to come to a class with instructors who you admire and have them praise the things you write or the way you’re analyzing something or how you’re doing something, it made me start to realize, ‘OK, you’re not dumb, you’re not worthless,’ ” she said. “It was the foundation for beginning to change the way I spoke to myself.” 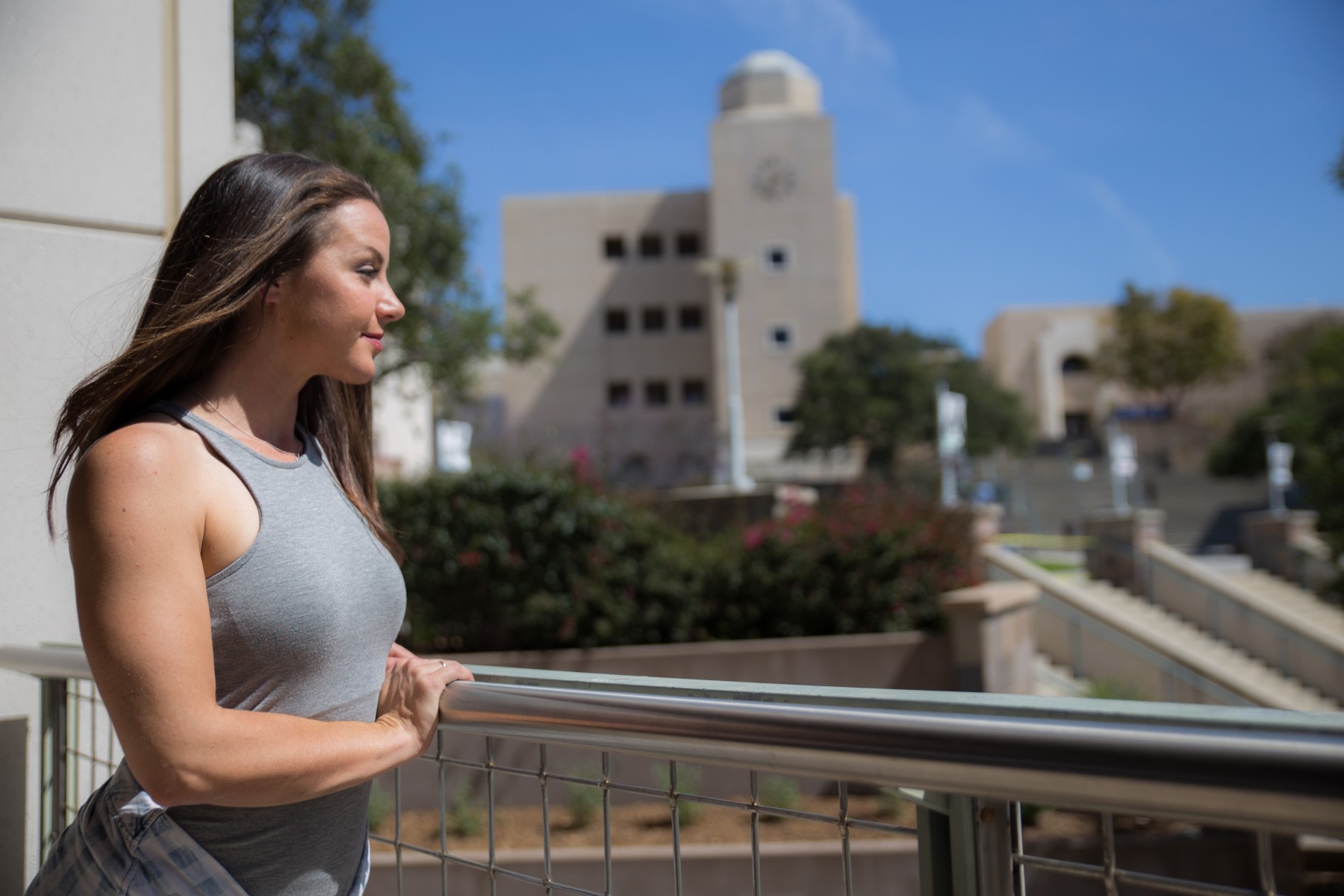 ‘I was really blessed’

Brittany had temporary escapes throughout her marriage, times when she would stay with her dad for a night or find a motel room. But she always kept secret from family and friends the domestic violence.

It was that day last year, sitting on her bed doing homework, when Brittany made the decision to leave for good. She took one suitcase and her schoolbooks.

It was a couple of weeks before the end of the 2017 spring semester and she needed a place to set temporary roots so she could focus on her finals.

Without a car, she found a hotel in Escondido that was within walking distance of a Sprinter station so she could get to CSUSM. It required a two-mile walk, and once a week it meant making the trek from the station to the hotel in the dark following a night class.

But she persevered and successfully completed her finals. With the semester complete, she focused on finding a permanent home. She found a room to rent in Oceanside and got a job working full time as a waitress to cover her living expenses while relying on student loans to pay for school.

Despite the difficulties of the past year, from the fear to the court dates, Brittany has tried to focus on the feeling of freedom.

In a few weeks, she will cross CSUSM’s commencement stage. She will shake the hand of President Karen Haynes and accept her diploma, a bachelor's in literature and writing studies.

It will be an emotional moment, marking the end of one chapter before she continues her education at law school in the fall.

“Education is one of the few relationships I’ve had in my life that was reciprocal,” said Brittany, who counts Berkeley, UCLA and USD among her possibilities for law school. “I always feel like with education you get what you’re willing to work hard for. That didn’t always play out in personal relationships for me. I think that’s why I clung so hard to this. The harder I worked at this the more it rewarded me. It has been a very reciprocal relationship.”

Initially, Brittany thought about pursuing a career in corporate law knowing it would provide the financial freedom she lacked for so long. But given time to reflect on her journey, she is drawn toward following what has become a passion -- helping other victims of domestic violence.

“I left expecting to be alone in the process,” Brittany said. “I was really surprised that I had family and friends who came forward to be supportive. I was really blessed in that way, which is part of why I want to do so much with advocacy.

“How do you leave if you have three, four kids and no income and no skills and no therapy and no anything? It goes beyond emergency shelters. People return because they’re scared. You get so emotionally and mentally beat up that you don’t know what to do. You don’t know what your next step is and you end up going back to what you know.” 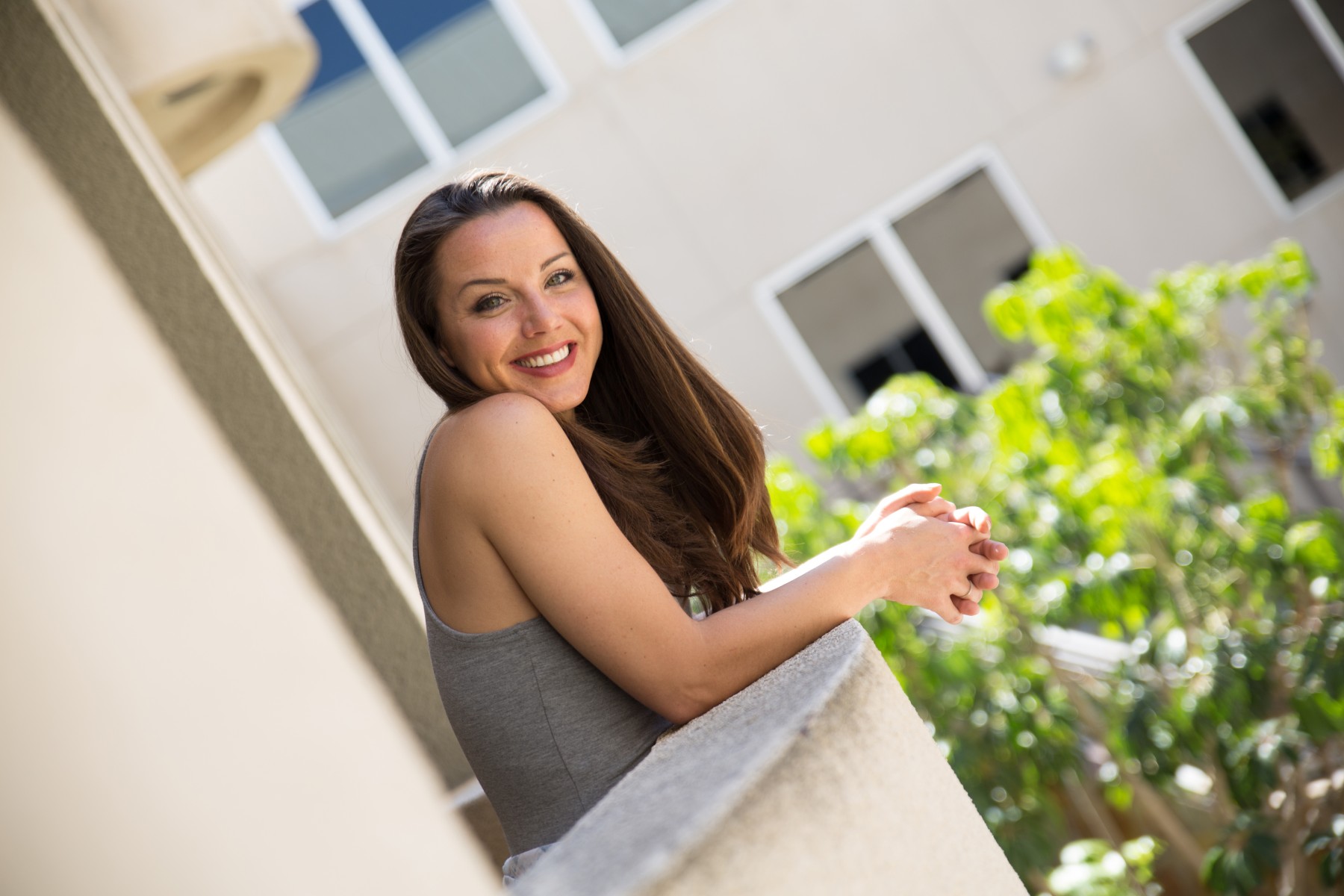 ‘A glimmer of happiness’

Brittany recently wrote a piece about graduating. Her first draft included many of the themes one might expect.

The inevitable failures and successes in life.

The perseverance needed to graduate.

The tools college provides to thrive in the working world.

But before she submitted it, she changed her mind. Not about sharing it -- about what she had written.

Her new draft was more personal. She talked about leaving her husband. About having nothing. About feeling like nothing. She wrote about the note Keehn wrote on her paper and how it helped change her life.

It didn’t matter to Brittany how many people heard the words she had written. It was just important for her to share her story.

“I read my dad the speech I wrote and he cried,” she said. “My dad never cries, and he cried. Everybody has their own story of adversity that they’ve overcome. I’m just really happy to be here.

“I’m going to be really sad to leave San Marcos. I’ve enjoyed being here so much. In times when there was no happiness, this place offered a glimmer of happiness for me. I’ve had a lot of blessings. I’m sure when I look back on this period, I’ll see it as part of my growth and putting me on the path to where I’m going to go in life.”

Rising Out of the Chaos