Building an Athletics Legacy for the Region 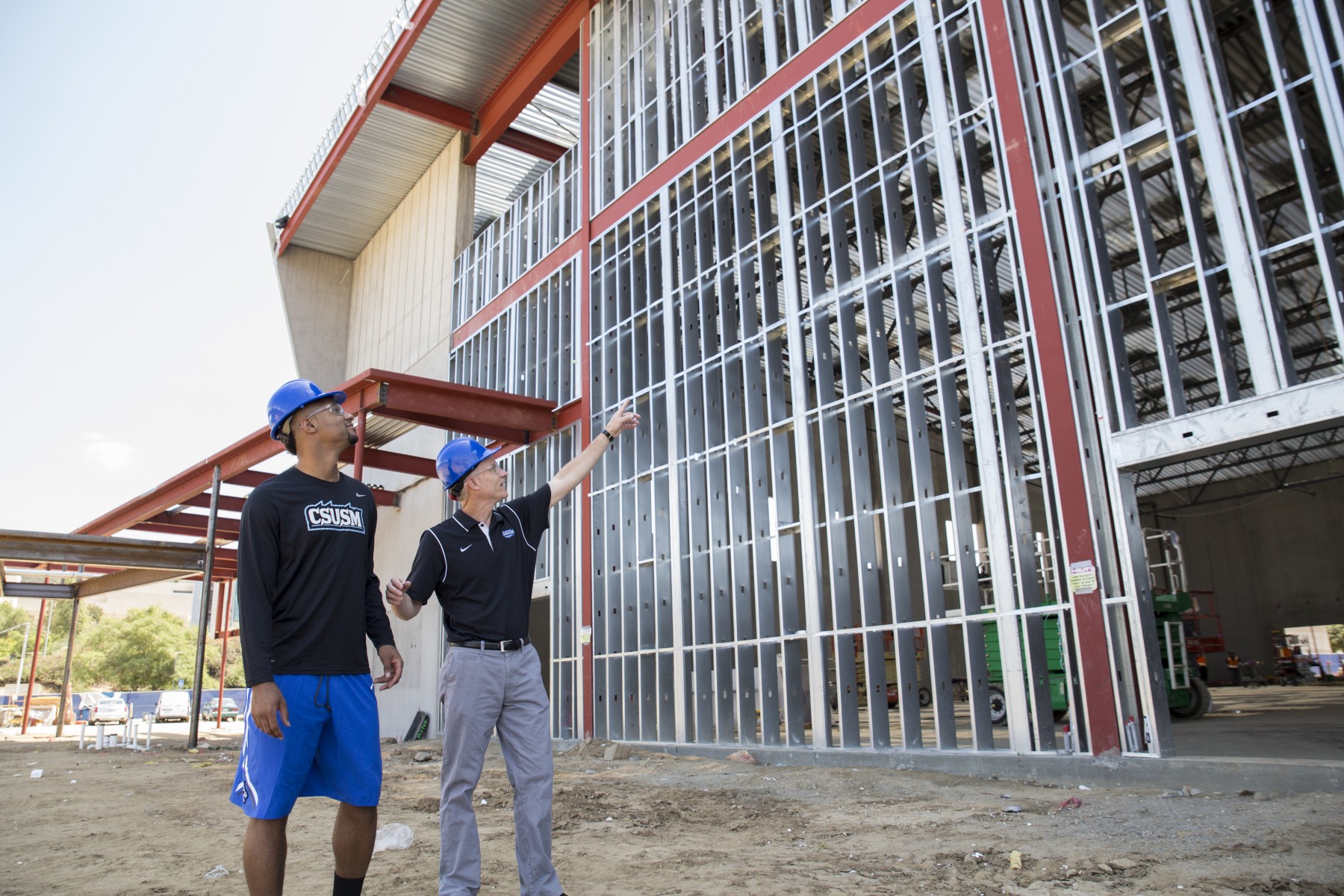 Jim Saia never planned on becoming the basketball coach at Cal State San Marcos. The longtime hoops tactician was leading a successful Fresno Pacific University squad—where he compiled a 70-29 record over three seasons—and was moonlighting in the summer of 2010 as a consultant with the Los Angeles Sparks of the WNBA when his life suddenly took a turn.

“I got a call from the athletic director at Cal State San Marcos while I was driving from Fresno to Los Angeles,” Saia recalled. “I had never heard of Cal State San Marcos before, but I drove down, took a look around and thought, `Wow, this is a great school with great people, and it would be great to start a program from the ground up.’”

Indeed, when Saia arrived in 2010 Cal State San Marcos didn’t even have a basketball program.

He has since built a powerhouse. The Cougars have won 30 or more games in back-to-back seasons, were voted No. 1 in National Association of Intercollegiate (NAIA) rankings 11 times and have made three consecutive trips to the NAIA National Championships tournament.

“He started from nothing and went out and found athletic players who were fun to watch,” said San Diego Union-Tribune sportswriter John Maffei. “He has really brought a lot to the university.”

Now Saia and the Cougars are taking the next step in their journey: the University this fall competes in its inaugural season at the NCAA Division II level. That comes after CSUSM earlier this year broke ground on a state-of-the-art, on-campus arena that will allow the Cougars to play its home games at home. Until now, `home’ games were played at MiraCosta College gym in Oceanside. 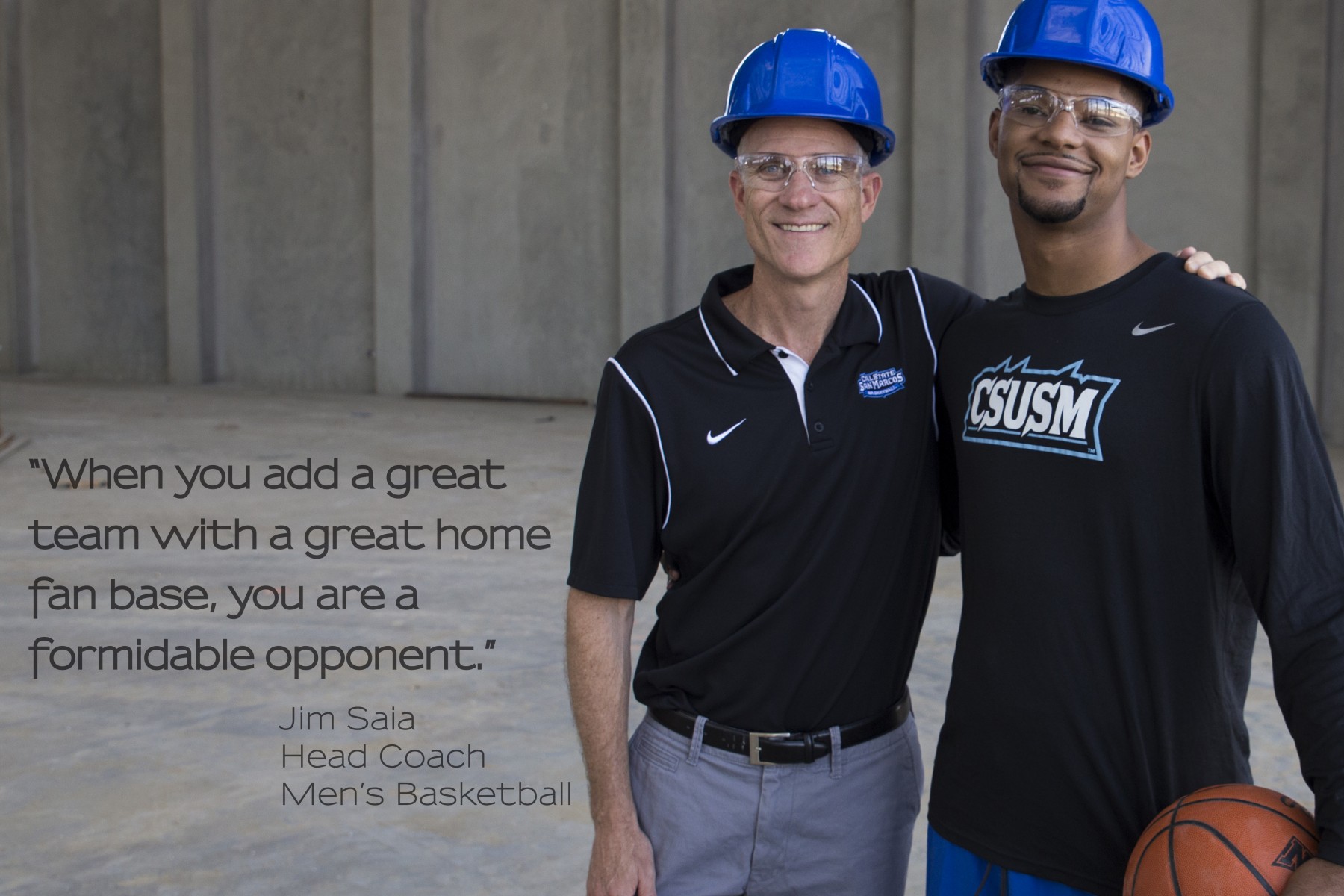 “The new Sports Center is going to be a rallying point for the region,” said Saia. “Having supportive fans in the stands allow our student athletes to perform at their maximum potential. When you add a great team with a great home fan base, you are a formidable opponent.”

The competition will be tougher at the NCAA level, the Cadillac of college hoops. What’s more, CSUSM's new conference, the California Collegiate Athletic Association (CCAA), is the premier league in NCAA Division II. Its teams have combined for 153 Division II national championships—the most of any conference in the country. But CSUSM is ready to represent.

“It’s exciting to be a part of the NCAA and the CCAA conference,” Saia said. “It’s an excellent conference with excellent coaches, so it will be a challenge. The schedule from top to bottom is pretty tough. But basketball is basketball no matter if it’s NCAA Division I or NAIA. The fundamentals don’t change. You’re helping to mentor and develop student athletes so they can get a degree and be successful in life. As for the game itself, if you don’t execute, you’re not going to be successful.”

Saia has found success everywhere he’s gone. As the starting point guard at Sir Francis Drake High School in Marin County, Saia helped lead his team to capture two California state championships during his junior and senior seasons in 1981 and 1982.

A talented recruiter and an offensive mastermind, Saia came to CSUSM with 14 years of coaching experience on the NCAA Division I level, including a seven-year tenure as the top assistant coach at UCLA and one year at USC. Saia has helped more than 15 players onto rosters of NBA teams, including Baron Davis, Earl Watson, Jason Kapono, Nick Young and Matt Barnes. He also has coached at UC Berkeley, Indiana State, Fresno State and Columbia College, in addition to Fresno Pacific.

Saia’s first year at CSUSM was spent establishing the new basketball program. He attracted a crop of NCAA Division I and junior college standouts to join him at San Marcos, and immediately scheduled exhibitions against NCAA Division I programs. The first game the new Cougars played was an exhibition against a San Diego State University team coming off a Sweet 16 appearance. At a nearly sold-out Viejas Arena in San Diego, Saia’s squad made a run every time SDSU started to pull away.

“It was like the movie Butch Cassidy and the Sundance Kid where Butch and Sundance keep looking back at this posse that’s chasing them and asking, `Who are those guys?’” Saia said. “That’s what the SDSU folks were saying.”

Today, the Cougars are on the map. And so is the CSUSM Athletics Department, which is now raising funds for student-athlete scholarships, athlete services and The Sports Center. Together, these initiatives are part of the growing momentum for creating a stronger community not only at Cal State San Marcos but beyond.

“Over the program’s history, generous students and donors have helped us transform dirt lots into athletic fields, enabling lifelong lessons in teamwork, persistence and leadership,” said Director of Athletics Jennifer Milo. “With campaign support, we can further enhance playing and practice facilities, grow scholarships and provide our student-athletes with an even greater experience so that they can be the best that they can be. In doing so, we also create a powerful source of Cougar pride.”

And as for Saia, he is as excited about the future as he’s ever been.

“We envision this program to grow into a top contender on the NCAA Division II level.”

To learn more about Forward Together: The Campaign for California State University San Marcos and how you can help build great communities through athletics or other initiatives, visit: www.csusm.edu/forwardtogether

Building an Athletics Legacy for the Region