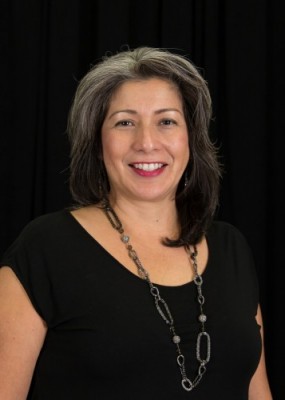 Patricia Prado-Olmos, a respected professor and director of the Alliance to Accelerate Excellence in Education at California State University San Marcos (CSUSM), has been named the University’s new Vice President of Community Engagement. Prado-Olmos assumed the position on January 5 upon the retirement of Jan Jackson, the division’s founding vice president.

“Dr. Prado-Olmos has a keen grasp of the importance of community/university partnerships toward the goal of achieving mutually beneficial outcomes, and a demonstrated track record of building and leveraging these partnerships for both institutional and public good,” said CSUSM President Karen Haynes. “This, combined with her academic background, positions her to help advance CSUSM's community engagement initiative in the areas of general community outreach, student service learning and civic engagement and the rapidly growing area of engagement scholarship.”

Prado-Olmos joined the CSUSM campus in 1997 as an assistant professor of education, earning tenure in 2001 as an associate professor, and achieving the rank of professor in 2007. Concurrently, she has held a number of administrative positions at the University, beginning with the role of academic director for CSUSM programs in Southwest Riverside County from 2005 to 2008. She served as associate dean for the College of Education (CoE) from 2008 to 2010 and again from 2011 to 2012 under its new structure as the College of Education, Health and Human Services (CEHHS). In 2010, she led the CoE as its interim dean, overseeing its initial realignment as CEHHS under the University's college restructuring initiative. And, since July 2013, Dr. Prado-Olmos has served as the founding director of the Alliance to Accelerate Excellence in Education in the Division of Community Engagement, the administrative home for CSUSM’s guaranteed admission program with 10 area school districts.

“I am excited to lead the Division of Community Engagement, which provides a holistic and systemic approach to community engagement unlike any other in the California State University system,” said Prado-Olmos. “Working across divisions and departments at CSUSM, I look forward to continuing the important work of institutionalizing community engagement and instilling it into the fabric of who we are–a way of being—that guides our work to prepare tomorrow’s leaders, build better communities and solve critical issues.”