CSUSM in the Headlines: Fall 2015 Review

By The CSUSM News Team 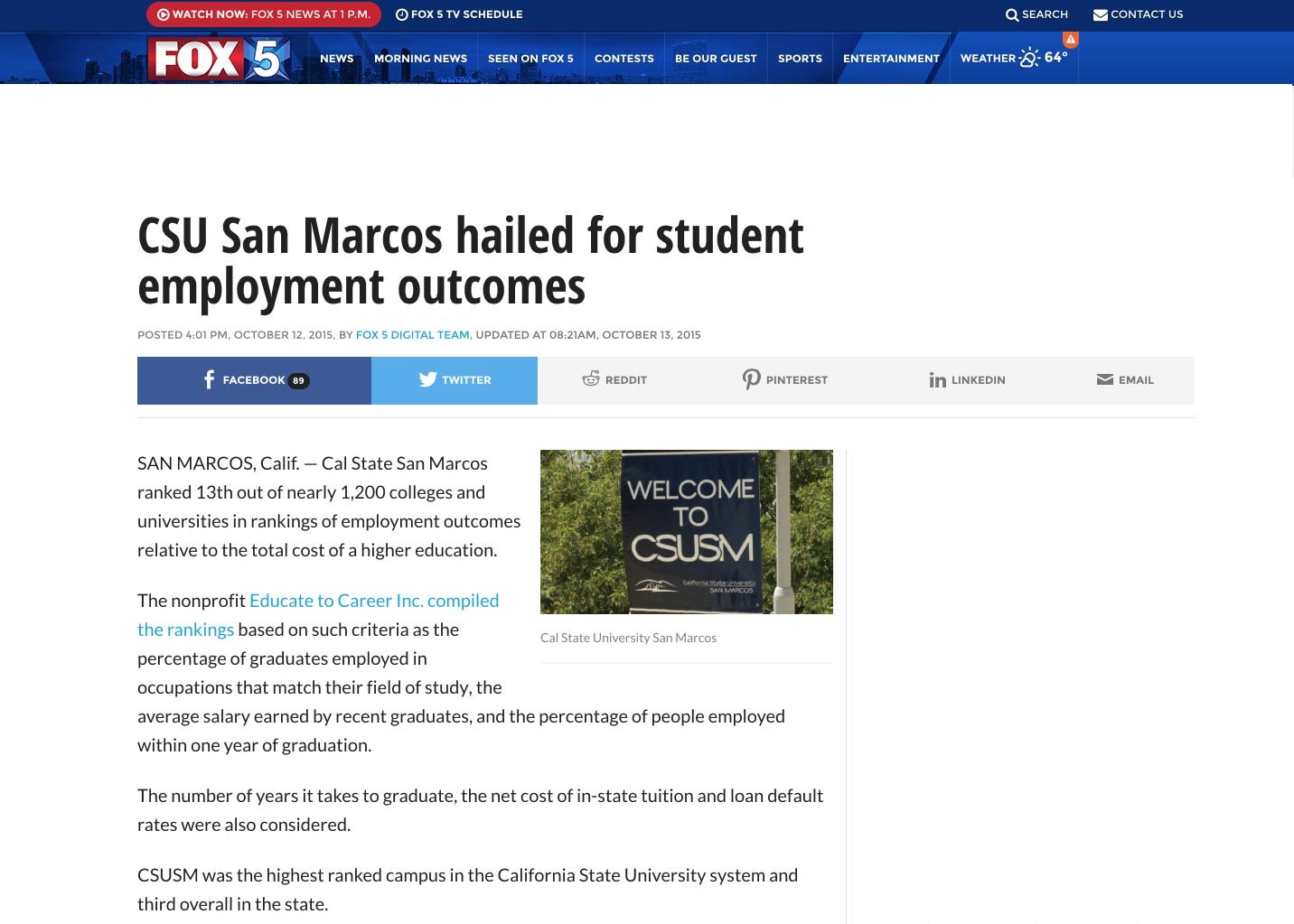 The MBA International Airport Study received a lot of attention from several media outlets including KPBS, The San Diego Union-Tribune, KUSI-San Diego, San Diego Reader and Our City San Diego. The research that was done in three phases over the past three years suggests that the most feasible location for a new international airport would be on Marine Corps Base Camp Pendleton.

The Encinitas Advocate spoke with Professor Jeff Charles, who played a major role in a new San Dieguito Heritage Museum exhibit that focuses on the history of the Ecke Ranch and its role in making the poinsettia plant a top-selling Christmas plant around the world.

Psychologists study behavior and the brain

Professor Wesley Schultz was interviewed by Student Science as part of a series on careers in science technology, engineering and mathematics. In the article Schultz spoke about his research on recycling and how social norms have a powerful influence on human behavior.

Several organizations that annually rate colleges on programs to recruit and retain veterans and military spouses released their lists in November. The Times of San Diego and KPBS both reported that CSUSM was designated.

When NBC San Diego found out students were using the charred remains of the Coco Fire as a learning lab, they turned to professor George Vourlitis for comments. Vourlitis and his biology students were eager to take the classroom outdoors for a one-of-kind learning experience where they began cataloging plant species and comparing slopes with weather elements and how they may effect plants’ growth.

According to a recent survey, California State University San Marcos ranked 13th out of nearly 1,200 colleges and universities in employment outcomes relative to total cost of a higher education. CSUSM was the highest ranked campus in the California State University system and third overall in the state. Several news outlets, Fox 5 San Diego, ABC 10 News San Diego and the Times of San Diego, reported about the success.

Social Justice is a Lifelong Journey

President Karen Haynes and Assemblywoman Shirley Weber addressed several hundred students, faculty and staff concerning issues of equality and social justice during the CSUSM Office of Diversity’s All People’s Luncheon. The Coast News Group and The San Diego Union-Tribune highlighted their speeches and the University’s commitment to diversity.

In a Huffington Post blog, President Karen Haynes discusses CSUSM’s commitment to serving at-risk students including former foster youth, veterans and minorities. She says that by educating underrepresented students from our region who want nothing more than a chance to pursue their dreams, CSUSM is transforming lives, bettering families, powering the regional economy and strengthening our communities for a more hopeful future.

The San Diego Union Tribune covered the public launch of CSUSM’s first comprehensive fundraising campaign, Forward Together. The article, which highlights campaign fundraising priorities and lead donors, notes that the University has raised $26 million and is over halfway to its $50 million goal.

CSUSM in the Headlines: Fall 2015 Review