CSUSM In the Headlines: September 2015 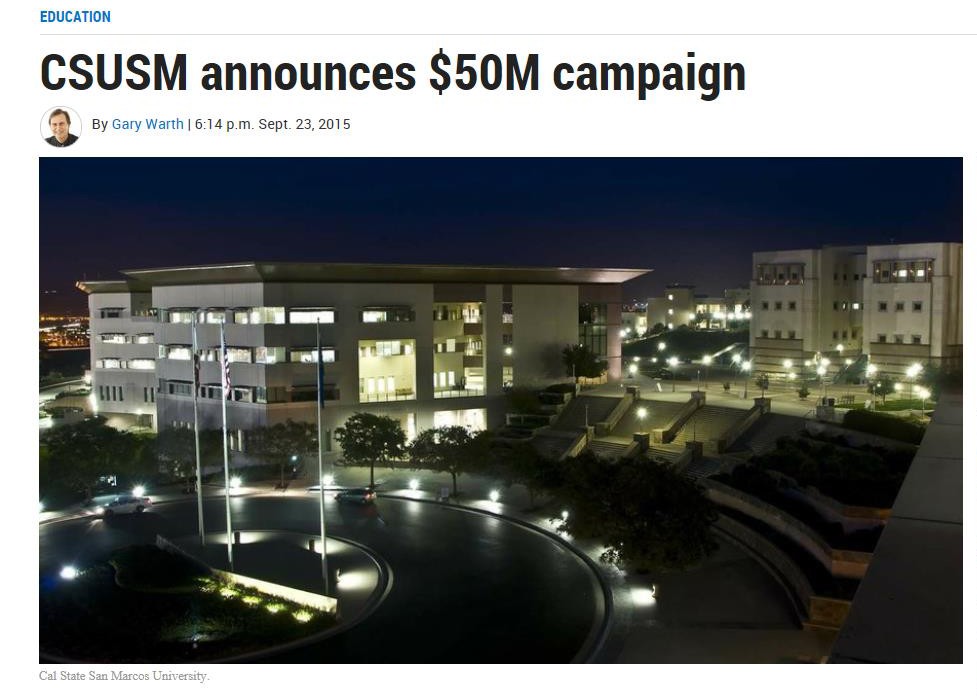 In a new Huffington Post blog, President Karen Haynes discusses CSUSM’s commitment to serving at-risk students including former foster youth, veterans and minorities. She says that by educating underrepresented students from our region who want nothing more than a chance to pursue their dreams, CSUSM is transforming lives, bettering families, powering the regional economy and strengthening our communities for a more hopeful future.

The San Diego Union Tribune covered the public launch of CSUSM’s first comprehensive fundraising campaign, Forward Together. The article, which highlights campaign fundraising priorities and lead donors, notes that the University has raised $26 million and is over halfway to its $50 million goal.

History Professor Alyssa Goldstein Sepinwall wrote an article for Forward.com about how actor Gregory Peck passionately opposed racial prejudice and bigotry against both blacks and Jews in Hollywood and beyond. The local-born actor (from La Jolla but went to school in Los Angeles) is perhaps best known for his role as attorney Atticus Finch in To Kill a Mockingbird, but he also played a journalist in Gentleman’s Agreement, who posed as a Jew to research an expose on antisemitism in New York and Connecticut.

If this does turn out to be the Chargers' last season in San Diego, The San Diego Union-Tribune reports that there will be more people there to witness it, judging from ticket sales that are among the NFL's most improved. Sports Marketing Professor Vassilis Dalakas said that the surge in Chargers ticket sales doesn't surprise him.

As part of the pope’s first Mass in the United States last week, Father Junipero Serra, the 18th century founder of California’s system of Catholic missions, was canonized and elevated to sainthood. Joely Proudfit, chair of the Department of American Indians Studies and director of the California Indian Culture and Sovereignty Center, was interviewed by The San Diego Union-Tribune about why the day was not one of celebration for Native Americans.

CSUSM Recognized for Excellence in Diversity

For the second year in a row, CSUSM received the Higher Education Excellence in Diversity (HEED) Award – the only national award honoring U.S. colleges and universities that demonstrate an outstanding commitment to diversity and inclusion. Take a look at the list of 2015 honorees who will be featured in the INSIGHT Into Diversity magazine’s November 2015 issue.

The Top 10 Worst Spokesperson Disasters of All Time (Aside from Jared Fogle).

When Momentology asked branding experts for their top picks for worst spokesperson disasters of all time, Dalakas weighed in on Nike advertising that featured Paralympic champion Oscar Pistorius, who was later found guilty of homicide, as well as Accenture’s partnership with golf icon Tiger Woods, who was exposed as a serial cheater, leading to one of the worst sports scandals in recent history.

Hate Running? Walking for Exercise May be Ideal

Prevention Magazine makes a compelling case for trading jogging for walking and kinesiology professor Todd Astorino says that while short-term training for marathons is fine, chronic training over a long period of time without adequate recovery can lead to injury and illness.

CSUSM In the Headlines: September 2015