By the CSUSM News Team 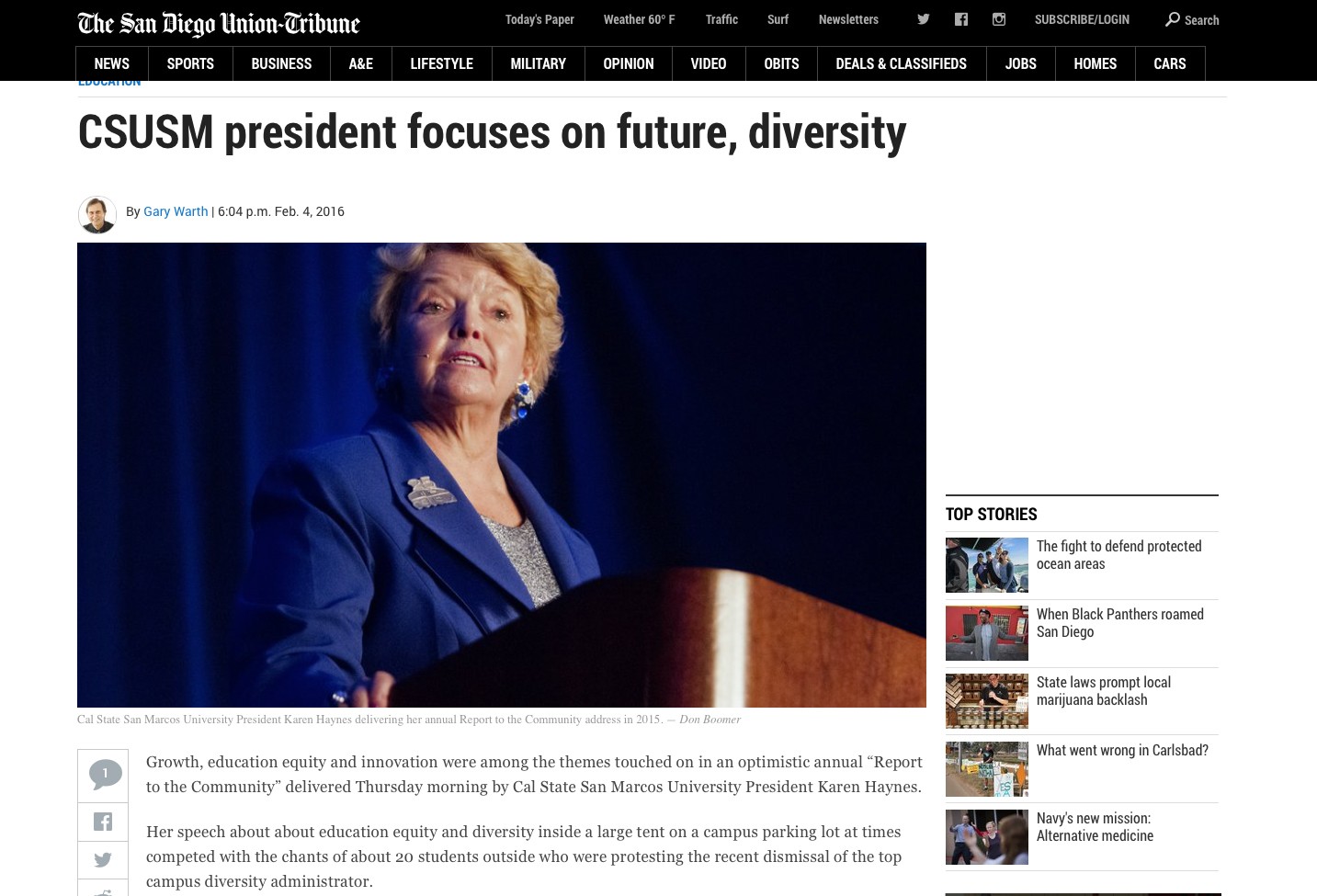 CSUSM in the News

CSUSM President Karen Haynes gave a speech to more than 600 business and community leaders at the 12th annual Report to the Community in February. The Times of San Diego, KPBS and The San Diego Union-Tribune covered topics of her speech including innovation in education, experiential learning and how the University is preparing students for the future economy.

KPBS, the San Diego Metropolitan and The San Diego Union-Tribune highlighted President Barack Obama’s decision to appoint Associate Professor Joely Proudfit to the National Advisory Council on Indian Education. The council will advise the Secretary of Education and Congress on the administration and funding of Alaska Native and American Indian education programs.

Professor Sharon Hamill received the 2015-16 Harry E. Brakebill Distinguished Professor Award for her contributions to the University and her research. This is the highest honor presented at CSUSM. The San Diego Metropolitan reported on the accolades as well as Hamill’s research of the emotional and psychological impacts on teenagers and young adults who find themselves caring for family members afflicted with deadly diseases.

The Times of San Diego highlighted Professor Kristine Diekman, one of four faculty members in the California State University system to receive the Wang Family Excellence Award. Diekman has more than 30 years of experience producing, directing and editing films throughout her career. She received $20,000 for being an honoree of the award.

Kaja Dunn, a theatre lecturer for the School of Arts, was featured in an article that weighed in on the status of companies and plays that explore the black experience. Dunn spoke with The San Diego Union-Tribune about the hunger for more diversity in the type of stories told about the African diaspora, and the need for more young African-Americans with a larger presence among the artistic leadership.

Fox 5 San Diego reported live from campus February 4 and interviewed several faculty members and students. Professor Vassilis Dalakas made an appearance on live TV that morning to discuss the Super Bowl, the San Diego Charges and fan loyalty with the anchors.

CSUSM Latest to use Zipcars

Zipcars pulled into campus last month offering an inexpensive car-sharing alternative to faculty, staff and students. The San Diego Union-Tribune interviewed Deb Schmidt, the commute coordinator for CSUSM, about the benefits of having Zipcars accessibleat the low cost of $7.50 an hour, which includes gas. CSUSM is the X CSU campus to partner with the car sharing company Zipcar.

The Times of San Diego, ABC 10 News and The San Diego Union-Tribune reported on an active shooter drill that took place at CSUSM in early January. Emergency personnel from several agencies in the local area participated in the scenario that provided an authentic training environment. Approximately 100 personnel from campus, local hospitals, police departments and fire departments participated in the scenario, including an acting gunman and numerous victims.

CSUSM University Police Department’s bomb dog K-9 Armor was awarded a bullet- and stab- protective vest from Vested Interest in K9s, Inc. As the only explosive detection K9 in North County, Armor and his handler Police Officer David Angulo are always prepared to respond to calls from the surrounding communities, making the need for a protective vest a necessity.