By The CSUSM News Team 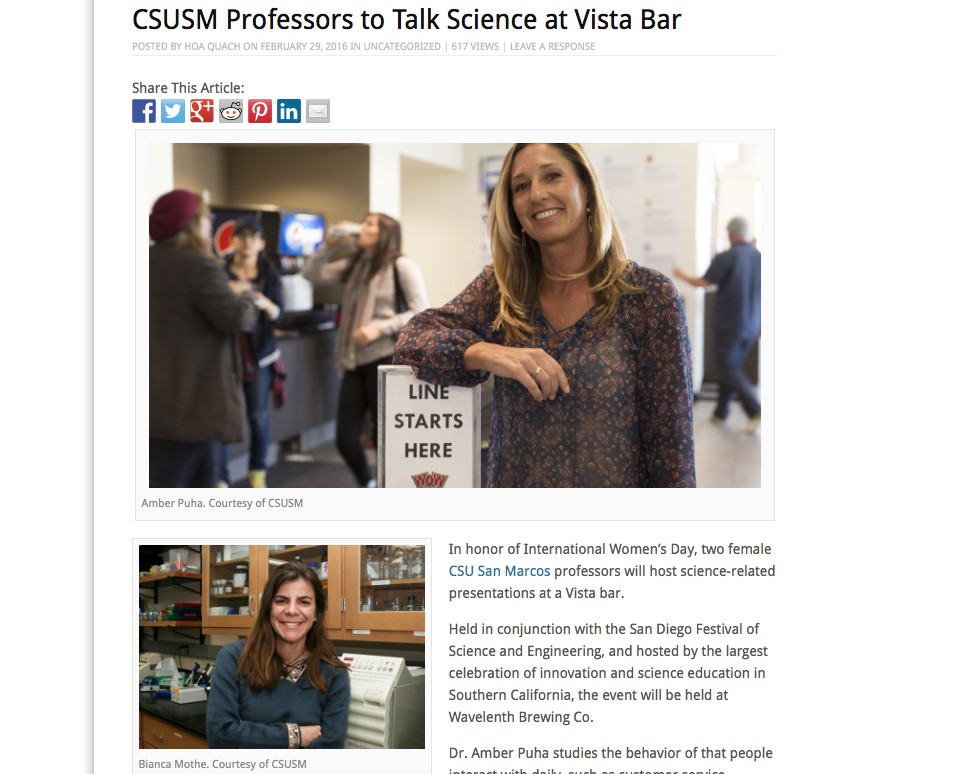 Professors Walk into a Bar
Summary

Popularity of NCAA Brackets a Win for America

The San Diego Union-Tribune published an article by Vassilis Dalakas, professor of marketing, that touches on March Madness and economic gains in the form of gambling on sports. Interestingly enough, March Madness generates approximately 80 percent of the National Collegiate Athletic Association’s annual revenue.

K9 Armor and Police Officer David Angulo of the CSUSM police department made headlines on CBS for receiving a donated ballistic protection vest valued at more than $1,700. The vest was donated by the national nonprofit Vested Interest in K9s, Inc.

The Islamic Monthly looked to Assistant Professor Ibrahim Al-Marashi for an article about the Islamic State of Iraq and Syria (ISIS). This article examines what ISIS is and how that explains what it does, a synthesis that is often missing in both perspectives. According to Al-Marashi, despite its desire to endure, the idea of “ISISism” will eventually lose its appeal.

In honor of International Women’s Day and in conjunction with the San Diego Festival of Science and Engineering, Professors Amber Puha and Bianca Mothe met up at Wavelength Brewing Co. in Vista, Calif. to talk about their research and give presentations. Puha presented her research that specializes in the mathematics of queueing, while Mothe’s presentation focused on vaccine development.

Hispanic immigrants have been rushing to become citizens for the chance to vote in the 2016 presidential elections in fear of Trump winning. When KPBS published an article about the rise of citizenship applications in nearby areas, Arcela Nuñez-Álvarez, director of the National Latino Research Center at CSUSM, commented on the shift of civic engagement among the Hispanic community in San Diego.

A new online International Baccalaureate (IB) Educator Certificate in Teaching and Learning India was announced in mid-March by Robert Carolin, the executive director and associate dean of Global Education for Extended Learning at CSUSM. Candidates completing this program will be prepared to teach in any IB school worldwide, with consideration for local government teacher credentialing.