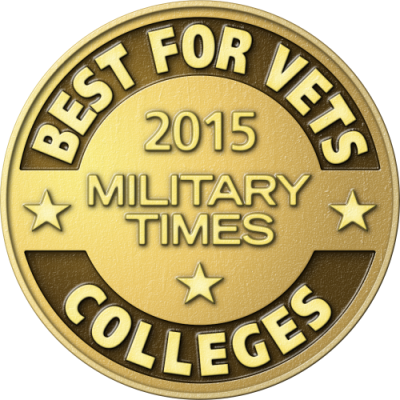 California State University San Marcos (CSUSM) has been named to Military Times’ Best for Vets: Colleges 2015 list. This distinction recognizes and rewards colleges across the nation that demonstrate a commitment to providing educational opportunities to America’s veterans.

CSUSM is ranked 20th, up from 41st last year, out of 100 four-year universities. It is the second-highest rated university in California.

Military Times, the organization comprising Army Times, Navy Times, Air Force Times and Marine Corps Times, evaluated the many factors that make an university a good fit for service members, military veterans and their families. Their detailed survey requires schools to meticulously document a tremendous array of services, special rules, accommodations and financial incentives offered to military and veteran students and to describe many aspects of veteran culture on a campus.

Eleven percent of CSUSM’s student population self-identifies as a veteran, active-duty military personnel, or a dependent—the highest number per capita in the 23-campus California State University system. In September, the University re-opened its Veteran’s Center in a new, 1,000-square-foot building, donated by students and faculty at the Stevens Institute of Technology. The Center offers support in achieving students’ academic and career goals with services tailored to their unique needs.

“Cal State San Marcos is a warm, welcoming place—a place where veterans feel comfortable,” said Veterans Services Director Patricia Reily. Reily, who has 20 years of experience as an active-duty Naval officer, coordinates and develops veteran student programs and outreach at CSUSM, assisting in the University’s efforts to create a seamless transition from military to university life and success.

“We put a lot of emphasis on not only ensuring that our military-affiliated students get a first-class education but that they get the knowledge and experience they need for sustainable careers post-graduation. Higher education is a great way to transition veterans into the next part of their lives—and we do that really well here.”

CSUSM’s veteran-friendly approach to higher education is also supported by such initiatives as the War at Home and Abroad digital history archive project, the Veterans Student Support Fund and veteran specific scholarships.

For more information on CSUSM’s Veterans Center and the services it offers, visit: http://www.csusm.edu/veterans/