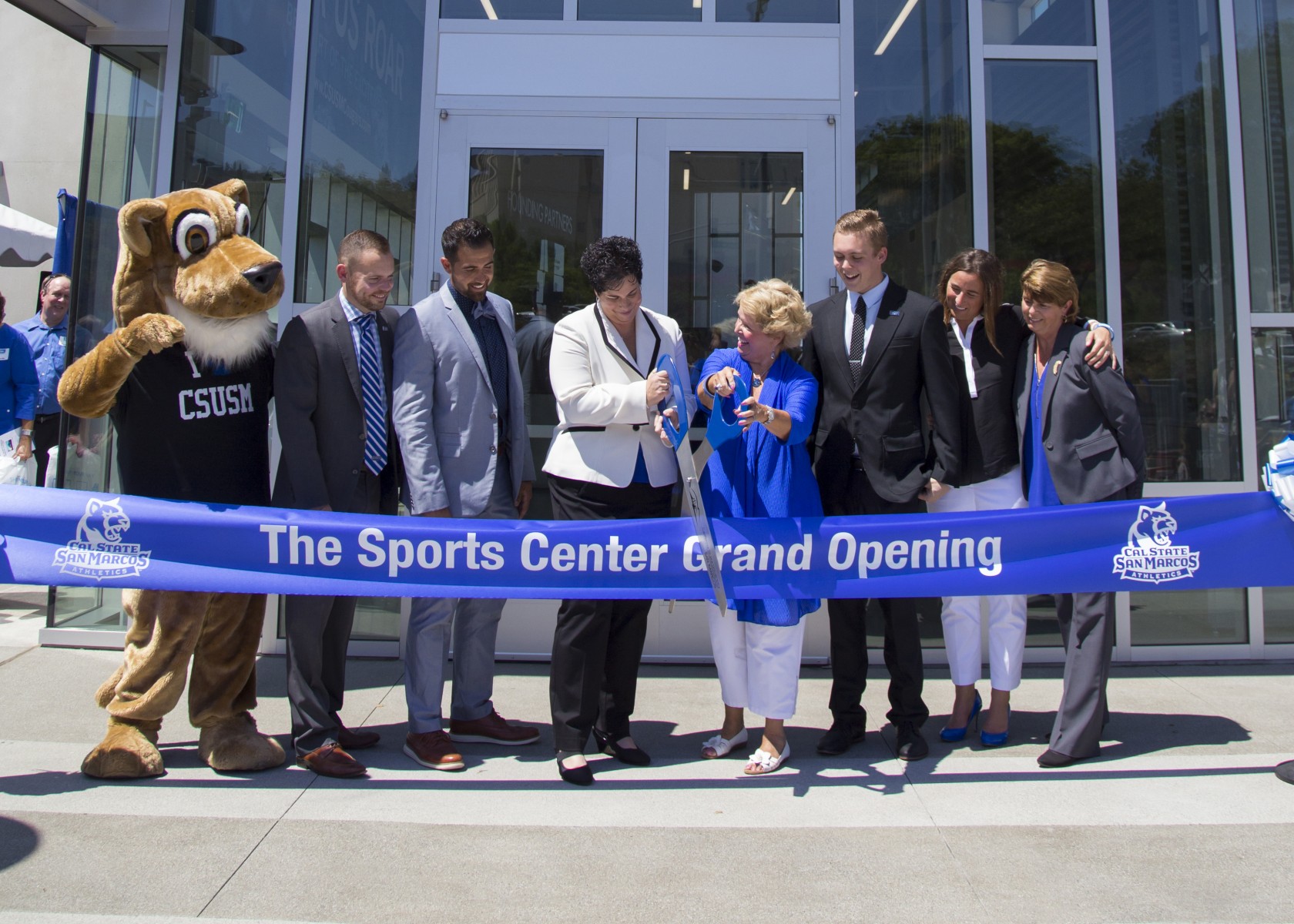 After months of anticipation, Cal State San Marcos campus and community members finally had an opportunity to celebrate the grand opening of the University’s new home for Cougars athletics.

A large crowd gathered outside The Sports Center on Thursday, Sept. 1, for a ribbon cutting to mark the official opening of the $11.4 million facility.

“The physical aspects are certainly impressive, but more than the remarkable aesthetics is that we have created another rallying point of pride for our campus and our community,” Haynes told attendees at the ribbon cutting.

CSUSM women’s volleyball head coach Andrea Leonard noted the importance of interaction among the student-athletes during her remarks at the ribbon cutting.

“The student lounge has been a catalyst for all of the Cougars to merge and connect with one another,” Leonard said. “Winners breed winners and success breeds success. Having our student-athletes together is doing just that. You can feel the energy and cohesiveness bubbling up. The magic is happening inside these walls.”

The opening marks another step forward on CSUSM’s road to NCAA Division II membership. The University learned over the summer that it has been approved to enter its third and final year of transition and anticipates being a full-fledged Division II member by fall 2017.

“I’m a little biased, but I’m confident when I say that we are now the envy of over 300 NCAA Division II institutions,” said Jennifer Milo, CSUSM’s director of athletics.

The Cougars are part of the California Collegiate Athletic Association, which includes 11 other California State Universities and UC San Diego.

When CSUSM applied for NCAA Division II membership in 2014, building athletics facilities suitable for that level became a top priority.

“This facility has truly been our missing link since 2010,” said Milo, noting that is when CSUSM began sponsoring volleyball and basketball.

“It’s obvious that we’re on the road to success,” she added. “Recruits want to be part of this excitement.”

The Sports Center is the newest in a long line of buildings that have been constructed since Haynes arrived in 2004. CSUSM has averaged one new building a year on campus in that time.

Construction of The Sports Center was originally slated to take 18 months, but PCL Construction completed the project well ahead of schedule.

However, Milo noted that the work began long before the first shovel was put into the ground with planning starting from scratch more than a year before the groundbreaking.

“It was a true team approach with a great attention to detail and efficiency to make sure our needs were met and that we were building a building that we could all be proud of,” Milo said. “And that goal is accomplished.”

Haynes said The Sports Center will be more than simply a home for Cougars athletics.

“For our student-athletes, not only is this a beautiful new venue for their games, but it is a place where they will learn valuable lessons about teamwork, perseverance and leadership,” she said. “And those lessons will carry on into their post-graduate lives.”