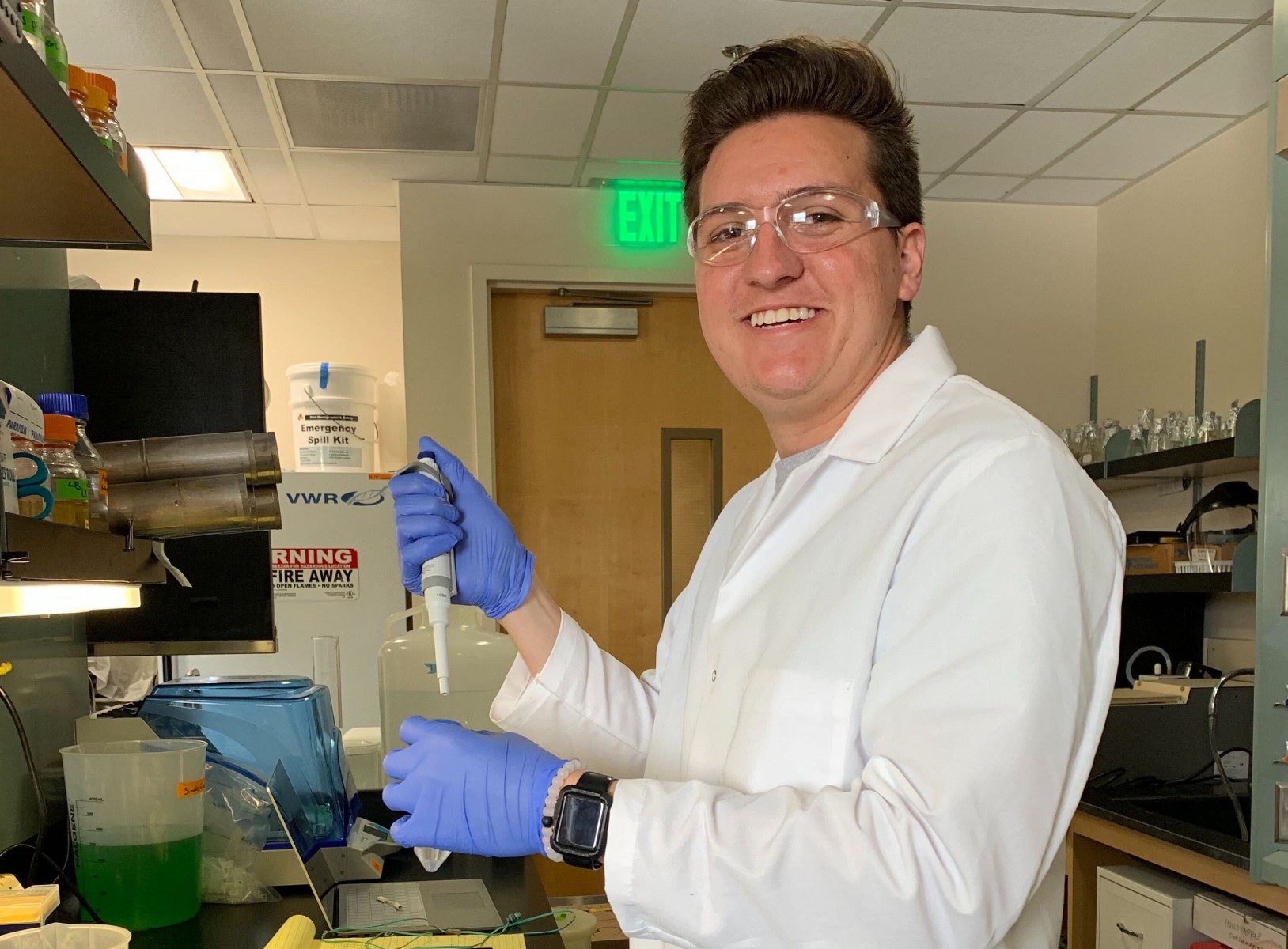 Biology student Dennis Zanesco was awarded the 2020 Community Engaged Scholar by the College of Science, Technology, Engineering and Mathematics (CSTEM).

When Dennis Zanesco was growing up in La Quinta just outside of Palm Springs, his father always preached to him to leave a room better than when he entered.

So he decided to execute that concept on a larger scale, specifically on 306 acres.

Zanesco will graduate this spring from Cal State San Marcos, and in doing so, has left the 306-acre campus significantly better than when he arrived from the desert five years ago.

“If I can improve everything that I come in contact with, just by a little, then I can change the world around me for the better,” Zanesco said. “I continued to live by my father’s guiding words as I entered Cal State San Marcos. I knew I wanted to have an impact on the school, but I didn’t know how to go about accomplishing my goal.”

A biology major, Zanesco has served on campus as a learning assistant, supplemental instruction leader and STEM tutor. He has also spent time as Course Embedded Learning Support (CELS) in biological sciences and is part of the Robert Noyce Teacher Scholarship Program as he plans to become a high school biology teacher.

In January 2019, Zanesco joined Elinne Becket’s lab. There, he helped the assistant professor in bacterial genomics develop the first Coastal Microbial Community Standard. This standard helps with the analysis of bacteria and antibiotic resistant genes that bacteria can acquire due to antibiotics in coastal waters. It not only will aid the Becket research lab and CSUSM, but it also will be shared with other schools in the CSU system to advance the microbiology research community and improve the health of our local coastal waters.

“Not only did Dennis research and execute these methods independently, he trained a team of undergraduates in microbial ecology fieldwork/sampling, sample processing, next-generation sequencing and bioinformatics analyses,” Becket said. “The spectrum of skills he independently and effectively developed is unlike any student I’ve seen. Dennis is by far the most independent, driven and impressive research student I have come across. His excellence in research combined with his dedication and service to the lab and his fellow students is inspiring.”

In addition to Becket’s tutelage, Zanesco gives a lot of credit for his college success to his experience under Paul Jasien. But it wasn’t always easy.

Zanesco refers to the professor of chemistry and biochemistry as one of his mentors, but it wasn’t smooth sailing at the beginning. He earned a C-minus the first time he took Jasien’s course, and that brought his grade-point average to 2.4 after his first two years.

That proved to be a turning point in his academic career. He retook the course, received an A, and went on to notch a 3.7 GPA in his final three years, 3.93 in his upper-division courses.

“Geez, where do I start?” Zanesco said when reflecting on the impact Jasien and Beckett had on his development at CSUSM. “They were really like mother and father figures for me. Dr. Jasien was rather stern with me, making sure I was doing well in all my classes, and Dr. Becket was there for support when I needed it. They showed me the possibilities that I could accomplish, and they believed in me. Once I realized this, all I wanted to do was make them proud, so I set off to make the most of my time at Cal State San Marcos.” 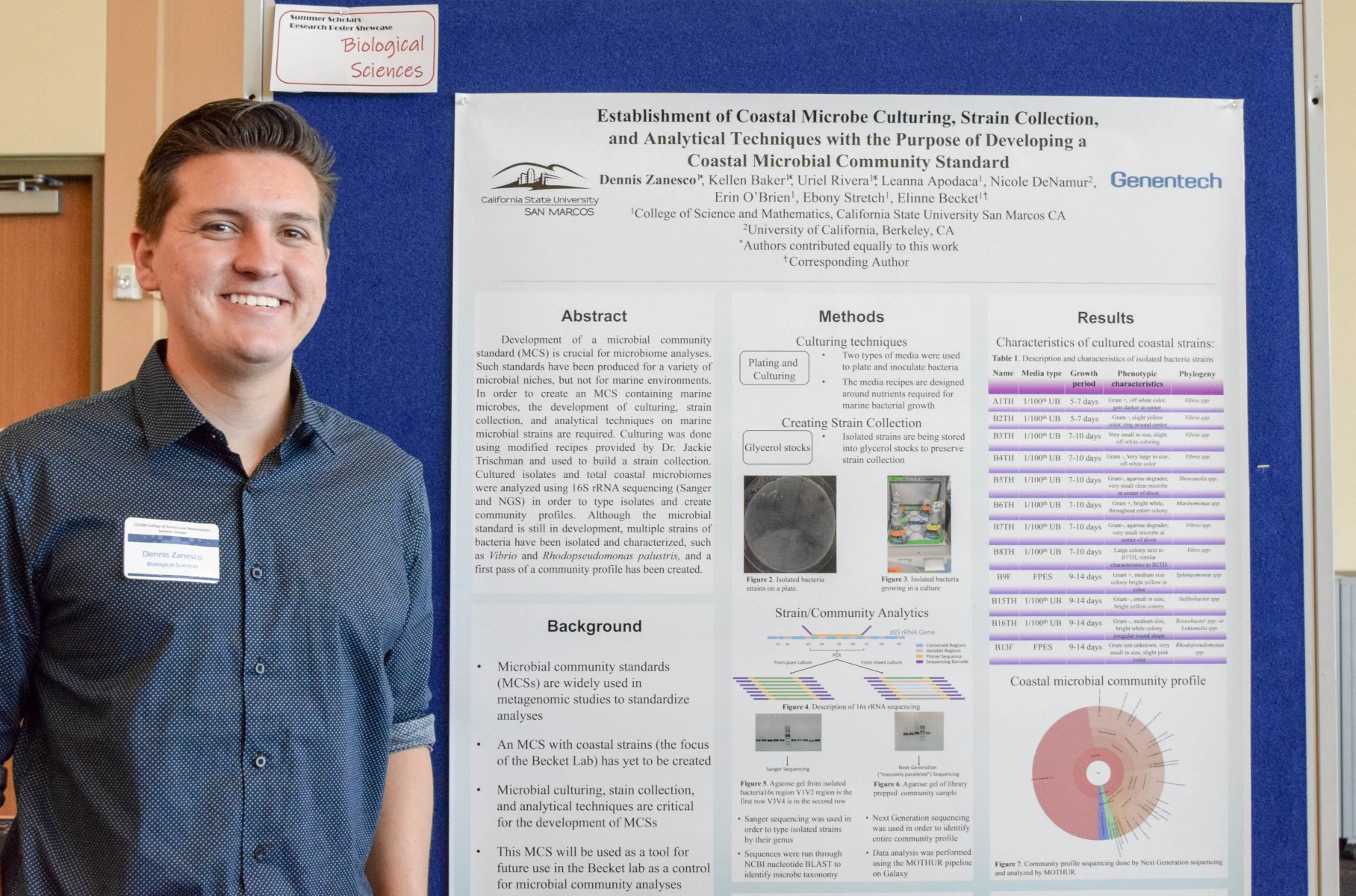 Zanesco will begin CSUSM’s teacher credential program in the fall. As part of the Noyce program, he will commit to teaching at least six years at a Title I (underprivileged) school district. He isn’t sure if he’ll begin his teaching career near home in La Quinta or in his newfound home of San Marcos.

Wherever he decides, he’ll be well-equipped to handle the rigors of the profession.

“Dennis will be an incredibly empathetic and passionate teacher, and already is in the teaching endeavors he's currently involved in,” Becket said. “He has such excitement for everything he and others do, and I think students will feel very comfortable approaching him. Dennis doesn't command leadership. He doesn't have to. He just throws himself into everything he does with excitement, and is always available to help. Dennis always puts in extra hours in the lab, whether it be to work or just hang out and study. And unbeknownst to me, he will show new students the techniques he's working on, and let them test out their lab hands and develop skills and confidence in the lab.

“Also, he has been responsible for collecting samples out in the field, and he will invite other new students along, to train them and for team-building. This is followed by me receiving heartwarming photos of my students out in the field collecting samples, enjoying the beach while doing microbiology field work. There will be an empty hole in the lab when he graduates this spring.”

Helping others isn’t for show. Zanesco doesn’t do it for the recognition or scholarship. His glass-half-full approach to life was developed at a young age, and his desire to work with children fits perfectly with his global outlook on life.

“Well, my parents are probably my biggest inspiration for this,” said Zanesco, whose mom had breast cancer. “I want to find a way to have the most significant impact on the world that I possibly can. Initially, I figured I could do this by getting into cancer research and find the cure for cancer or work for a groundbreaking company in next-generation sequencing. But I found out how much of an influence I had on the students around me while I was tutoring. I figure I can have a greater impact on the world if I can inspire all the students I teach every year to try to do good in the world. Then I can build a network of people that have done great in this world.”