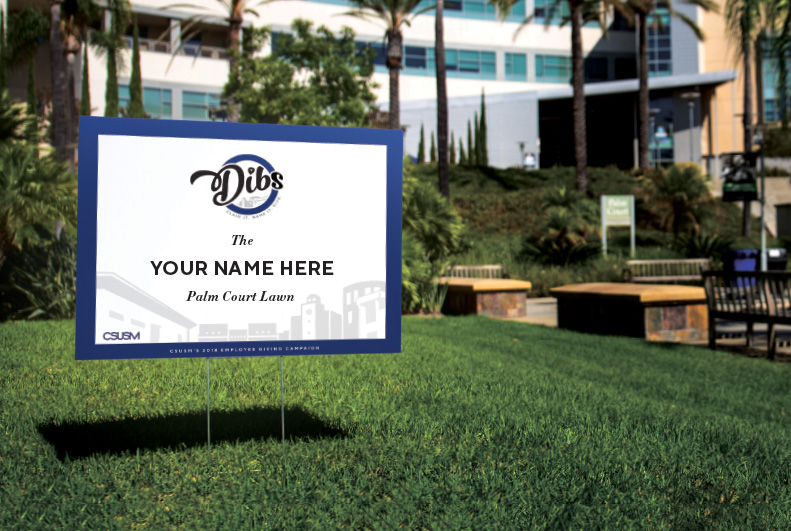 Calling “dibs” isn’t restricted to child’s play. A playful employee giving campaign at CSUSM has embraced the expression and is inviting faculty and staff to do just that – call “dibs” to temporarily name a unique campus landmark for 15 days in October.

Last year, students experiencing hardship (and who met the eligibility requirements) requested a combined $16,600 from the Student Emergency Fund, of which only 80 percent could be funded due to limited resources. The fund provides a one-time gift, not a loan, to help students experiencing homelessness, hunger, severe illness or injury, or a natural disaster.

Annual giving programs director Sean Briner is hoping Dibs can change the statistic by providing more significant support for students whose financial hardship could disrupt their progress toward a degree.

It’s a much-needed resource that resonates with Hunter Chanove ‘16.

“I had a roommate when I was a student who needed and received aid from the Student Emergency Fund,” Chanove said. “It was a very difficult time and I know that without that support, he would have had to delay his education, perhaps indefinitely.”

“Dibs is such a creative and innovative way to be part of something bigger at CSUSM,” he said. “I get to help alleviate a financial burden for students experiencing crisis, and for me, that’s exactly what being Forward Together means.”

Dibs gives employees hundreds of naming options, at prices starting at $25, including naming a coffee at Jazzman's Café, a favorite bench, an office or conference room, a USU terrace and even the iconic rotunda of Craven Hall. Signage honoring the donor will be posted on campus Oct. 1-15.

While the campaign concept isn’t new to university campuses – it’s modeled after CSU Northridge’s “15 Days of Fame” – Dibs takes on a playful twist that is unique to the CSUSM culture. Every year, the fall employee giving campaign raises funds for various University initiatives. But the focus isn’t set on a dollar goal; instead, the campaign emphasizes growing a culture of philanthropy among employees.

Dibs is doing just that. Two weeks into the campaign, employees have already begun to stake their claim. For nearly a third of the employees calling “dibs,” this is their first donation to the University.

“It’s exciting to see our employee donor base continue to grow,” Briner said, noting that employee giving has increased 121 percent since 2014. “Dibs is another fun opportunity to make a positive impact in the lives of our students.”

The Dibs campaign closes on Sept. 21 as signs go into production. Call “dibs” before your colleagues by visiting csusm.edu/dibs or contact Briner at sbriner@csusm.edu.

Holiday Traditions Around the World on Dec. 2

Dear students and colleagues,Do you wonder how people around the world celebrate the holidays? What do they eat? What do they do? Are holidays even “a thing”? The CSUSM International Faculty and …
Read more

Announcing Our Interim Executive Director of the Institute for Palliative Care

Dear faculty and staff,Please help spread the word about the Student Satisfaction Inventory (SSI)! This survey, which went out to all undergraduate degree-seeking students at CSUSM (including both …
Read more
NewsCenter