Michelle Mullen, the executive vice president of San Diego-based AVID Center, a global education nonprofit, was honored with the Fran Aleshire Leadership Award for her outstanding leadership and regional involvement at the annual Report to the Community at Cal State San Marcos on Thursday, Feb. 6. 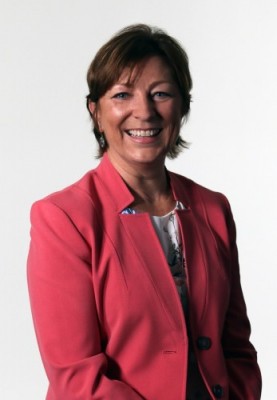 “The Fran Aleshire Award recognizes the power of commitment – both of the leaders engaged in our community and of the folks who coalesce with those leaders to take action on important issues of our time,” Mullen said. “I am honored to be included with the other amazing Leadership North County alumni who have received this recognition, and it’s a humble reminder to me that my commitment must be long-lasting.”

In her role with AVID (Advancement Via Individual Determination), Mullen oversees all the programs, products and services that support educators, students and families from kindergarten through higher education. Founded in 1980 in San Diego, AVID has been implemented in more than 7,000 schools in 47 states, plus schools in Department of Defense Education, Canada and Australia. The organization impacts more than two million students in grades K-12 and 62 postsecondary institutions.

Mullen has a long history with AVID, starting as an AVID teacher and coordinator in 1991, and then working as a district mentor teacher, curriculum writer, staff developer, consultant and finally director with AVID Center in 2012.

Before joining AVID Center, Mullen was the director of the Single Subject Credential Program and an instructor in CSUSM’s School of Education from 2000 to 2006. There, she helped conceptualize and develop an integrated and forward-thinking teacher preparation program that included partnerships with local high schools, a focus on action research, an interdisciplinary approach to curriculum design, and blended learning.

Mullen holds a master’s degree in curriculum and instruction, a bachelor’s in English and a teaching credential from the University of San Diego, as well as an administrative credential from CSUSM.

In addition to her work at AVID Center, she is a longtime volunteer with Girl Scouts San Diego, her local YMCA, and within her local educational community.