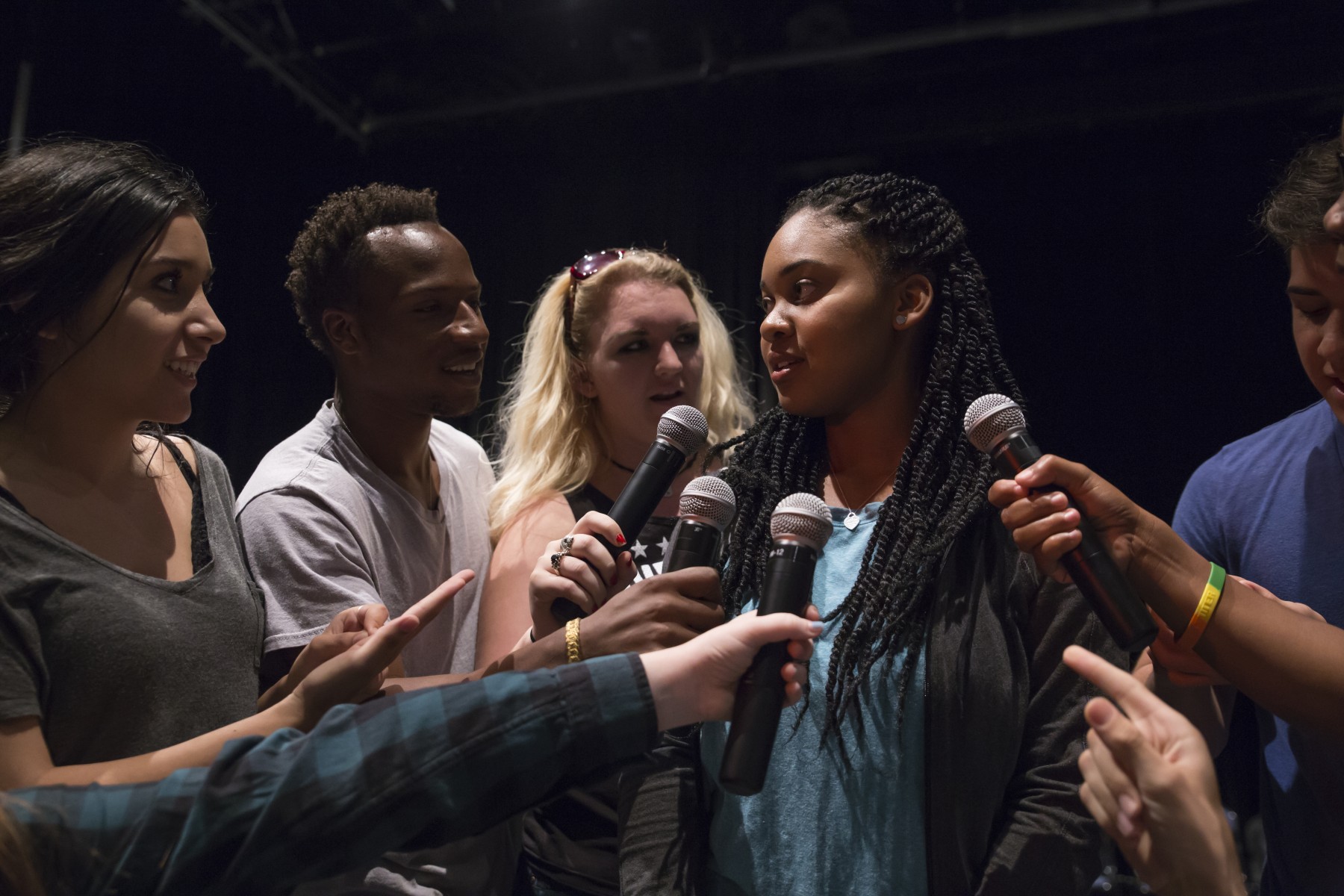 Good Kids
The fall 2015 theatre performance of "Good Kids"many pressing themes, including rape culture and the often prevailing notion that it is the responsibility of a woman to take precautions against sexual violence, rather than questioning how contemporary discourse gives permission to men to act as predators.

The theatre program at California State University San Marcos (CSUSM) is pleased to present the west coast premiere of Good Kids, written by Naomi Iizuka, one of the nation’s most acclaimed dramatists and head of playwriting at the University of California San Diego. The play, which runs from October 14-18, was commissioned by the Big Ten Theatre Consortium to support female playwrights and actors.

The CSUSM performance, directed by Associate Professor Judy Bauerlein, is based on actual recent events in Steubenville, Ohio when a high school girl was publicly and repeatedly sexually assaulted by members of the local high school football team, several of whom documented the acts in social media. Set in the American Midwest in a world of Facebook, Twitter, smart phones and YouTube, Good Kids explores a case of sexual assault and its very public aftermath, asking the questions: Are these good kids? Who's telling the truth? Whose version of the story do you believe? And what does that say about you?

“When I first read this play I knew immediately that I wanted to direct and produce it at CSUSM,” said Bauerlein. “I was drawn to the social environment that the characters live in, the familiar and harrowing nature of the theme of sexual assault, and the beautiful portrayals of the characters—all good, all flawed and all blindly balancing bravado and vulnerability.”

Brianna Dodson, a third year theatre major, plays the role of Skyler, a lonely outsider who calls 911 to report the rape of Chloe, the lead character who wakes up in the morning without any memory of the party she attended the night before.

“All the characters are relatable people—the jocks, the mean girls, the outsiders,” said Brianna. “It’s interesting to see how everyone reacts to the situation. Some characters victim-blame while others speak up and do the right thing. Skylar is ahead of her years in terms of maturity—she’s bold and doesn’t want to deal with mediocrity.”

Good Kids tackles many pressing themes, including rape culture and the often prevailing notion that it is the responsibility of a woman to take precautions against sexual violence, rather than questioning how contemporary discourse gives permission to men to act as predators. The play also reflects what many point to as a national obsession with football, where players are upheld as heroes in an environment of entitlement and “boys will be boys.”

Tickets are now available online for the six performances, $10 for students and $12 for members of the general public. Please note that this performance includes adult language and content as well as information about sexual assault and violence, which may be triggering to survivors.

Tickets: Tickets are $10 for students and $12 for members of the general public and are available for purchase online or at the door.

Directions and Parking: CSUSM is located at 333 S. Twin Oaks Valley Road in San Marcos. Parking is available in campus lots with fees depending upon length of stay. Parking Structure 1 is the closest lot to the Arts Building, at the corner of Campus Way and Campus View Drive. For more information or directions to the campus, visit http://www.csusm.edu/guide.