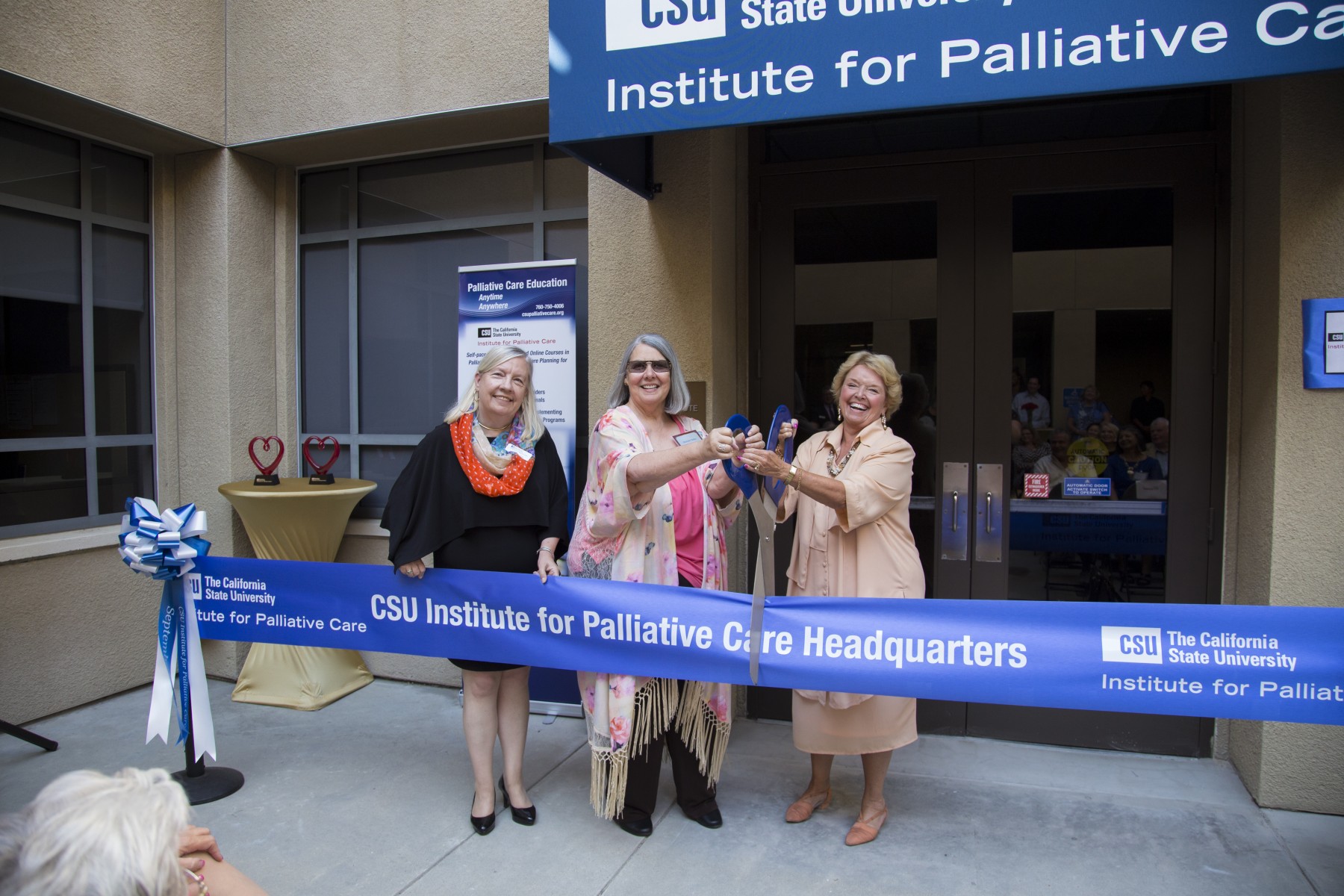 The CSU Institute for Palliative Care has been doing vital work for four years, but on Wednesday, Sept. 7, it had a chance to celebrate a grand opening.

Helen B. McNeal, executive director of the Institute, was joined by Cal State San Marcos President Karen Haynes and philanthropist Darlene Shiley for a ceremonial ribbon cutting as dozens of guests helped to celebrate the official opening of the Institute’s new facility on CSUSM’s campus.

“Palliative care is the answer to changing the journey of serious and chronic illness that so many of us will face — and change it for the better,” Haynes told attendees. “I am pleased that one of the important forces for making this change a reality has its home here at Cal State San Marcos.”

“Advancing compassionate care and ensuring that everyone has access to the best quality of life through palliative care is essential,” Haynes said. “And we envision a future in which it is readily available to all.”

The festivities also included the inaugural awarding of the Doris A. Howell MD Award for Advancing Palliative Care. The awards were presented to Dr. Daniel R. Hoefer and Suzi K. Johnson of Sharp HealthCare. Hoefer is chief medical officer of outpatient palliative care and associate medical director for Sharp HospiceCare, while Johnson is vice president for Sharp HospiceCare.

“Together, Dan and Suzi have been instrumental in Sharp’s leading edge work in incorporating palliative care across Sharp and in advancing the care of those with serious and chronic illness in San Diego and nationally,” McNeal said.

Four years ago, Shiley surprised attendees and organizers at the launch event for the CSU Institute for Palliative Care with a $1.2 million gift. Shiley, whose contributions in support of the Institute have surpassed $3 million, provided another pleasant surprise at the reception honoring Hoefer and Johnson.

Shiley pledged support to the Institute so that a monetary award will accompany this prestigious award in perpetuity.

“It just seemed like the right thing to do at the right time,” Shiley said. “It’s a great honor for me to do something that would honor Dr. Howell. That’s why I do what I do.”

Howell, who was in attendance at the reception, had a long and distinguished career in medicine and was the driving force in establishing San Diego Hospice and the Institute for Palliative Medicine in the 1970s.

“Her commitment to providing compassionate, dignified, quality palliative and end-of-life care has been unswerving,” McNeal said.

Though the Institute was founded at CSUSM, it has grown to include eight CSU campuses. McNeal said the Howell Award will be presented by all of the Institute’s partner campuses to leaders in their respective communities beginning next year.

“If we might be so bold, we hope one day that this award will be to the palliative care community as the DAISY Award is to nurses nationally,” McNeal said.

McNeal also noted the contributions of Haynes, CSUSM Vice President of Finance and Administrative Services Linda Hawk and the CSU Office of the Chancellor in helping the Institute secure space for a new home on CSUSM’s campus.

“It is gratifying to see what has been accomplished in such a short period of time,” Haynes said.