Brewing Beer Is a Passion for Young Alum 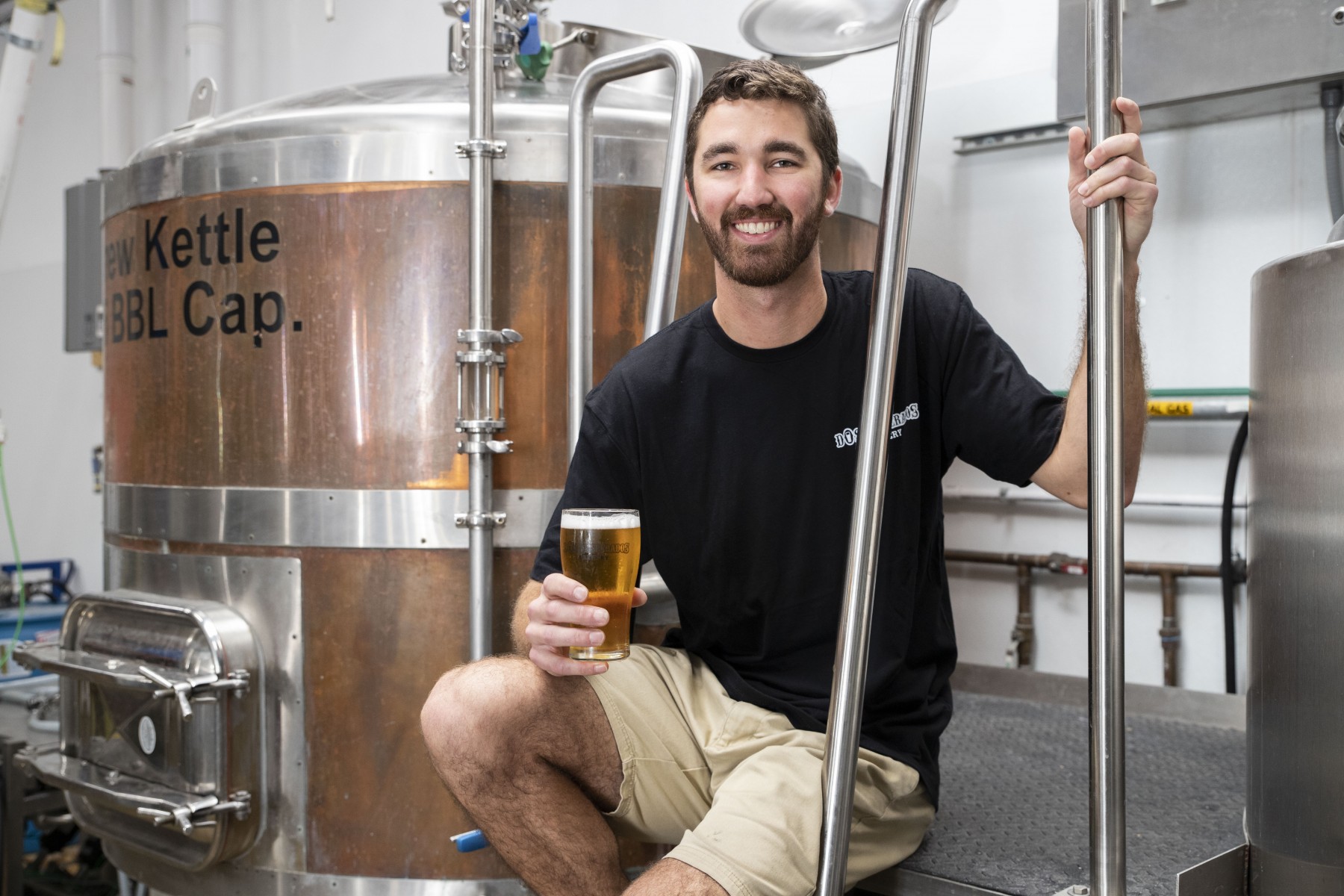 Hayden Weir
The 24-year-old CSUSM graduate is pictured next to a fermenter at Dos Desperados, the San Marcos brewery where he is head brewer. Photo by Andrew Reed

Hayden Weir wanted to brew beer before he was old enough to drink it.

The interest originated when Weir and a friend, as a fun experiment, tried one of those five-gallon Mr. Beer home-brew kits that you can buy at your local Target. It blossomed at Cal State San Marcos when he discovered that San Diego is home to a colossal, $1 billion craft beer industry.

By the time he was in his first job, at Five Guys burger restaurant in San Marcos during the summer before his third year at CSUSM in 2015, Weir had decided that he wanted to learn the trade at a local brewery – even if he had to start off by working for free.

Little did he know that his future employer was located just down the street.

The manager of Five Guys was friends with Steve Munson, the owner of a nearby brewery called Dos Desperados that he had founded the previous year, and he convinced Munson to give Weir a shot. Weir was hired in June 2015, a little more than a month after his 21st birthday

Three-and-half years later, at age 24, he’s Dos Desperados’ head brewer, likely one of the youngest ones in perhaps the nation’s biggest market for craft beer.

“I’m still trying to wrap my head around it now,” Weir said. “I’m so young in this industry. People have been doing it so long. I’m a head brewer and trying all these local breweries, and I’m in groups on Facebook seeing these people doing so much crazier stuff than I am.”

Weir started at Dos Desperados as a part-time apprentice. He would clean the outside of the tanks. He would tend bar. He would obsessively observe every aspect of the brewing process, taking copious mental notes along the way. And since his baseball schedule was light that summer – from Torrance, he attended CSUSM on an athletic scholarship and pitched for four seasons – Weir also doubled up at Five Guys for a spell.

“It was a good summer, getting free burgers and fries and some free beer,” he joked. “I didn’t have to hate working two jobs because they had pretty good perks.”

Weir switched to a full-time schedule at Dos Desperados after he graduated from CSUSM with a degree in environmental studies in May 2017. He gradually took on more of the brewing duties and was officially promoted to head brewer last April, after his predecessor, a seasoned veteran in the field, moved back to his home state of New Hampshire to start his own brewery. 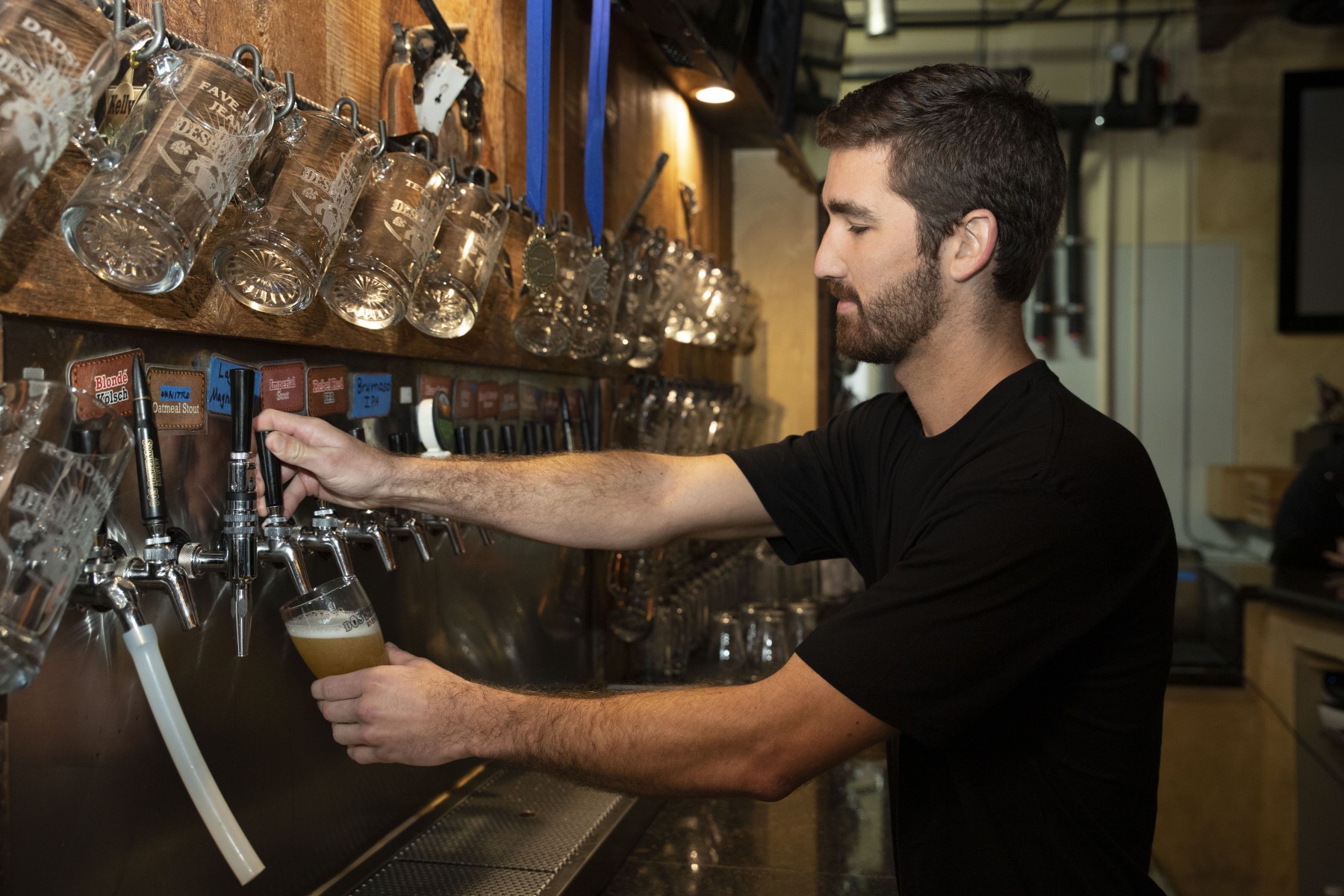 Hayden Weir
Weir has worked at Dos Desperados since soon after his 21st birthday and has been head brewer since last April. Photo by Andrew Reed

“I definitely felt ready,” Weir said. “We were in a weird position where, from January 2018 to when he left in April, we were taking turns brewing. I was thrown into being the brewer and getting the idea of doing it on my own, and then he would take over. So it was a slow transition, and I was eased into it. Then once he left, I was like, ‘OK, I got this.’ ”

The first beer that Weir made as head brewer was a New England-style IPA that he named Hazy Daisy, combining the type of beer (hazy IPA) with the name of his golden retriever. He brewed it over the gentle objections of Munson, who is from New England but generally prefers more traditional beers over trendy ones.

Hazy Daisy proved to be a big hit. Weir says it’s now the most popular of the 15 or so beers that Dos Desperados offers at any given time, and last fall the brewery publication West Coaster named it its beer of the week.

“I will never forget when Steve tried it from the tap for the first time,” Weir recalled. “He shook my hand multiple times and said, ‘Great job, great job.’ ”

Even in college, Weir’s passion for craft beer was such that he bended his academic pursuits around it. He started at CSUSM as a business major but didn’t like the classes, and his grades reflected his apathy. In fall 2014, he became one of the first six students to join the new discipline of environmental studies, and during his final year he began to zero in on essays and presentations with a beer bent: hop farming, sustainability in brewing, sourcing of beer ingredients. Needless to say, his GPA improved.

Baseball even took a back seat to beer as his collegiate career wound down.

“Hayden always seemed to know more about beer and the better craft beers than any of us,” said Jack Garcia, Weir’s teammate and roommate at CSUSM. “Everyone on the team and our roommates knew he had a special gift for awesome taste and the work ethic to achieve his dream.”

As he finds his way in a market that’s packed with award-winning brewers who boast decades of experiences, Weir is heartened by the help and advice he has received, including from fellow alums – two of his go-to guys are Ben Fairweather (class of 2014) and Mike Stevenson (2012), who own Culver Beer Company in Carlsbad.

And inspired by the success of Hazy Daisy, not to mention the overall experimental nature of San Diego craft breweries, Weir continues to try to push the envelope. He recently made a red IPA, is exploring interesting twists on otherwise ordinary lagers and pilsners, and hopes to acquire bourbon barrels for aging an imperial stout.

Still a relative newbie in the industry, he’s content to hone his craft and make Dos Desperados a destination off the Hops Highway. But he does aspire to start his own brewery someday. He even has picked out the name already:

Brewing Beer Is a Passion for Young Alum