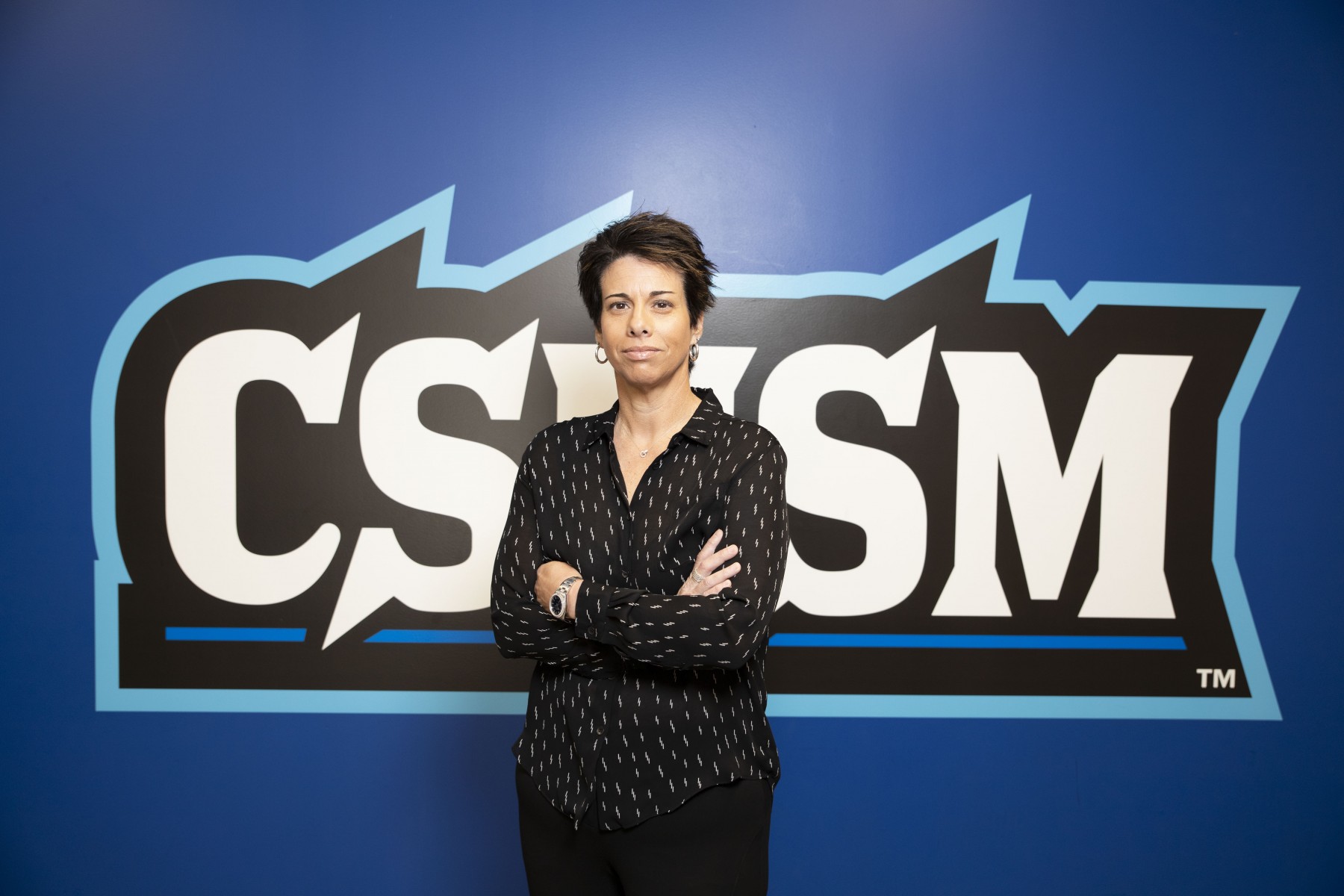 Jennifer Milo is in her ninth year as CSUSM's director of athletics after the university originally hired her as its first softball coach.

The job listing was for a softball coach at Cal State San Marcos, which was perfect because softball was what Jennifer Milo knew and loved most.

Milo was in her third year as the top assistant for the softball team at San Diego State. She had been a standout player in the sport since she was a kid growing up in Orange County. At the University of San Diego, which recruited her out of high school, she had played every inning of every game over four seasons and had her jersey number retired.

Of course, there was the small matter that Milo had lived in San Diego for more than a decade and didn’t know that CSUSM even existed. But it seemed like it would be a great opportunity to build a new program from scratch.

On the day she interviewed for the job in the fall of 2005, Milo remembers seeing a little white sign with the name of the university at the corner of Twin Oaks Valley Road and Barham Drive, surrounded by “weeds and a bunch of land.” She remembers walking into an athletics suite that consisted of exactly five employees, including an athletic director who doubled as a faculty member. She remembers asking that AD, Steve Nichols, who would be treating players’ injuries or who would be keeping score during games, and being greeted with little more than a shrug.

Milo left campus that day with two distinct impressions: CSUSM athletics represented a reservoir of untapped potential, and the university – even if it didn’t fully realize it then – had a need that went far beyond just a new softball coach.

And she, as it turned out, was the right person at the right time to fill it.

Today, Milo, 44, is in her ninth year as CSUSM’s director of athletics – the third one in the two decades that intercollegiate sports have existed at CSUSM. She’s the leader of a department that now numbers more than 40 in staff, including three athletic trainers who treat injuries and three sports information employees who keep score and stats among myriad duties. She oversaw a three-year transition from the NAIA to NCAA Division II that was so smooth and well-orchestrated that it’s considered a template for other schools to follow. She facilitated the construction of multiple athletic facilities, including The Sports Center, a sparkling, $11.4 million arena that opened in 2016.

Even all these years later, Milo is still amazed by the sharp but satisfying detour that her career has taken.

“Growing up, being a student-athlete, being a coach, I never thought about becoming an AD. It never crossed my mind,” Milo said. “And I never would have had the opportunity to do what I’m doing now if I wasn’t here at that time in the department’s development.” 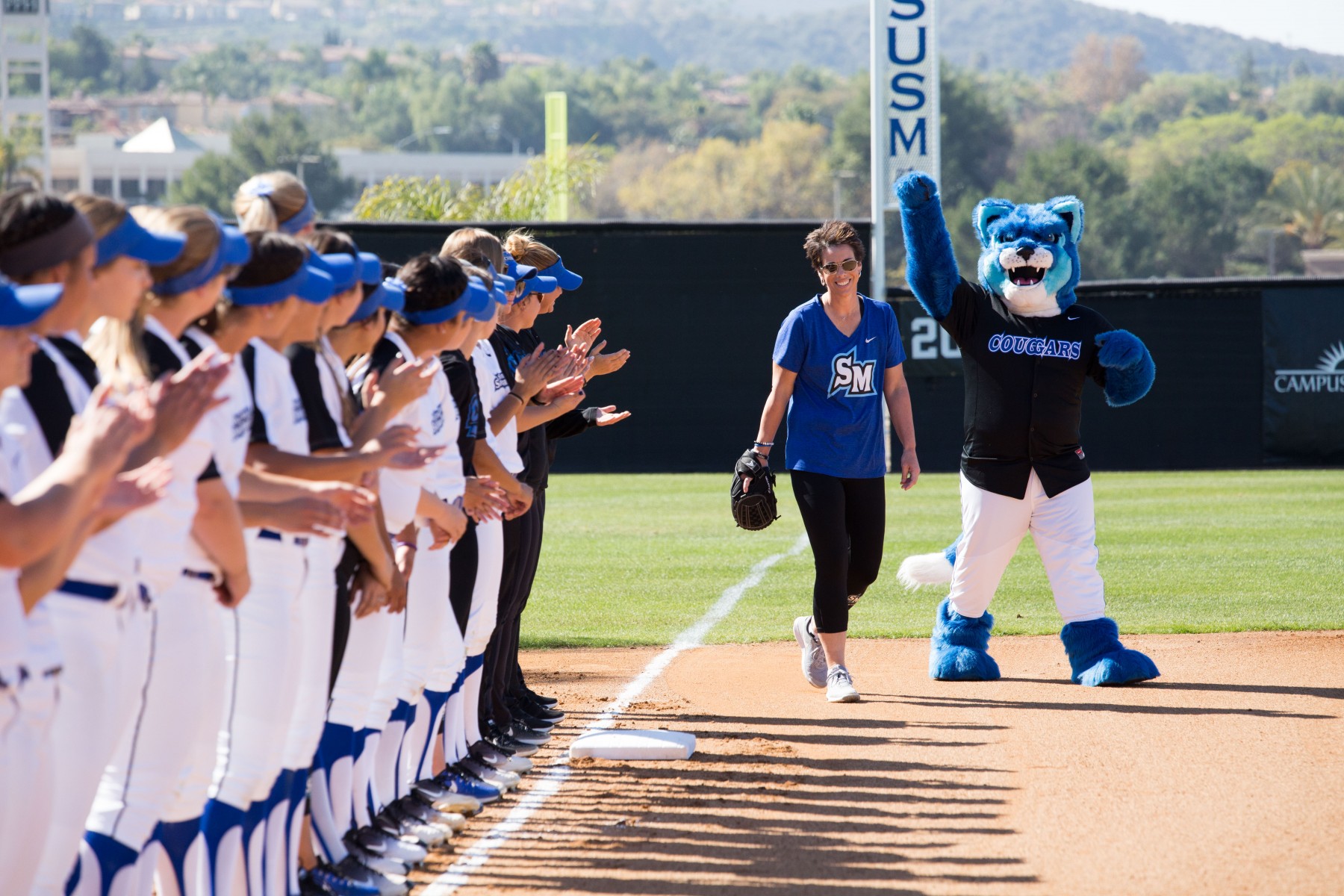 Jen Milo never imagined that she would do anything but coach softball at CSUSM. Becoming an AD "never crossed my mind," she said.

Hired in October 2005, Milo spent most of her first year at CSUSM doing the heavy lifting required in starting up a program that wouldn’t play its first game for 17 months. However, because of the unique qualifications she brought to the job – a Division I student-athlete who proceeded to coach for seven years at the same level, but who also earned a master’s in counseling from USD and was an academic counselor for the men’s basketball team at SDSU – she increasingly found herself being pulled in other directions by colleagues who wanted to draw on her experience at a higher tier of athletics.

After the debut season of the softball team in 2007, Milo presented Nichols with a choice: Did he want her to be a coach or an administrator? Because she couldn’t be both. Nichols assigned her the new title of associate AD for development.

That title might as well have been “procurer of fields.” CSUSM had added its first team sports during that academic year – baseball and men’s and women’s soccer in addition to softball – but they all lacked a proper venue for games. The soccer teams at least played on campus, on the field in the middle of Mangrum Track, but baseball and softball were forced to hoof it to local high schools.

The university had gone about its program-building backward – teams before fields – and it was Milo’s responsibility to help remedy that. She threw herself into the unfamiliar job with vigor, and she delivered results: An on-campus softball field opened in time for the 2010 season, with a baseball field following a year later.

“Getting the baseball and softball fields built was a huge piece, and that was all done with private funds,” Milo said. “It was parents of softball players saying, ‘Hey, I know a plumber, I know of a fencing company.’ To be able to do what we did with private support and build amazing fields was really the start of my metamorphosis into thinking I wanted to do this for my career.”

Nichols, as a political science professor, was never intended to be a permanent AD, and when the time came in 2009 to replace him with someone more suited to the job, Milo tossed her hat in the ring. CSUSM instead hired Tom Seitz, who had been an AD at a pair of small Division I schools.

Three years later, when Seitz departed, Milo urged then-President Karen Haynes not to pass over her again. She appealed to the importance of stability at a time when CSUSM already had been denied twice by the NCAA in its attempt to move up to Division II.

“I was very honest with the president,” Milo said. “I told her, ‘I wanted this three years ago, I’m still in the same spot, take a chance.’ ”

Haynes took a chance, and in April 2012, Milo became part of the 4 percent of women athletic directors among more than 1,200 schools in the three divisions of the NCAA. In the last seven years, that figure has nearly quadrupled to about 15 percent. Female representation is especially robust in the California Collegiate Athletic Conference, which the Cougars joined in 2015, with women accounting for four of the 13 ADs (31 percent).

“Before Jen took the AD job, she was building toward it,” said Todd Snedden, whom Milo elevated to associate AD soon after she was promoted herself. “When she got the position in 2012, she hit the ground running. Everything has been strategic, it’s been planned, it’s been organized, and it’s been executed perfectly.” 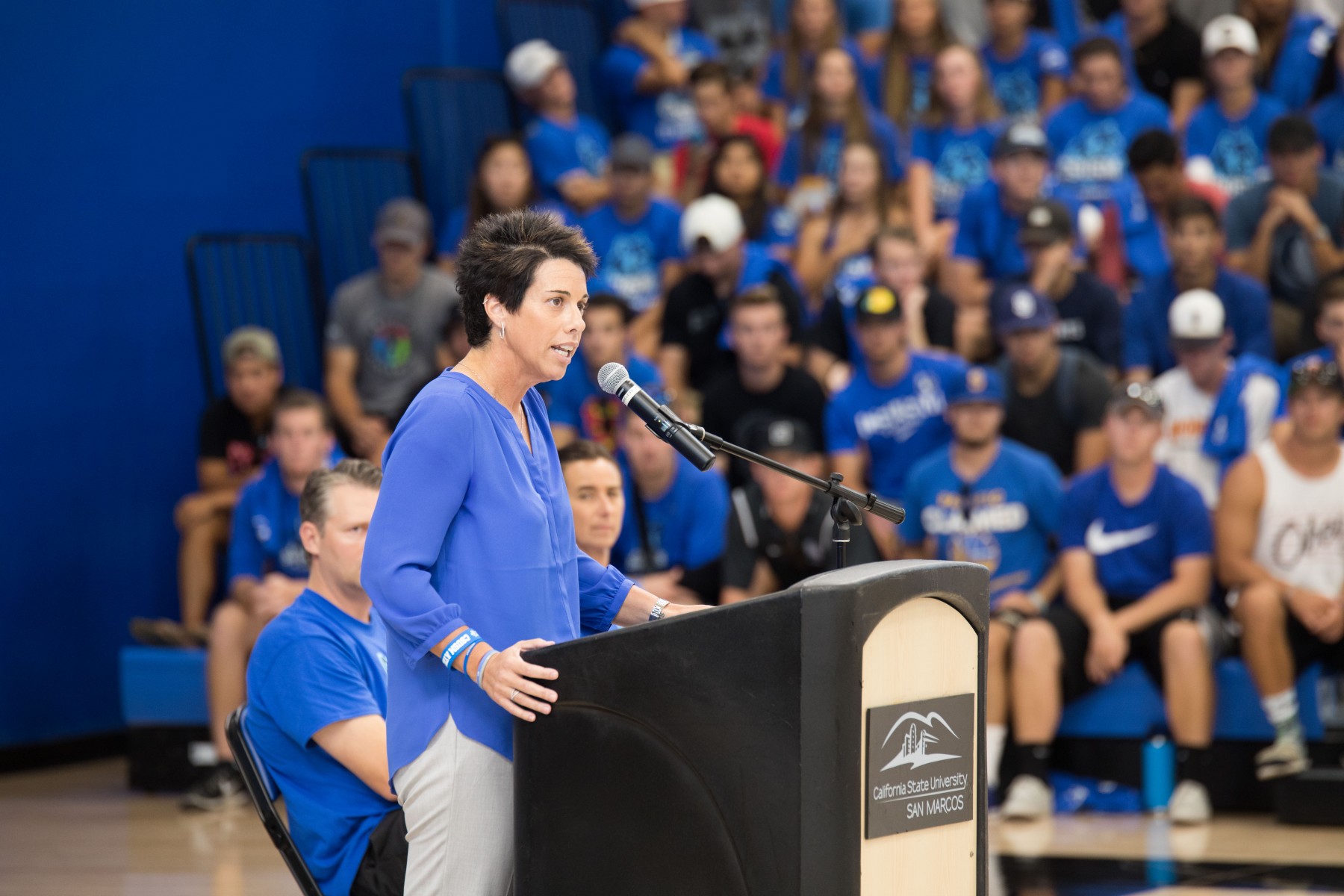 As athletic director, Jen Milo oversaw a three-year transition to a much higher level of competition in NCAA Division II.

Milo carried out her vision for the department to the smallest detail. Soon after being named to the post, she circulated around the athletic offices in the Clarke Field House, delivering laminated cards to every coach and staff member that laid out the values she holds dear.

Eventually, it was time to take her values and transform them into the department’s values. In 2014, as the pursuit of Division II membership was ramping up, Milo summoned the whole staff for a daylong retreat at a hotel in Carlsbad. There, they collectively came up with a system that they called TRACS, which stands for Trust, Respect, Attitude, Communication and Support (they swear that the acronym’s similarity to the tracks of a cougar is strictly coincidental). Two more values were tacked on later, so it’s now TRACS through Excellence and Integrity.

That value system guided Milo and her staff as they went through the arduous and time-intensive process of transitioning to the NCAA. Milo had to coordinate with multiple campus partners to devise things like a student-athlete handbook, a compliance manual, various policies and procedures. In many cases, CSUSM surpassed what was required by the NCAA and set the bar for other CCAA institutions.

In January 2019, Cougars women’s volleyball coach Andrea Leonard attended the annual NCAA convention in Orlando, Fla., where she talked to consulting firms that told her they now use CSUSM as a model for how to move up a level in athletic membership.

“That’s when you know you’ve done things right,” said Leonard, who was hired in 2011, the year before Milo became AD. “It was not easy. We had a lot of people who liked the way we did things before, when there wasn’t a lot of accountability or rules because you could get away with it in the NAIA. It’s completely different now. You feel proud to be part of something where there’s expectation. It’s a commitment to excellence.”

The commitment also extends to the classroom. Milo is fond of bragging that, as of the fall semester, 66 percent of CSUSM student-athletes carried at least a 3.0 grade-point average. And slowly but surely, it’s applying to athletic competition as well. The Cougars absorbed some knocks in joining the CCAA, the most competitive conference in Division II, but success has started to come. In 2017-18, their first year as a full-fledged league member, they finished fourth out of 13 schools in the Robert J. Hiegert Commissioner’s Cup, which measures aggregate results across eight sports. They followed that up by placing fifth last year, and this year the women's basketball team made the NCAA Division II tournament for the first time.

As much as Milo has accomplished during her tenure as AD, she likes to say that only half the work is done. Phase 1 involved the building of fields for baseball, softball and soccer; the construction of The Sports Center for basketball and volleyball; the transition to the NCAA.

But Phase 2 is no less important. Milo envisions the facilities for all sports ultimately having the same “fan amenity environment” that now only exists in The Sports Center – lights, seating, restrooms, concession stands. She also wants to bolster the athletic scholarship pool because “that’s how you recruit the best of the best.” The long-term plan includes building out the rest of the 25-acre plot of land near the front of campus with centers for aquatic sports and campus recreation, though the price tag for the entire next phase – about $100 million – means that reality could be slow to follow the dream.

Milo, however, is undaunted. Will she be around to watch it all come to fruition? The softball coach turned career athletic director doesn’t see why not.

“This is the perfect fit for me. I’m rooted here,” she said. “Is this my forever job? I hope so. I have no aspirations of going up to Division I. I do consider this home.”