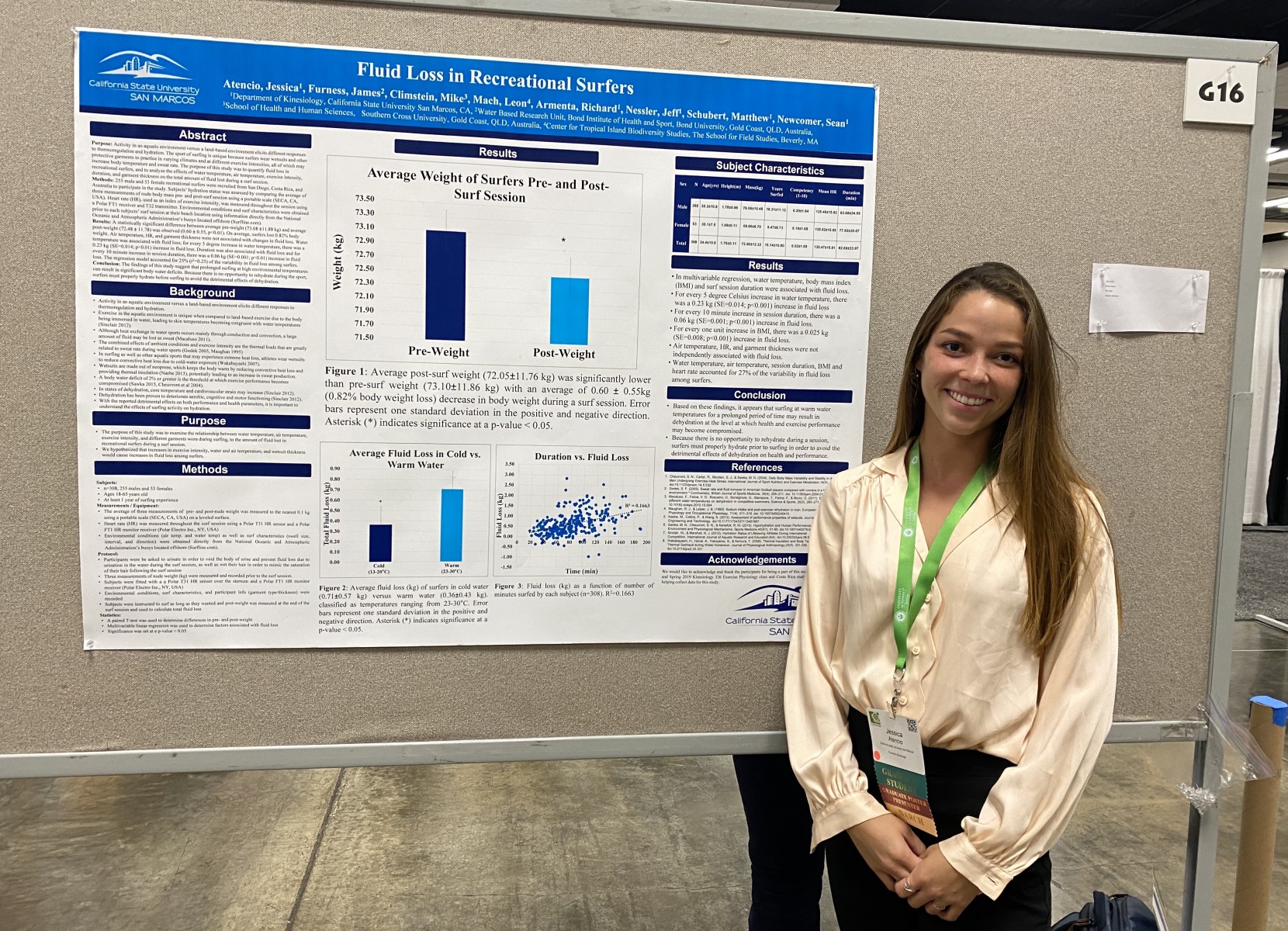 Jessica Atencio will begin a Ph.D. program at the University of Oregon this fall.

Jessica Atencio hasn’t been able to do any surfing since California’s shelter-in-place order went into effect last month.

But Atencio has found a silver lining.

“I’ve been able to focus on thesis writing,” Atencio said. “I can get distracted at times, so just being forced to stay at home and put all my energy into that has been really good.”

Atencio’s efforts have certainly paid off. Not only will she graduate from Cal State San Marcos this month with her master’s in kinesiology, she also was recently named the recipient of the Dean’s Award for Graduate Studies, an annual honor recognizing one graduate student for excellence in academic, professional and service activities.

“Jessica is enthusiastic, energetic, positive and an exceptionally well-rounded student,” kinesiology professor Sean Newcomer said. “I am continually impressed with the diversity of her talents.

“She has performed extremely well in the classroom, and faculty members continually comment on her dedication, critical-thinking skills and her ability to place her knowledge within a larger cultural context to ensure her work will address pressing issues we will face in the near and distant future.”

Atencio and her twin sister, Anastasia, who attended UC Santa Barbara, are first-generation college graduates who were encouraged by their father to pursue higher education.

A member of the Juaneño Band of Mission Indians, Acjachemen Nation, Atencio became involved in the Native American Research Centers for Health (NARCH) during her sophomore year at San Diego State, where she earned her bachelor’s in kinesiology. The experience with NARCH has fueled her passion for mentoring other students from underrepresented backgrounds.

“What first stood out to me about Jessica was her drive to succeed and make her family proud,” said Richard Armenta, research director in the student development program for NARCH and a CSUSM kinesiology professor. “I have also been fortunate to get to know her father over the years, and I know how proud he is of her development and accomplishments.”

Atencio grew up surfing with her father in Orange County, and CSUSM was a natural fit when Armenta told her about Newcomer’s surfing research. Atencio reached out to Newcomer during her final semester at SDSU and began working as a research intern in his lab even before she had been accepted to the master’s program at CSUSM.

“This commitment to my laboratory, with no guarantee of her being accepted into our graduate program, spoke volumes about her work ethic and passion for research,” Newcomer said.

Atencio led a research project that examined the interaction between surfing and thermoregulation as part of a collaborative effort between scientists at the Nike Sports Research Laboratory, wetsuit designers in the Hurley Innovation Department and the CSUSM Surf Research Laboratory.

Newcomer was impressed by Atencio’s leadership as well as her organizational and problem-solving skills, and she was accepted into CSUSM’s graduate program for fall 2018. With encouragement from Armenta, Atencio was also accepted into CSUSM’s Research Initiative for Scientific Enhancement (RISE) program, which is funded by the National Institute of General Medical Sciences and prepares underrepresented undergraduate and graduate students majoring in the sciences to enter and succeed in doctoral studies.

“Just being part of the RISE program really solidified my desire to pursue a Ph.D.,” she said.

At CSUSM, Atencio combined her interest in exercise physiology with her passion for surfing, resulting in a research project in which she studied the physiological effects of surfing on hydration and fluid loss in recreational surfers.

Atencio’s experience on the project and the opportunity to teach and mentor undergraduate kinesiology students at CSUSM has furthered her goal to earn a doctorate. This fall, she will begin a Ph.D. program in human physiology at the University of Oregon, where she has been selected as a 2020-21 Graduate School Promising Scholar, a cohort of applicants chosen for their strong academic promise and potential to contribute to the diversity of their prospective graduate program.

Atencio’s long-term goal is to work in academia so she can follow her passion for teaching and mentoring students while also conducting research.

“Over the past six years, I have watched Jessica grow immensely, personally and professionally, and I am excited to watch her continued growth as a Ph.D. student and beyond,” Armenta said. “I have no doubt that Jessica will continue to be successful in her education and career.”