Basketball Standout an Inspiration On and Off Court 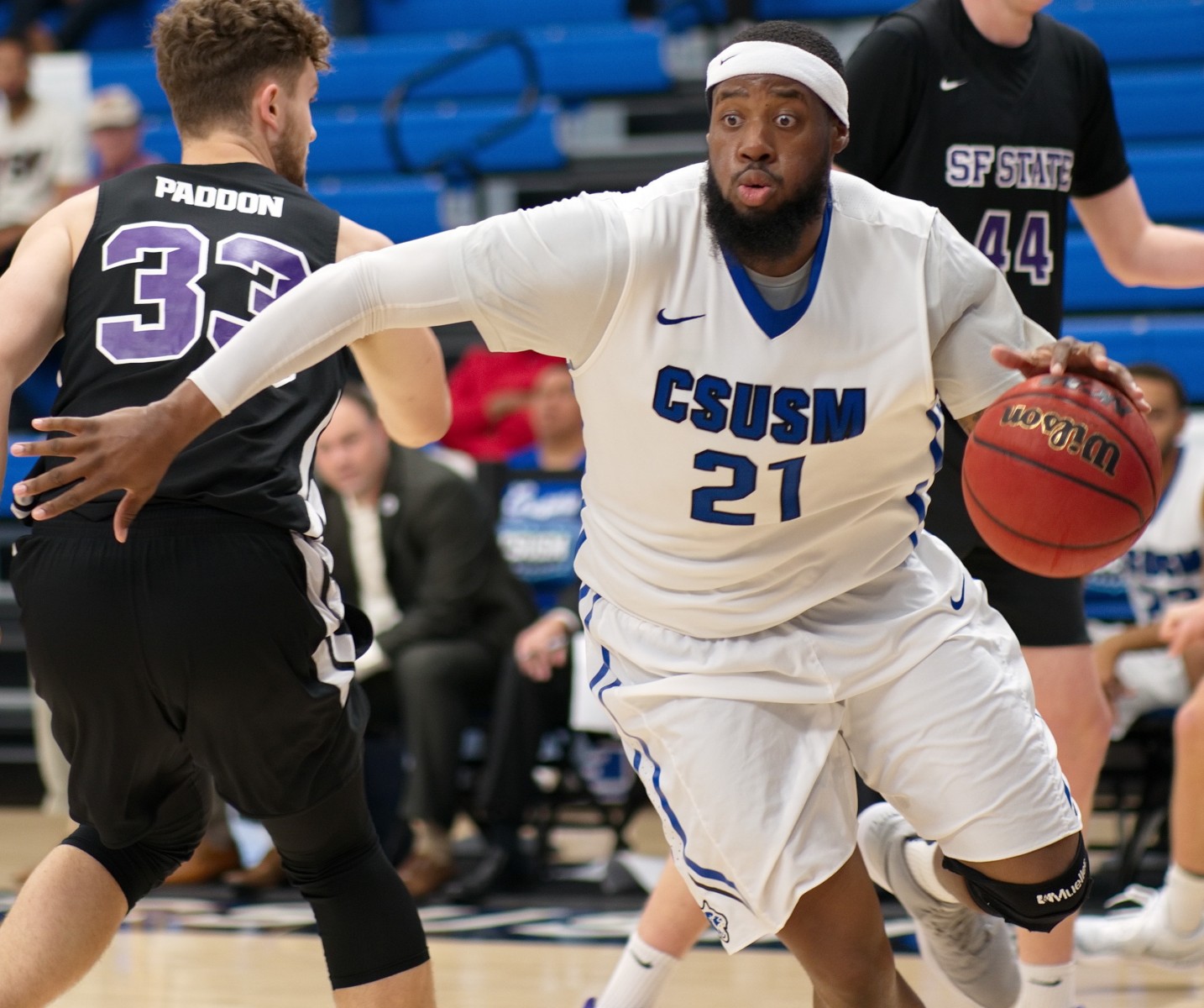 There are times when random memories fill Khalil Fuller’s thoughts. He recalls the talks that have helped guide him through life’s difficult journeys. The rides to school and to basketball practice. There were the meals they shared, the life lessons passed along from father to son, from grandfather to grandson.

Memories so deep he can never forget them.

“More than anything, I just miss their presence,” said Fuller, who lost his father at the age of 16 and his grandfather five years later, both to cancer. “It was hard for me because my father was my best friend and I no longer knew which direction was right for me.”

Fuller is a junior at Cal State San Marcos. At 6-foot-8, 250 pounds, he is seemingly built out of granite. He fittingly plays power forward for the Cougars men’s basketball team and leads the squad in most statistical categories this season. His strength on the court and in the weight room is impressive. But his inner resolve is what makes his comeback story that much better.

Fuller’s positive energy off the court is obvious to anyone who crosses paths with him. But his optimistic outlook on life in the face of tragedy has made him an inspiration for so many people.

“My baby is my inspiration and motivation every day,” said his mom Olga. “He has endured so much, but he still has such a personality that attracts people. He has always been a leader, and he is ridiculously funny like his dad and loud like his dad. Khalil even has the same laugh as his dad.

“My father used to say, ‘What does not kill you makes you stronger.’ Khalil has become such a responsible young man. He has learned how to appreciate what matters, and he knows that tomorrow is not guaranteed.”

The 2018-19 season hasn’t produced a lot of wins for the Cougars, but Fuller has had an outstanding campaign while emerging as one of the team leaders on and off the court. He’s a skilled player with a work ethic to match.

“Khalil is a hard worker,” Cougars head coach B.J. Foster said. “He is a big, physical, back-to-the-basket player and has good moves over both shoulders, plus he rebounds very well. Khalil actually leads our team in most stat categories, one of them being rebounds. Khalil is very skilled in the key and is learning to extend his range and ability to play out at the top of the key area.”

The Moreno Valley product is averaging 14.0 points and 8.1 rebounds per game, both tops on the team. He’s also among the team leaders in assists, steals and blocked shots. He’s capable of putting up a double-double every night, evidenced by his 32-point, 12-rebound performance earlier this season against Azusa Pacific. He will be looking for a similar effort on Saturday when the Cougars host Stanislaus State at 3 p.m. as part of a homecoming basketball doubleheader (the CSUSM women host Stanislaus State at 1 p.m. Saturday).

“The season has been rough but while I am happy with the way I have been able to contribute, I’d like to contribute more so it can reflect on the team’s record and we can have more wins,” said Fuller, who is majoring in communication. “For the rest of this season, I would like to win the rest of our games so we can make it to the CCAA tourney. For my senior season, I’d like to make it to the NCAA tournament and be recognized nationally as one of the top players.”

After playing his high school ball at both West Oaks Academy in Orlando, Florida, and Rancho Verde High in Moreno Valley, he spent three years at the University of North Texas, including a redshirt year.

Fuller arrived on campus at CSUSM in 2018 and has already left an indelible mark with his hard work on the court and constant smile walking through the athletic department. For Fuller, it was an easy decision to finish his career at CSUSM.

“I did consider other schools, but the coaches didn’t understand me the way Coach Foster did,” said Fuller, who is part Peruvian. “He understood that it wasn’t just about my mom and being closer to her during rough times, but rather about becoming a better man. Coach made it very easy for me by helping me with the things I needed.”

Fuller’s dad was his best friend. So watching his body succumb to cancer and the effects of chemotherapy left Fuller with a black hole-sized emptiness inside. That void was filled by his grandfather, who was too old for chemotherapy and died shortly after his diagnosis.

With the loss of two of the most important people in his life before the age of 22, Fuller has relied on not only his inner strength, but a strong support system of his mom, coaches and teammates.

“Although they have only known each other for a few months now, Khalil is pretty close with many of his teammates,” Foster said. “You’ll catch them hanging out off the court as well, which in turn helps Khalil and the team all together. Khalil is also very close with his mother and his brother Kyle Fuller (currently a pro in Brazil). They talk daily and his mother attends many of his home games and the local SoCal games.”

If leadership is an important trait in an athlete, perhaps Fuller’s greatest contribution to CSUSM is not how many times he puts the ball through the basket. Instead, what he has brought in less than a full year on campus is the portrait of a young man who is a shining example of grace under pressure. Of overcoming adversity by living life as an inspiration to others.

A comeback story that goes beyond wins and losses.

“I feel like I’m very strong because I’ve had to deal with all the tragedy that I have,” Fuller said. “My outlook on life is less about positivity and more about happiness, which comes off as positivity. After I lost my Dad, I was sad for years and I didn’t like the person I saw in the mirror so I had to change in order to keep living.”

Basketball Standout an Inspiration On and Off Court