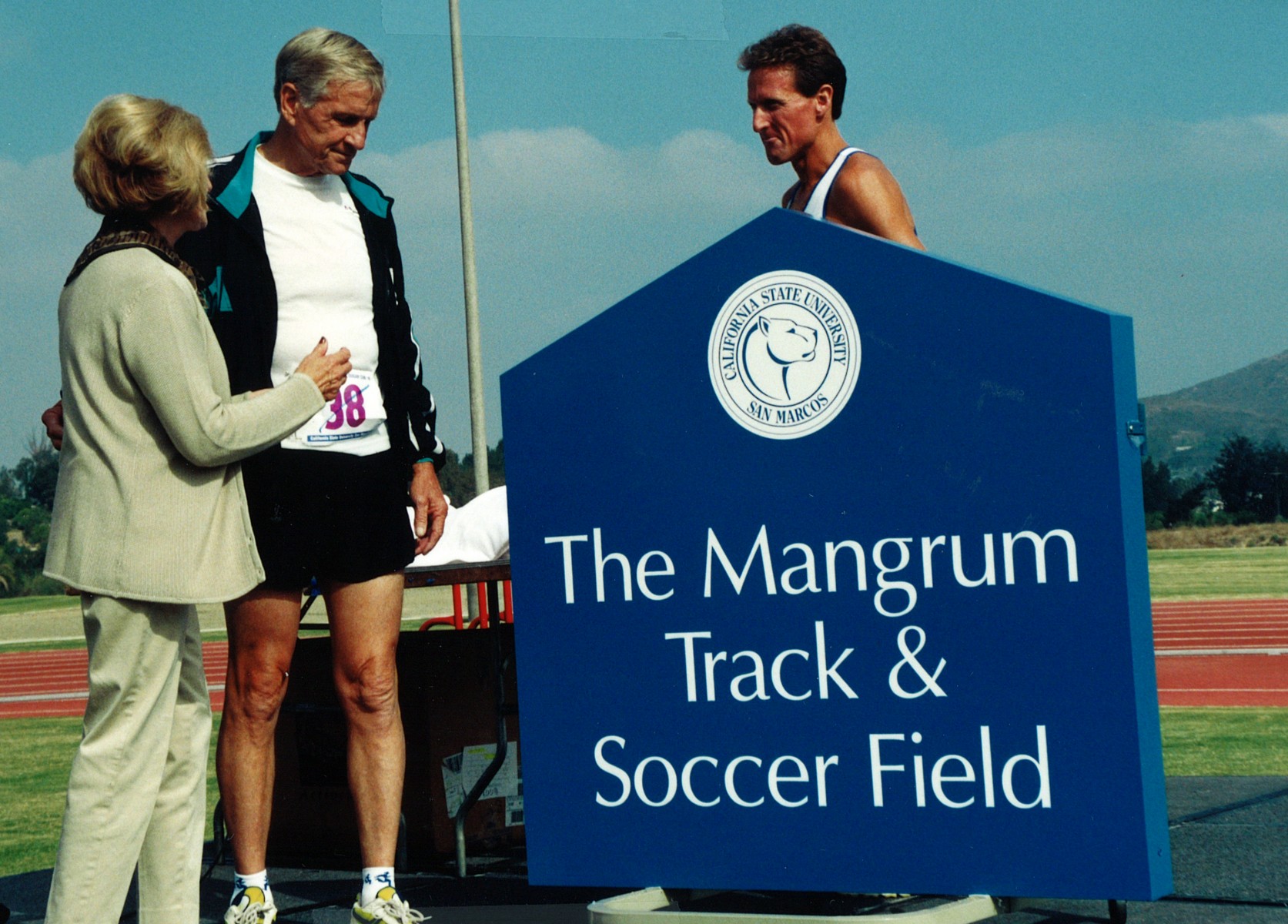 Bob and Ruth Mangrum join Steve Scott at the unveiling of the sign at The Mangrum Track & Soccer Field.

Bob Mangrum often told stories about the impact teachers had on his life.

Mangrum’s mother died when he was young, and he had a challenging upbringing in Oklahoma. He shared with his children, Trudy and Bill, that it wasn’t unusual for him to skip school to go fishing or hunting. When Bob returned after these absences, his teachers didn’t lecture him. Instead, they reinforced the importance of being in school and worked to get him back on track.

Bob Mangrum died on June 14 at the age of 87 having made a difference in the lives of countless youth across the region.

“The world lost just a complete human being,” said Steve Scott, who retired in 2018 after nearly two decades as CSUSM’s cross country and track and field coach. “He was a class act and incredibly generous – not just to Cal State San Marcos but elementary and high schools in the area. He was just a wonderful human.”

From CSUSM’s earliest days, Bob and his wife, Ruth, provided support to help the university grow and become a beacon of higher education in the region. They were introduced to the university through their friendship with Bill Stacy, the university’s founding president, and his wife, Sue. Their connection continued to deepen under the leadership of CSUSM’s second president, Alex Gonzalez.

The Mangrums’ support included not only helping to establish an athletics program at CSUSM but ensuring the department’s survival during difficult economic times.

“It’s not an exaggeration to say that we certainly wouldn't have the athletic program we have today without Bob,” said Steve Nichols, a political science professor and the athletic director from 2004-09. “And we might not have any athletic program today had it not been for Bob, because he and Ruth were instrumental in sustaining us.”

CSUSM’s athletics department was founded in 1998 with golf, cross country, and track and field programs. The university was able to quickly build a home for track thanks to the generosity of the Mangrums.

Bob Mangrum also was responsible for bringing Scott, a legend in the track world, to the university. It was a hire that gave instant credibility to a fledgling athletics program.

Scott was scheduled to attend a groundbreaking for CSUSM’s track in the late 1990s, but missed the event because of a family emergency. To make up for missing it, Scott went to Mangrum’s house and they went for a run together. As they were chatting after the run, Mangrum asked if Scott knew anyone who might be interested in coaching the new CSUSM cross country and track teams. To Mangrum’s surprise, Scott said he would be interested. A month later, CSUSM had a two-time Olympian as a head coach.

“Bob was totally responsible for, really, my future, my happiness, my financial well-being,” Scott said. “I was just going nowhere where I was. God put Bob in my life for a reason, and I was able to influence hundreds and hundreds of kids and motivate them and give them direction and goals, and it was all because of Bob and Ruth.”

Mangrum’s generosity went beyond simply writing a check. When Scott wanted to host a cross country race on campus, he asked Mangrum, who owned a construction business, if Mangrum had a small Bobcat they could use to plow a trail. Scott was shocked when Mangrum showed up with a giant tractor, fill dirt and a crew to help create the course. When the program needed to move a discus ring, Mangrum took care of it. When the women’s cross country team won national titles from 2009-11, Mangrum purchased championship rings for the student-athletes.

The Mangrums also provided much-needed scholarship funds, and student-athletes who earn a 4.0 grade-point average are annually honored with the Mangrum Award for Academic Excellence.

“We didn't have much of an operating budget, didn't have much in scholarships, and every little bit that we got helped,” Scott said. “Winning the championships was all due to Bob and Ruth, because you can't get good athletes without scholarship money. That's key to a championship program. With the money they provided, I was able to get some very good student-athletes.”

Bill Mangrum said Trudy and he are proud that the track their parents made possible isn’t just for student-athletes but a place for the entire campus community.

Bob Mangrum was an outstanding athlete in his own right. He competed in races across the country, including iconic events like the Boston and New York City marathons.

Long before Nichols was recruited to serve as athletic director, Ernest and Leslie Zomalt, who worked at the university in the 1990s and later established an endowment to recognize contributions made by CSUSM staff and administrators, kept telling Nichols that he needed to meet Mangrum. An avid runner himself, Nichols finally met Mangrum for a run after months of putting off the Zomalts’ request.

“He’s got to be 25 years older than me,” Nichols said, “and he ran me into the ground. That was my first meeting with Bob.”

Their relationship expanded when Nichols later became the university’s AD, and he credits Mangrum for keeping the department afloat at a difficult time.

“Athletics was very much just dying on the vine, and without Bob and his support during that time, I don't think we would have survived,” Nichols said. “And these are the things that I can talk about. I probably only know a small fraction of what he actually did. He didn't like a lot of fanfare. He didn't do it for recognition. In addition to being one of the nicest, kindest people I've ever met, he was very humble.”

Mangrum remained a steadfast supporter of CSUSM throughout his life. From attending the annual president’s gala to the scholar-athlete luncheon, the Mangrums were frequent visitors to campus.

While the Mangrums’ philanthropy went well beyond athletics – among their numerous contributions was joining the de Jong family in making a reality what has become one of the most prominent landmarks on campus, the Academic Hall clock tower – Bob Mangrum continues to have a special place in the hearts of those in the department.

“Bob left an incredible imprint on CSUSM athletics,” said Jennifer Milo, athletic director since 2012. “We are so honored and fortunate to have known Bob and been the recipient of his love of running and our track and field programs. His legacy in CSUSM athletics will never be forgotten and will be celebrated and recognized always.”

About a decade ago, Steve Wagner helped establish a professional mentor program through the College of Business Administration at Cal State San Marcos. It was the latest of many ties that bind the …
Read more

Steve Wagner, the president and co-founder of Stone Brewing, and his wife, Laura, have given $1 million to Cal State San Marcos to establish funding to support social mobility, one of the core tenets …
Read more
NewsCenter