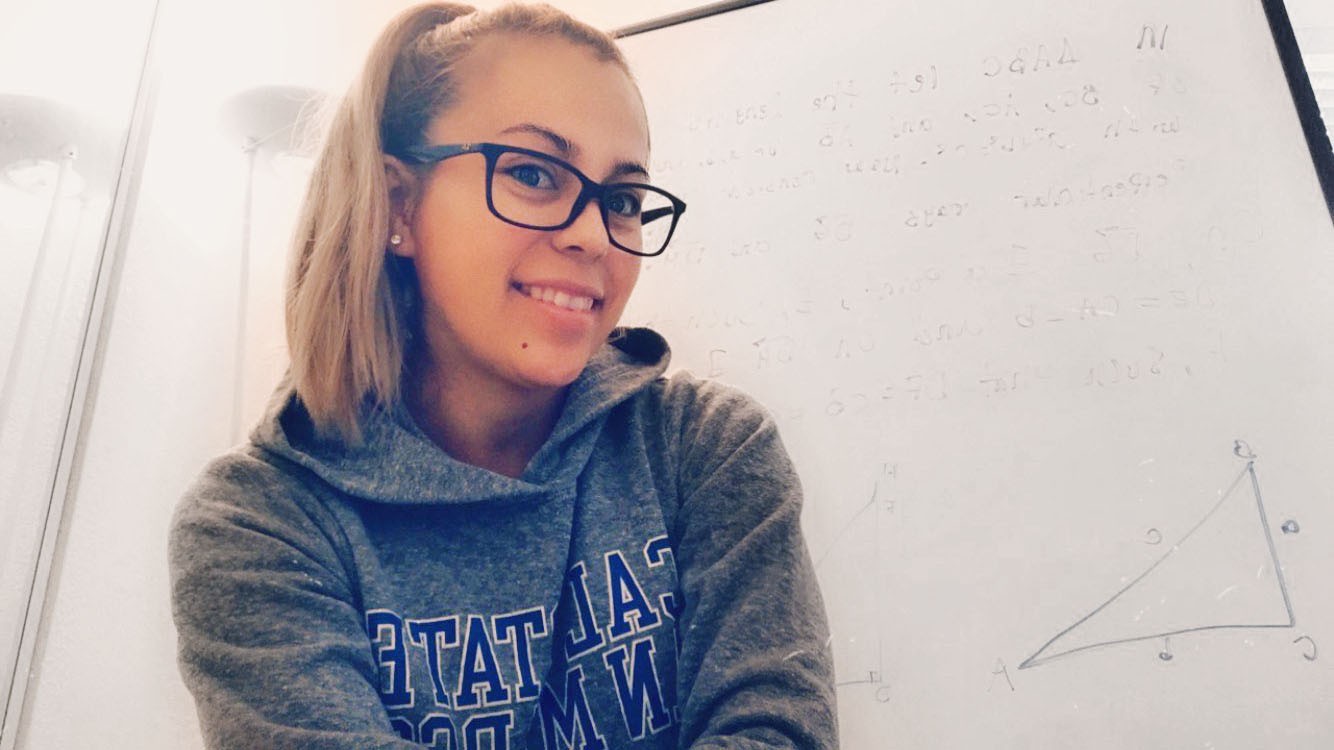 Marlene Salazar, who dropped out of high school after her sophomore year to help support her family, will graduate in December with a bachelor's in mathematics.

Marlene Salazar puts air quotes around the word “friends” when describing the people who tried to dissuade her from pursuing an education.

Some told her she was too old. Others said her focus should be on having kids, not school.

“I lost a lot of my ‘friends’ because they used to laugh about me, make jokes and all that,” Salazar said. “But now look at me. I'm almost done.”

Salazar, who dropped out of high school after her sophomore year to help support her family, is almost done with her undergraduate studies. A mathematics major, she needs to complete just two more classes at Cal State San Marcos this fall to become the first person in her family to earn a college degree as she continues working toward her goal of becoming a high school math teacher.

“I truly admire her resiliency and determination,” said Marylou Gonzalez, Salazar’s retention counselor in CSUSM’s Educational Opportunity Program (EOP). “There were times and situations that truly tested her, but her desire was much stronger.”

A few weeks ago, Salazar was joking with her husband, Marcelo, about how most people take 8-10 years to earn a Ph.D. while she was taking that amount of time to obtain her bachelor’s. In Salazar’s case, that decade also included obtaining her GED, completing ESL classes and earning her associate degree at Mesa College.

It has been a remarkable journey, from leaving Mexico for the promise of a brighter future after the death of her father to sleeping in Los Angeles bus stops to dropping out of high school to help her family. But even when she was spending those years working to help her family survive, she never gave up her dream of an education.

It wasn’t until eight years after dropping out of high school that Salazar, then 24, enrolled in night school to obtain her GED. But, for her, there was never any doubt.

Salazar’s father died when she was 12 and a family dispute over ownership of their Tijuana home ended with her on the streets with her mother and two younger siblings. The family found shelter with a relative, but the ongoing financial struggle led her mother to move the family to San Francisco to stay with an uncle.

It was another short-lived arrangement. When the property owner where Salazar’s uncle lived learned about the four additional tenants, they were forced to leave. Unable to afford housing in the Bay Area, Salazar’s mother moved the family to Los Angeles. There, they spent days on the streets and rationed a few hundred dollars that her uncle gave them for cheap motel rooms at night. When her mom got a cleaning job at night, Salazar and her siblings were left to fend for themselves until their mother returned from work.

“It was really scary because it was not a nice area,” she said. “It was only us, three kids in a motel.”

Salazar’s mom eventually found a second job, and the extra income helped them rent a garage, cramped quarters where they lived for nearly five years.

“It was a garage, but we were so happy,” Salazar said.

While finally having a permanent address meant Salazar and her siblings could enroll in school, financial pressures weighed on the family.

Salazar tried to help by selling candy to her high school classmates, but she didn’t make much money and she got in trouble with teachers for her efforts.

“They didn’t understand that if I was selling candies, it was for a reason,” she said. “It was because I really wanted to stay in school and I really needed the money.

“It was not enough so I ended up dropping out of high school. I was so sad.”

Salazar found work as a clothing salesperson, and she continued working when she enrolled in night school to get her GED.

Though she wanted to continue her education after completing her GED in 2012, college seemed out of reach. Despite living in the U.S. for 10 years, she didn’t qualify for in-state tuition as an undocumented student. It wasn’t until she applied for Deferred Action for Childhood Arrivals, more commonly known as DACA, that she could afford to enroll in college.

Salazar and Marcelo had been married for about three years at this point, and they moved from Los Angeles to San Diego so he could enroll in a program at Mesa College. He encouraged Salazar to pursue her college dreams, too.

Salazar completed her general education requirements at Mesa and enrolled at CSUSM in 2018, about the same time that she received her green card. She met Gonzalez through the EOP Transfer Bridge program, which assists students transitioning from community college to a university setting.

“I knew right away she was motivated, determined and a go-getter,” Gonzalez said. “She quickly connected with EOP and made sure she asked questions to help her get ahead. In our meetings, she allowed herself to be vulnerable and expressed her fears and always followed up by saying, ‘I’m getting it done. One way or another, I am getting it done.’ ”

Salazar said many people assume math just comes easy to her and don’t realize the time and effort she puts into her studies. Math professor Amber Puha saw Salazar’s dedication for herself when Salazar took Puha’s Math 441 Introduction to Mathematical Probability course in 2019.

“She brought enthusiasm and a bright personality to class and office hours every week,” Puha said. “Her positive vibe is infectious. And because of that, I would have never guessed the circumstances that she has endured and overcome to get where she is now.”

Salazar told Puha about her plans to become a high school math teacher. She wants to help other students, especially migrants, avoid the difficulties she faced.

“She has chosen to use smarts, resilience, determination, forgiveness and open-mindedness to find her way to a life where she can do mathematics and help others,” Puha said. “This may sound a bit cliché, but it is far easier said than done when life beats you down and you are your only support network. She is an inspiration, and we are fortunate that she will continue in mathematics and become a role model for her future students.”