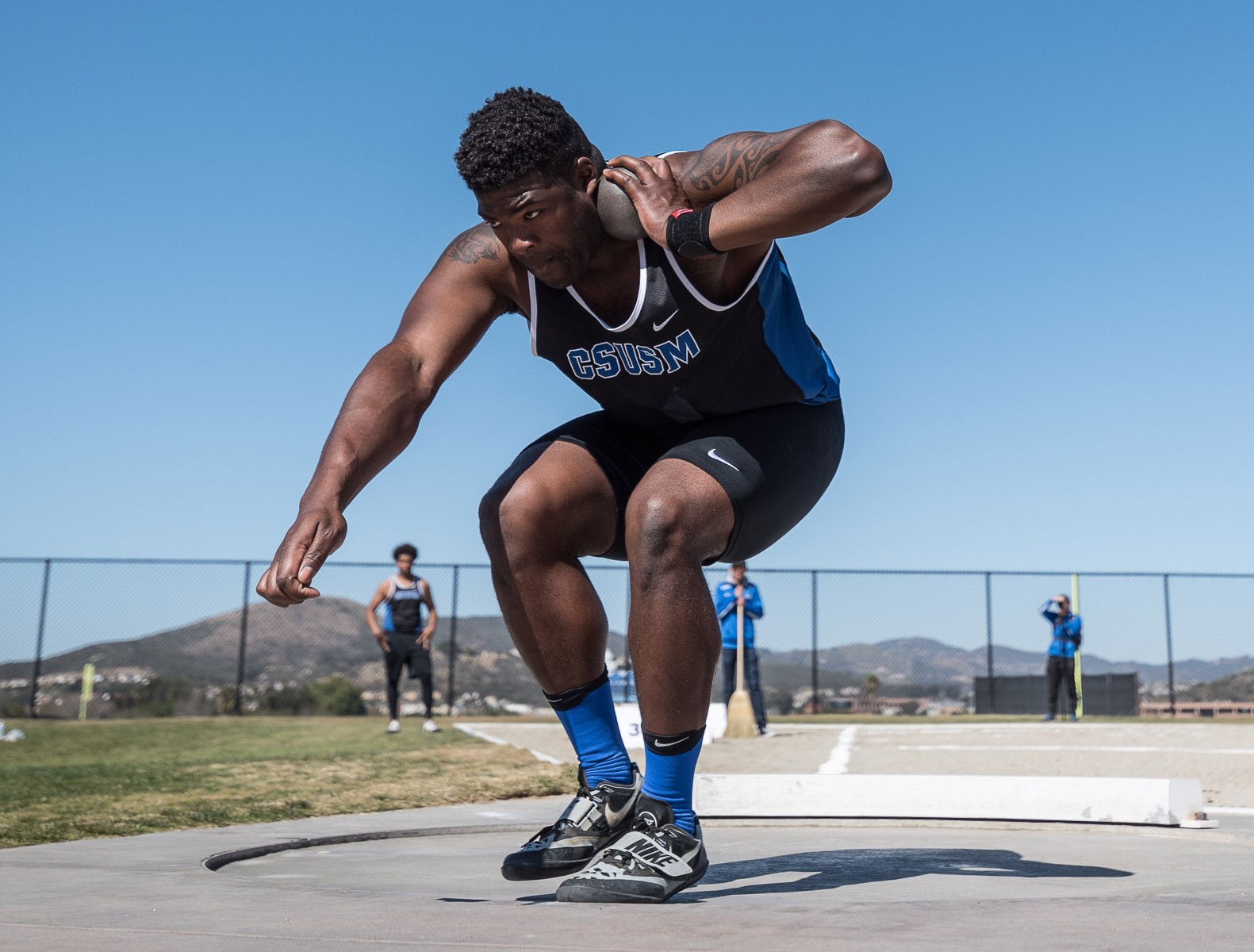 Jason Jackson was running late, thanks to the area’s weekend traffic that any local can verify.

“I didn’t think I was going to make it, but I did,” said Jackson, a Cal State San Marcos track and field coach. “When I got into the stadium, I walked around the corner toward the ring and we made eye contact. He gave me a nod.”

The reassuring bop of Ndoto Strong’s noggin was all Jackson needed.

“I never want to let my coach or my team down,” said Strong, a CSUSM junior.

What came next on Strong’s final throw didn’t surprise Jackson at the recent Aztec Invitational, which was spread over two San Diego college campuses.

“There is never a doubt he is going to do what he needs to do,” Jackson said, “because he puts in the work.”

The 6-foot-5, 284-pound Strong flexed his considerable muscles and heaved the shot put 16.75 meters to set a CSUSM standard. It also gave Strong his third NCAA provisional qualifying mark of the season as he continues to rewrite the Cougars’ record book for throws.

“He’s also a beast in the weight room,” Jackson said. “If we kept a record book in there, he would have destroyed it.”

One glance at the menacing Strong brings with it two reactions: he’s big enough to block out the sun and built in a manner that causes college football coaches to salivate.

“I played football in high school but I tore up my ACL,” Strong said of a knee ligament. “So I didn’t want to play anymore.”

Instead he turned to track and field after growing up in rural Washington. It was on a farm where his family raised llamas that Strong learned the meaning of hard work and hard knocks.

“For me, it’s all about the team and doing my job.”

While Strong was a standout in sports he struggled in the classroom. A learning disorder meant he had to read book passages “three or four times,” he said, before comprehending the subject.

“It’s hard, not easy,” said Strong, whose disarming smile is as welcoming as it is bright.

With his academic challenges, classmates often looked at Strong askew. And when they saw his special-needs sister, the blowback couldn’t be ignored.

What they didn’t know was a cherished lesson the wise Strong learned early.

“If you have a family member that has a disability, that can actually make you a better person,” Strong said. “It can make you more compassionate toward people. It can make you relate to people and their feelings.”

Strong, who like his sister was adopted, could hear and sense the ridicule behind his back and it never left him. Now he’s involved with San Diego Sibshop, a support group for siblings of those with disabilities.

“I didn’t have anyone to talk to and just kept it bottled up,” Strong said. “This group is a great idea to help these kids. I don't want them to lash out at people and cause more problems for the family. I can be their teacher.”

Strong, a psychology major, also tells of wrestling with academics, needing to assert twice the effort to produce similar results to other students. Instead of rolling around in pity, Strong rolled up his sleeves.

“That is what is most impressive about him,” Jackson said. “He has to put in so much extra time to maintain his athletic eligibility.

“He works with a mentor and has a definite regimen he follows when he does his homework and studies. There is a lot of work he does behind the scenes so he is able to be in athletics.”

Strong’s relationship with Jackson has a foundation. After Strong moved to California he enrolled at San Diego Mesa College. Eager to continue in sports, minus football, he went out for track and field where he met Jackson.

When Strong heaved the shot put for Jackson, it was clear he had potential. When putting air under a discus, it was clear Strong had no clue.

Enter Jackson’s plan for action: Strong competes in both throwing events, although he had thrown a Frisbee disc more than a discus.

“I taught him the discus from scratch, which at the college level is unheard of,” Jackson said. “It took a long time and he was coming off a pretty severe knee injury. It was difficult, to say the least. But he put in the work and it could end up being the better of his two events. He is really close to a big throw.”

Everyone is close to Strong. He’s a motivator for teammates. He serves as an inspiration to classmates. He contributes to the community by leading youngsters facing challenges similar to his.

“No one should be judged just because of the way they look or act,” Strong said. “I always tell them that I will be there for you no matter what.”

He’s a rock, and that doesn’t go unnoticed. Jackson left San Diego Mesa after Strong received his two-year diploma, but not before presenting Strong as a role model.

“He’s the first one here and the last one to leave, but more than anything else he cares about his teammates,” Jackson said. “He’s a special kid in so many aspects of his life in that he’s overcome a lot to get where he’s at. But you never hear him complain because he is just a positive guy.”

Jackson was certain he had seen the last of Strong after their parting at San Diego Mesa. CSUSM head coach Steve Scott asked Jackson to join the Cougars’ staff and Strong was bound for Western State College in Colorado.

Then word came that Strong was shy a class to transfer. In an academic mix-up not of his own doing, Strong’s admission to Western State was rescinded.

Jackson got wind of that and pounced in the name of CSUSM.

“When I heard he was available I didn’t hesitate contacting him because he is definitely one of my favorite athletes that I had ever coached,” Jackson said. “When he left San Diego Mesa I gave a speech about him because he lives and dies for his teammates.”

Strong shows his strength in many ways. His love and caring of those around him equals what he displays by tossing shot puts, discuses or hoisting weights others can’t budge.

“For me, it’s all about the team and doing my job,” Strong said.

In and out of the throwing ring, it’s a job well done.