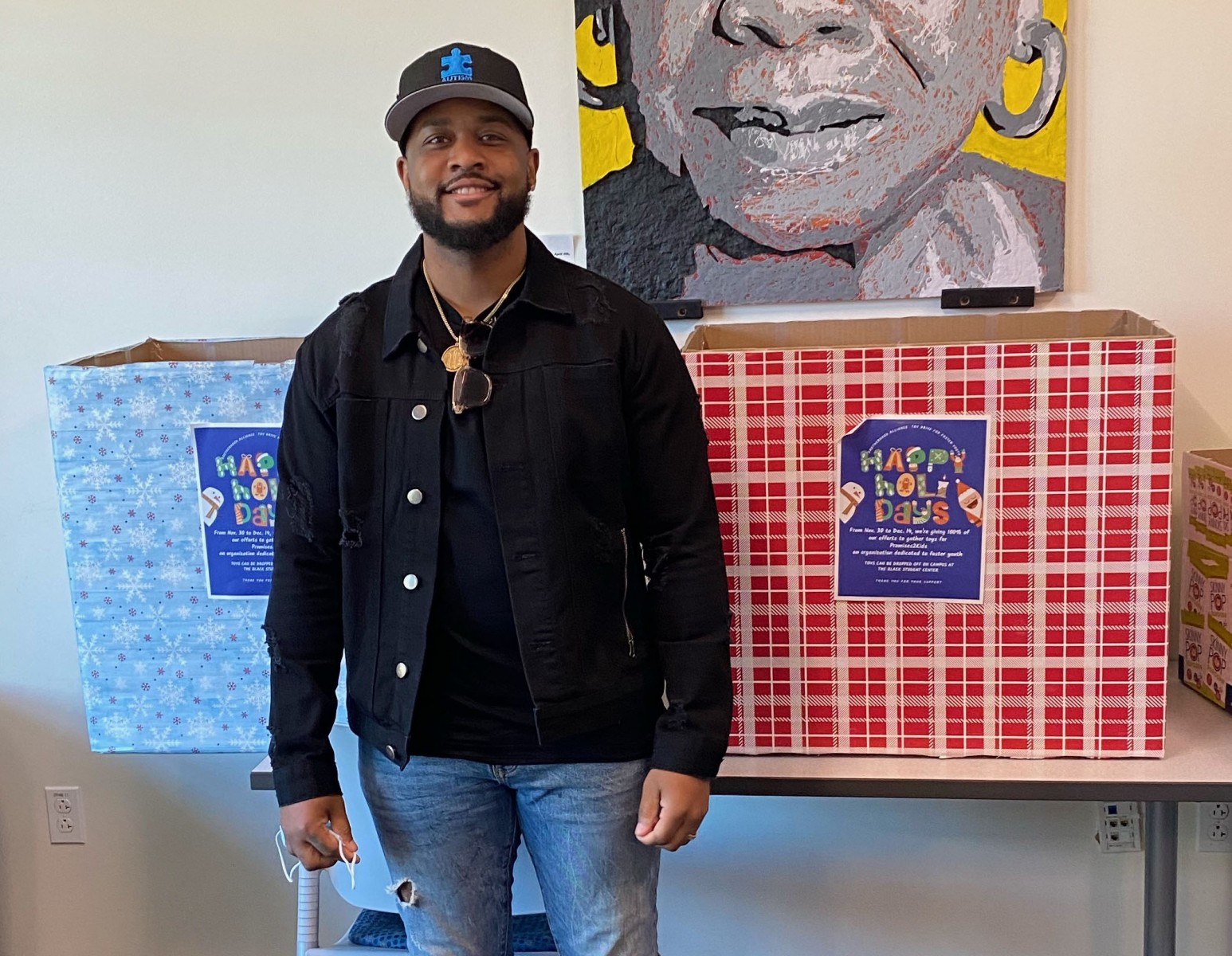 CSUSM student John Edwards stands in front of two of the boxes he set up in the Black Student Center for a holiday toy drive. Along with other boxes around the county, Edwards collected hundreds of toys for local foster youth.

When he transferred to Cal State San Marcos from Grossmont College in August, John W. Edwards III had no idea what service learning was.

Even when he was exposed to the concept early in his EDUC 364 course, he understood it mainly as a 20-hour requirement to complete the class. But the experience of tutoring foster youth as part of his service learning project affected Edwards deeply, so much so that he’s bringing a decided spirit of giving to the holiday season.

Edwards this month organized a toy drive with the student organization Brotherhood Alliance through the Black Student Center that netted 322 toys that will become Christmas gifts for local foster kids. If that weren’t enough, he also raised hundreds of dollars for a San Diego nonprofit that helps former foster kids transition to independent living.

“I just thought, ‘It’s the holidays and there are so many kids in the foster system who are going without and who just want to get a sense of what it feels like to have Christmas or be supported through their journey of being in foster youth,’ ” Edwards said. “So I took it upon myself to go a little farther and do these acts to demonstrate that we can all be the change that we want to see in terms of helping foster kids.”

Edwards embarked on the service learning project in a course taught by School of Education lecturer Sherry Freeborn called “The Role of Cultural Diversity in Schooling.” In that class and other education prerequisites like it, CSUSM partners with a program called Tutor Connection run by Michelle Bailow, who works in foster youth services for the San Diego County Office of Education.

After teaching students about the effects of trauma and the ins and outs of the child welfare system, Bailow matches them with a foster youth from somewhere in the county for 20 hours of tutoring supervised by her.

Edwards met for two hours every Monday with a seventh-grade foster youth who has special needs. Assuming at the outset that the sessions would revolve around classwork and other educational problems, Edwards soon discovered that was not the case.

“When I started talking with the kid, it became clear that he just needed a friend, someone to lift him up a little bit,” Edwards said. “That's what I began to do, and that's what got me thinking about the fundraisers that I have been participating in.”

In addition to organizing the toy drive, John Edwards also raised $600 for a nonprofit that helps foster youth transition to independent living.
A room is filled with the hundreds of toys that Edwards helped collect for the local agency Promises2Kids.

Edwards derived so much inspiration from his weekly tutoring meetings that he volunteered to be paired with a second foster youth as well. And when he approached Bailow with his desire to do even more for the holidays, Bailow connected him with two local agencies.

Promises2Kids, founded in 1981, is a San Diego nonprofit that annually supports more than 3,000 current and former foster youth in the county, and each December it holds the “Give from Your Heart” toy drive. In concert with the Brotherhood Alliance, Edwards stationed two drop-off boxes in the Black Student Center and several more at various locations around the county. Last week, he picked up the hundreds of toys and delivered them to Promises2Kids for distribution before Christmas.

At the same time, Edwards worked with Just in Time for Foster Youth, specifically its My First Home program, which assists former foster youth in furnishing their new apartments as they exit the system and begin to live on their own. Edwards visited all of the EDUC 364 classes to present his fundraising plan and ask students to chip in up to $5. He and his friends in the Brotherhood Alliance then teamed up to match what the students gave, which amounted to a total of $600.

Bailow has been a community partner of CSUSM for about 15 years, and she said Edwards’ level of initiative and generosity is rare in her experience.

“I have phenomenal students who are dedicated to their kids and become mentors,” Bailow said. “But the fact that he took on all this on his own because this class had such an impact on him and that he wanted to give back and do something special for kids in the foster care system, he definitely stands out as one of the shining stars from all my years of doing this.”

Edwards is on track to graduate in May 2023 with a degree in psychology. At 31, he also just became a licensed barber, having recently completed the required 1,500 hours of training and passed the California state exam. His career ambition is to fuse his two interests, bettering his clients’ mental state while cutting and styling their hair.

“A lot of men won't go and talk to a therapist, but they'll talk to their barber,” he said. “I also hope to continue to partner with Michelle and offer my service for free to foster youth who need haircuts. I want to use that skill of cutting hair to support my education and to tie it in with everything else that I do.”