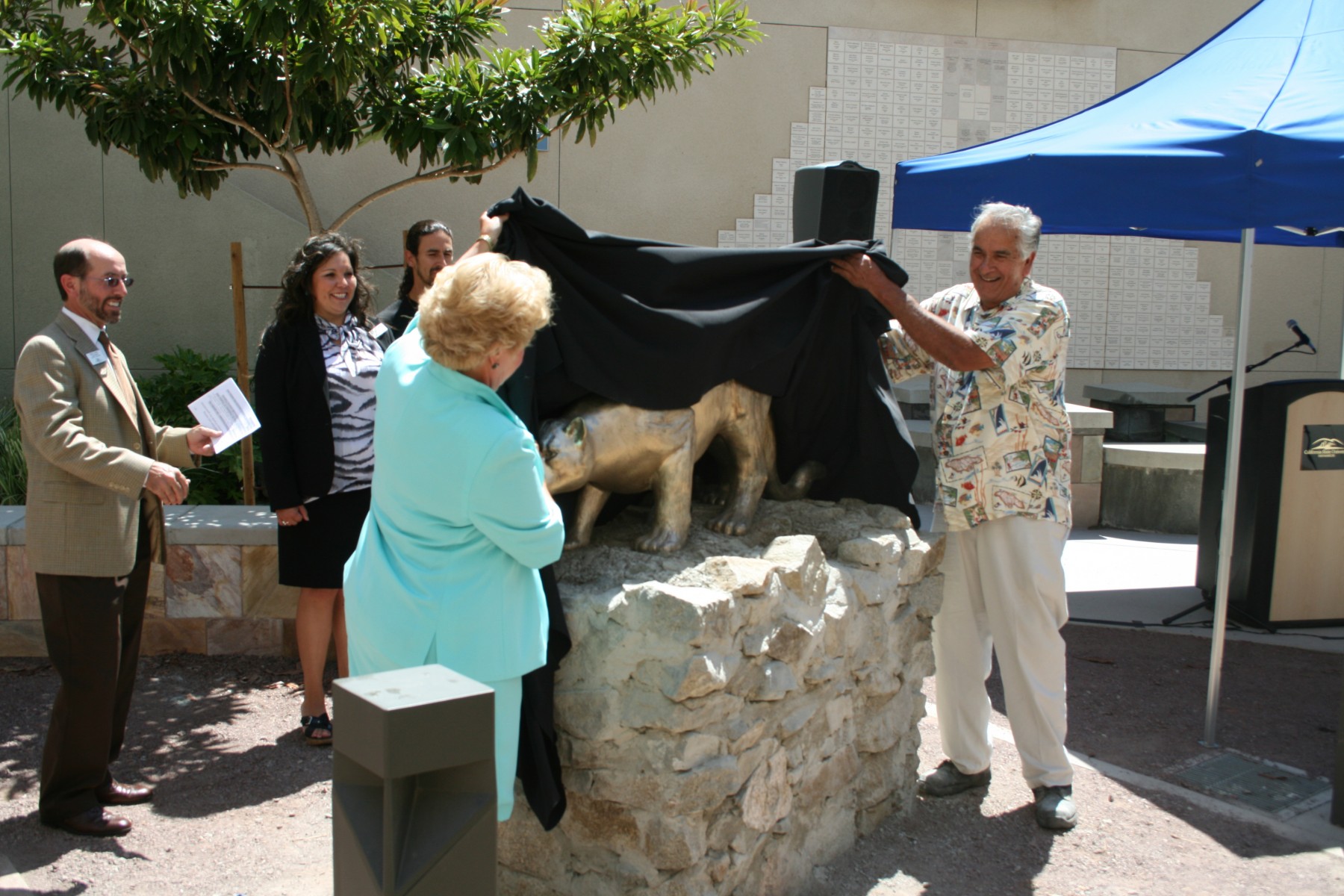 The life-size bronze cougar statue that adorns the third-floor courtyard of Craven Hall has become one of the most recognizable symbols on the Cal State San Marcos campus. Titled “Tukwut,” it represents both the mascot of the university and the Luiseño name for mountain lion, a nod to the American Indians who once lived on the land where CSUSM was built.

The statue, along with the large, multicolored piece that greets visitors as they drive up to the main circle, is the work of Robert Freeman, one of the most acclaimed American Indian artists in the nation.

Freeman died on Feb. 9 in La Jolla of complications after major surgery. He was 80.

“Robert was such a wonderful, multifaceted and talented human being,” Edwina Freeman, his wife of 58 years, wrote in a tribute on Facebook. “His humor, creativity, leadership and talent will be greatly missed. And above all, his friendship and loving presence to his family will bring tears to our heart and eyes along with much laughter for the rest of our lives.”

CSUSM commissioned Freeman, who lived in San Marcos, to create a sculpture of its mascot in 2007, and it was unveiled the following September during a ceremony in the newly christened Tukwut Courtyard. Only a few weeks earlier, the university held a dedication for “Focus,” the 14-foot, free-form, rainbow-colored sculpture by Freeman that sits to the north of the entrance to Craven Circle.

Asked what the piece represents, Freeman said at the time: “Everything in mainstream culture calls for logic, meaning, purpose and precision. But this is beyond that. There’s no message here. I’m not trying to say anything. I’d like everyone to interpret it in their own way.”

More than a decade later, both sculptures are widely regarded as indelible to CSUSM.

“He left our campus with everlasting artwork, with two amazing pieces for eternal viewing,” said Joely Proudfit, the chair of CSUSM’s American Indian Studies department. “Robert was a brilliantly gifted artist who was always willing to share his talents with anyone who asked.” 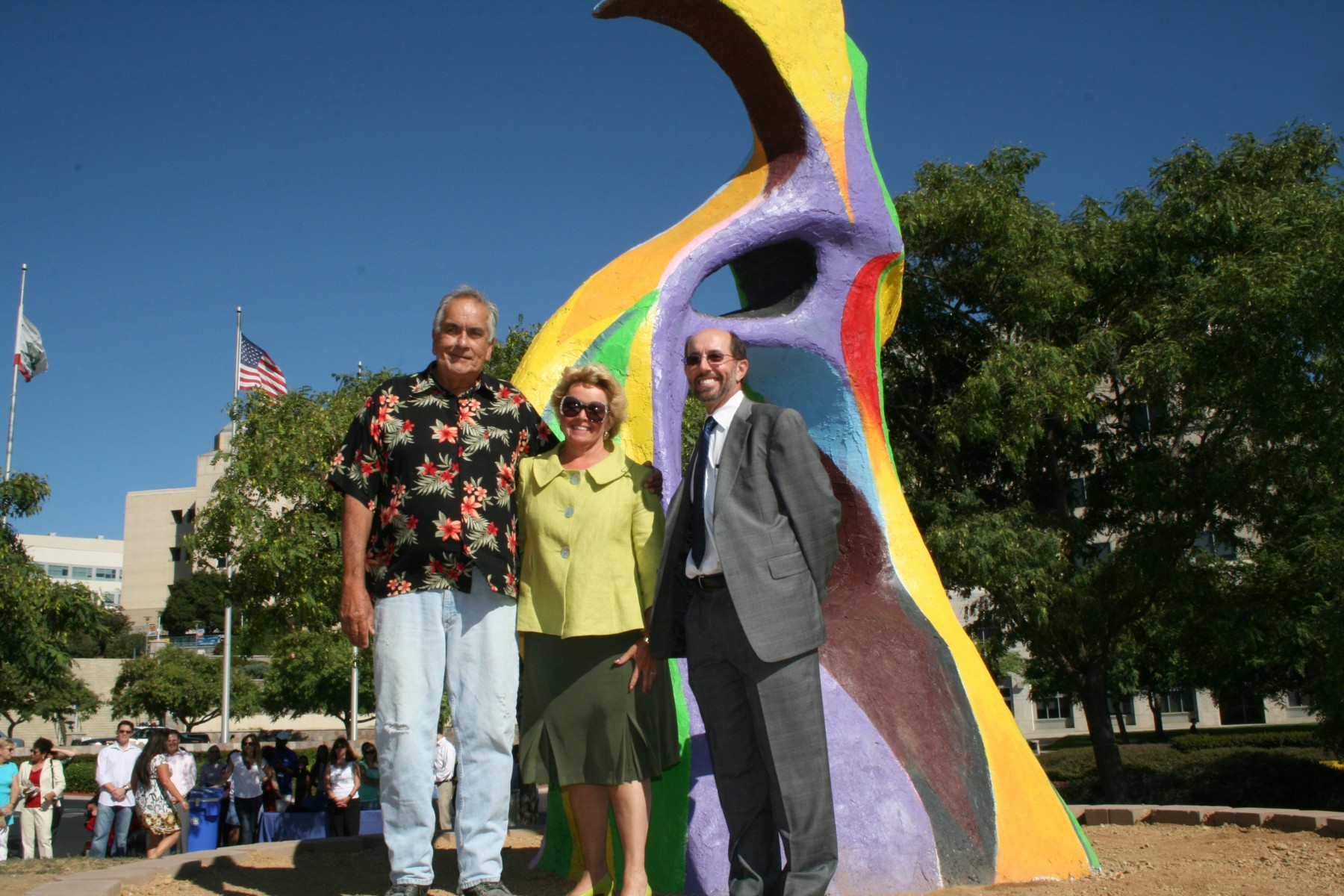 Robert Freeman
The artist (left) poses in front of his statue titled "Focus" with President Karen Haynes and Neal Hoss, then vice president of University Advancement, at a dedication ceremony in August 2008.

Proudfit, who said she knew Freeman for most of her adult life, used to joke with him that CSUSM needed a full pride of Tukwut sculptures on campus to show that it takes a whole family to help a student get through college.

“He laughed and said he would do it when I could raise the funds,” Proudfit recalled. “The Tukwut sculpture is beloved by all past and current students.”

Freeman was born on the Rincon Indian Reservation in 1939. His father was a Luiseño Indian, and his mother was Sioux, from the Crow Creek reservation in South Dakota. When he was 11, his mother settled in Escondido, where he grew up and attended high school.

Freeman spent three years in the Army in the late 1950s, and in 1967 he decided to become a professional artist. Self-taught, he worked in an array of mediums and styles, such as pencil, pen, ink, acrylic, mixed media, oils and sculptures of wood, stone and bronze. By the 1990s, he had won more than 200 awards and had his art exhibited throughout the United States as well as in Mexico, Canada, Germany, Japan, Senegal and Vatican City.

The sculptures at CSUSM are not Freeman’s only public art. In 2002, he was commissioned to design the California Indian Commemorative Seal outside the state Capitol building in Sacramento. In 2006 in San Juan Capistrano, he created the first historical life-size bronze sculpture in California honoring an American Indian woman. He also painted murals on the walls of the Los Angeles County Library in San Gabriel and the Ya’i Heki’ Regional Indian Museum in Perris.

Besides his art, Freeman was a writer and cartoonist who published three books of American Indian humor: “For Indians Only” (1971), “War Whoops and All That Jazz” (1974) and “Rubber Arrows” (1989). Russell Means, a prominent Indian activist, called Freeman “the most important Native American artist of our time.”

“I am grateful to have known him, learned from him, share his enormous talent with our students,” said Proudfit, who taught his grandson, Austin, at CSUSM. “We hope to find a way to perpetually honor him and his contribution to our campus.”