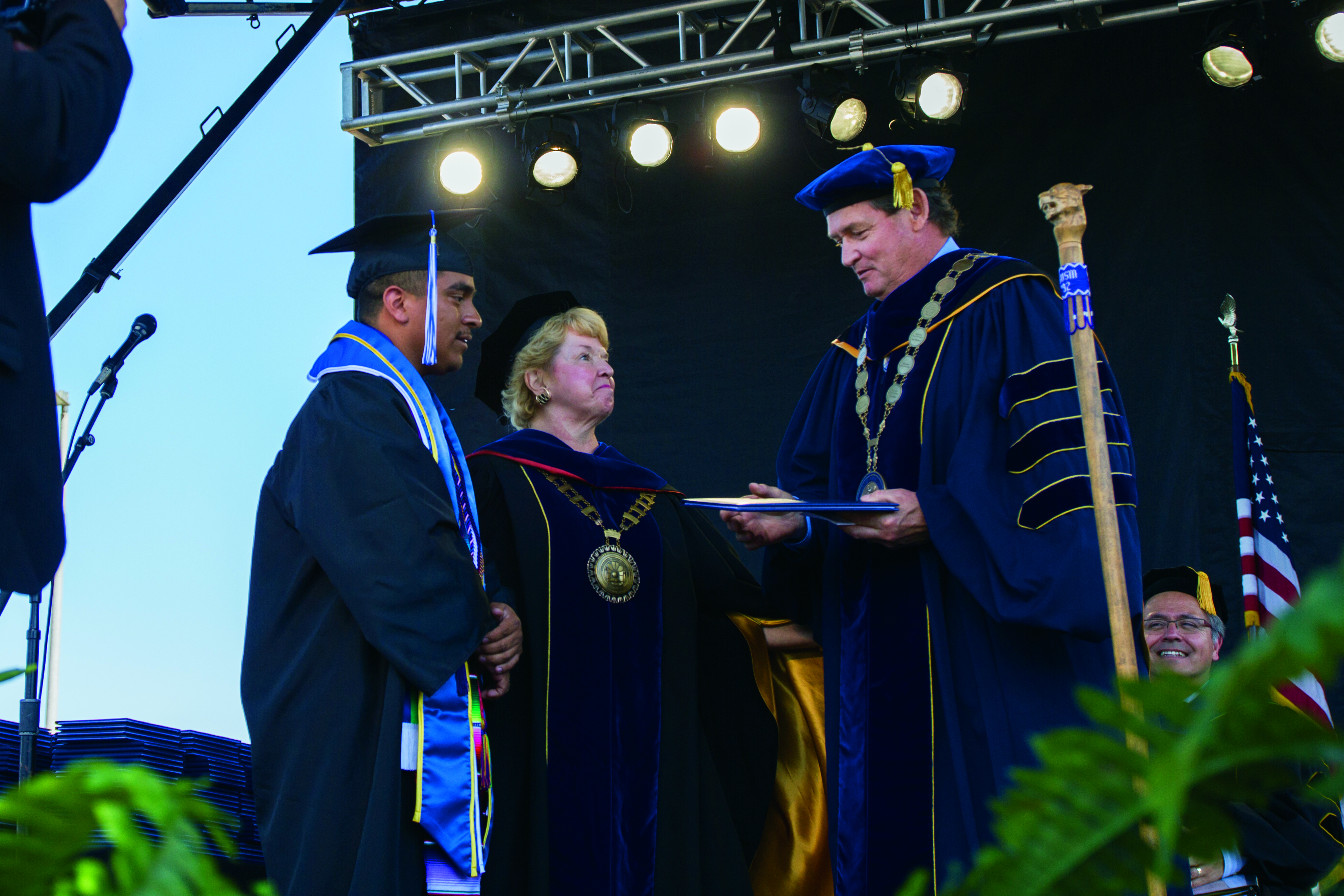 For the last two years, CSUSM’s Cipriano Vargas has crisscrossed California, juggling his academic responsibilities while visiting nearly all-23 California State University (CSU) campuses. As one of two student trustees appointed by Governor Jerry Brown, he has represented the voices, concerns and perspectives of the CSU’s nearly half a million students, and helped shape higher education policy for the largest public university system in the nation.

At the College of Humanities, Arts, Behavioral and Social Sciences graduation ceremony on May 25, CSU Chancellor Timothy White presented Cipriano, who majored in sociology and women's studies, with his degree.

“It was a precious moment that I will remember forever,” said Cipriano. “Chancellor White was a first-generation college student, as were others who were standing with me on the platform, including President Haynes, Provost Oberem and Vice President Meza. I have felt incredibly supported during my time at CSUSM and hope to be an inspiration for others who feel challenged to get into college or get through college.”

Since he arrived at CSUSM as a freshman, Cipriano has been involved in student leadership. His freshman year he participated in the College Assistance Migrant Program (CAMP). Then the following year he returned to CAMP as a peer mentor, helping students from farmworking family backgrounds acclimate to the rigors of college life. During the 2011-2012 academic year, Cipriano served as the chair of the University Student Union Advisory Board, volunteered as an Orientation Team member, helped organize the University's new Civility Campaign and held the position of social justice officer for Associated Students, Inc. (ASI).

In May 2012, students elected Cipriano to the position of vice president of external affairs for ASI. He is an alumnus of the Vista Future Farmers of America and a current member of CSUSM's Movimiento Estudiantil Chicano de Aztlán student organization.

Now the high-achieving student is headed to Texas to join other passionate college graduates as they teach low-income children through the non-profit Teach for America. Eventually Cipriano plans to continue his schooling and earn a law degree.

Seeking Participants for Research Study on Below-the-Knee Amputees
Attend an Open Forum for the Director of Veterans Services Search
Another Record-Breaking Giving Day
Psychology Professor Mentors Students in Cause of Fighting Effects of Smoking
Holiday Traditions Around the World on Dec. 2
Advocate Leaves Lasting Impact on Students