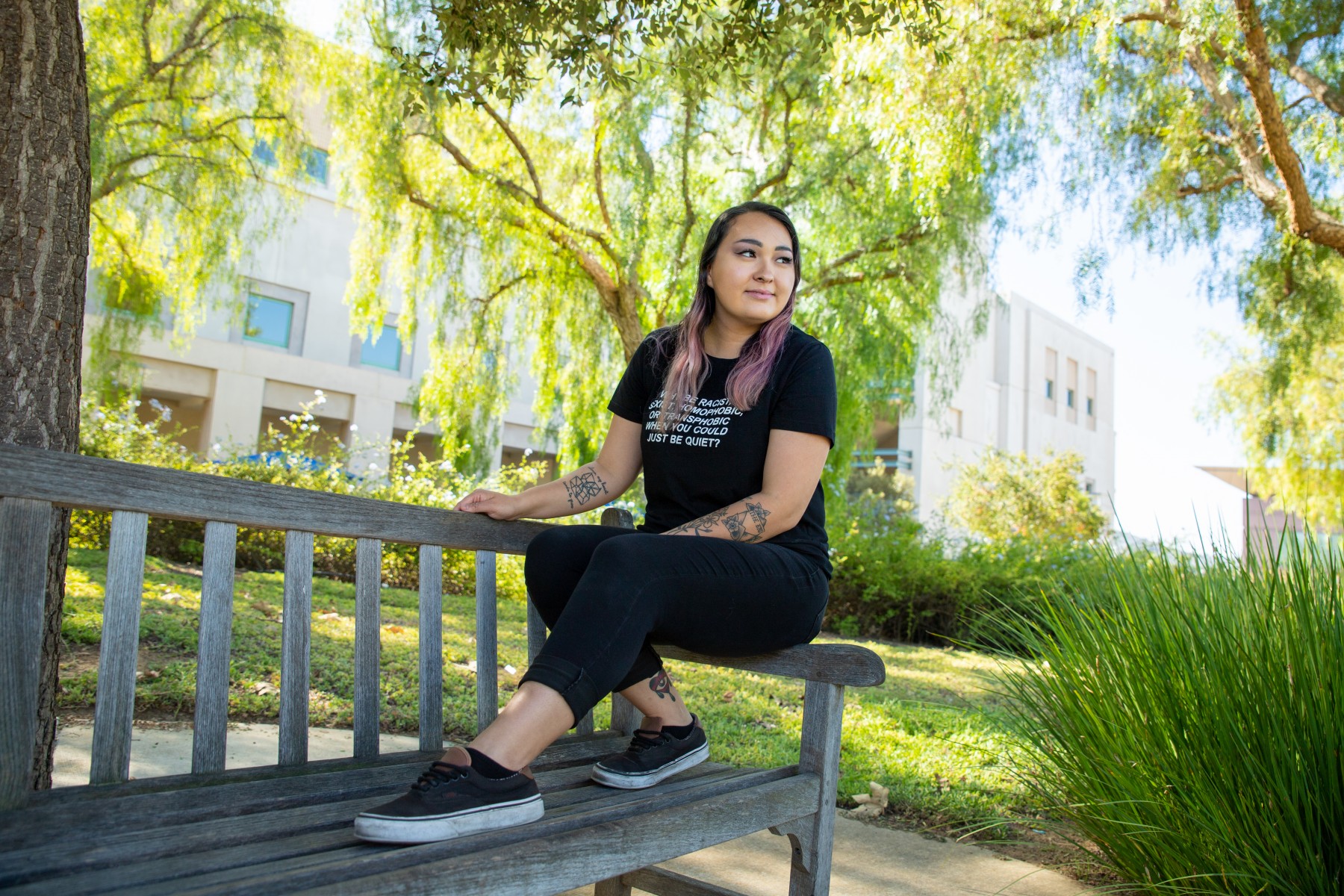 Megan Hammerschmidt is one of two recipients of the President's Student Champion Award for Inclusive Excellence and Diversity. Photo by Christine Vaughan

When Megan Hammerschmidt transferred to Cal State San Marcos from MiraCosta College for the fall 2018 semester, she wasn’t exactly looking for a rewarding campus life experience.

“I came here really not having any thoughts of doing anything other than my classes,” Hammerschmidt said. “I didn’t intend to get involved at all, just kind of get my degree and go.”

That attitude didn’t last long. In one of the first classes she took, Introduction to Environmental Studies, Hammerschmidt was assigned a service-learning project in the sustainability office, and she caught the bug of student engagement.

Now, despite being at CSUSM for only a little more than a year, Hammerschmidt has made such an impact that she has received the highest recognition for it. She is one of two winners of the President’s Student Champion Award for Inclusive Excellence and Diversity, which was presented by President Ellen Neufeldt during the All Peoples Luncheon on Thursday. The award honors students who both excel academically and make vital contributions to campus life and diversity and inclusion.

Hammerschmidt shared the award with Carla Jordan, who graduated last May with a degree in communication. Jordan held leadership positions in the Orientation Team, University Student Union and CSUSM Housing, and was a civility ambassador.

Born and raised in Utah, Hammerschmidt moved to North County after completing high school to stay with her father, who lives in Fallbrook. After five years at MiraCosta, where she struggled to find her academic path, she decided to transfer to CSUSM to pursue environmental studies. She was influenced by her grandfather, who earned a similar degree from UC Berkeley and worked in public health in Utah.

Right off the bat, Hammerschmidt found a welcoming home in the sustainability office. Under the direction of sustainability manager Juliana Goodlaw-Morris, she worked on social media projects and helped organize events.

“I got introduced to all the people who are already doing the work and I got along really well with them,” said Hammerschmidt, who will graduate in May. “And when I met Juliana, our personalities work really well together, and I think that her guidance has really helped me understand more.”

Through her classes as well as conversations with Goodlaw-Morris, Hammerschmidt was exposed to the concept – unfamiliar to her at the time – of environmental justice, which is defined as the fair treatment and meaningful involvement of all people regardless of race, color, national origin or income with respect to the development, implementation and enforcement of environmental laws, regulations and policies.

The idea was hammered home to her on a vacation last January to Thailand, where she encountered people who have no choice but to use plastic bottles because they lack access to clean water.

Upon her return, Hammerschmidt urged the sustainability program to partner with the Office of Inclusive Excellence to create an environmental justice internship. During the spring semester, she began to lay the foundation for what the internship would be, and this semester she’s officially serving as the first intern, working 10 hours a week and earning class credit.

In July, the internship won a best practice award at the California Higher Education Sustainability Conference.

“I’ve realized that a lot of people don’t know what environmental justice is,” Hammerschmidt said. “So the need is there to show how sustainability and inclusive excellence go together.”

As part of the internship, Hammerschmidt created a yard-sign project connecting the United Nations Sustainable Development Goals with CSUSM initiatives. For example, the goal of “Zero Hunger” was tied to the Cougar Pantry, “Quality Education” to the CSU Graduation Initiative 2025 and “Good Health and Well-being” to the Clear the Air smoke- and vapor-free campaign, for which she serves as a student advocate.

Hammerschmidt also is the director of sustainability for a new campus organization called the CSUSM Environmental Stewards Association. In that role, she helped organize the campus version of the Global Climate Strike last month, an event that drew more than 200 participants, including many from the surrounding community.

“She defies the traditional view that transfer students are not engaged with their university,” said environmental studies professor Gabriel Valle, who’s teaching Hammerschmidt in an environmental justice class this semester. “She is always working to create a culture of inclusion, diversity and social justice.” 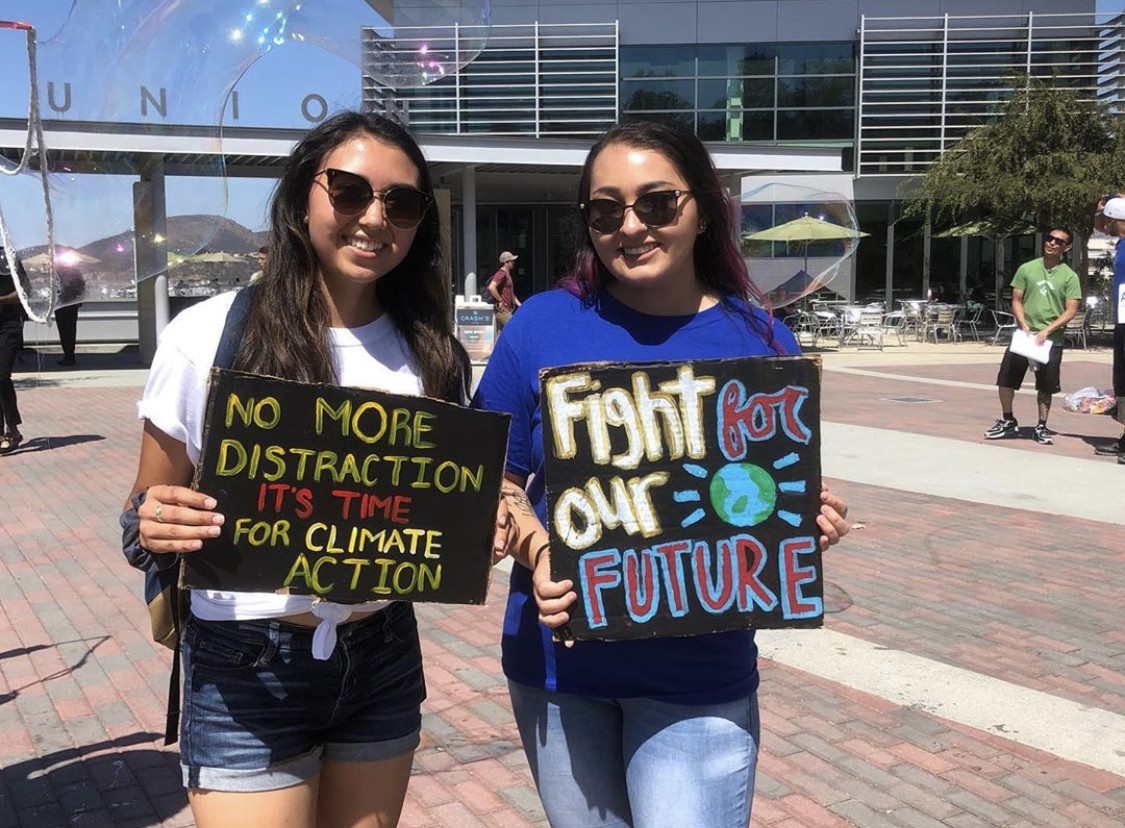