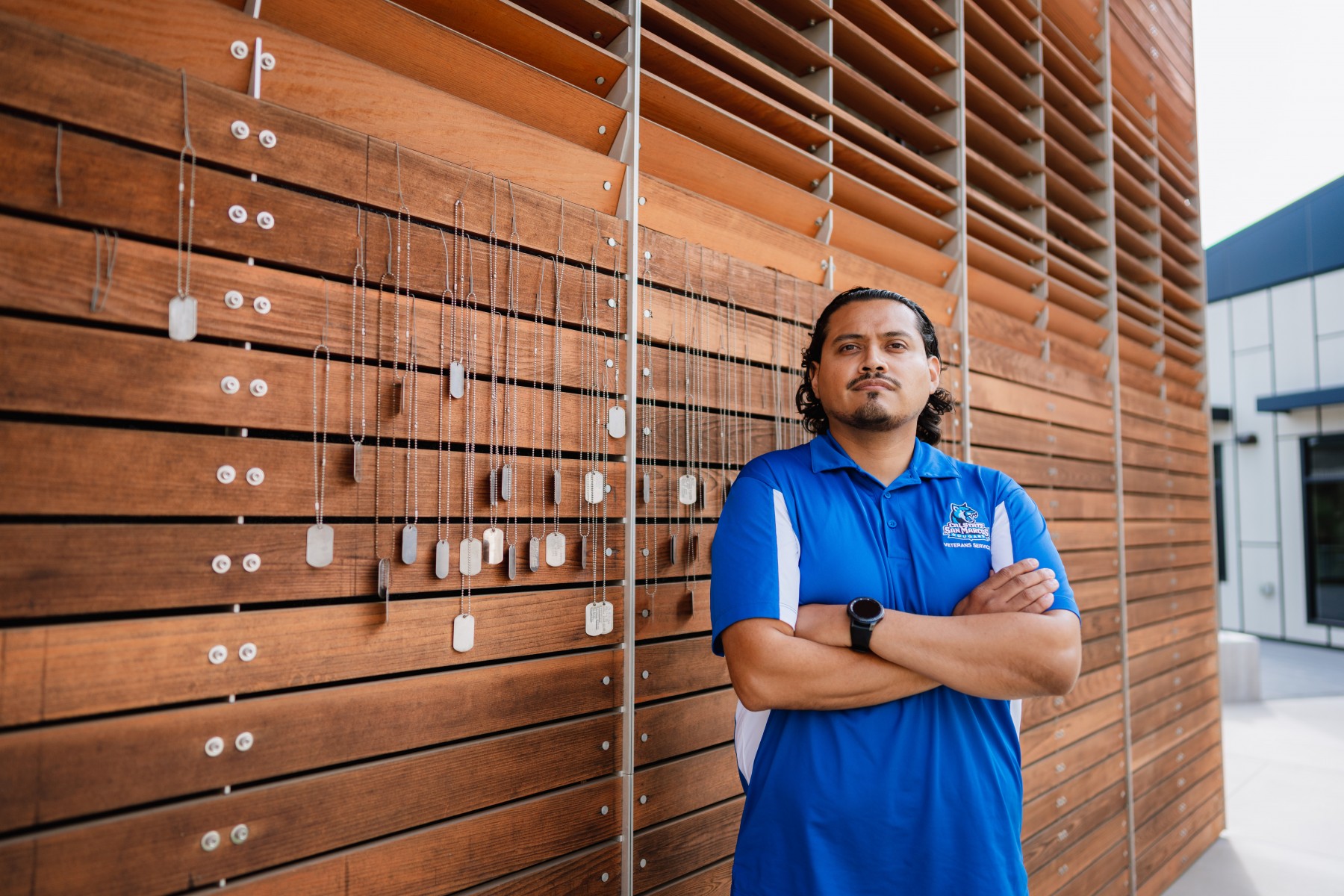 Like many Americans, Armando Manzo remembers the smallest details of where he was and what he was doing on the morning when terrorists steered two jet planes into the Twin Towers.

He was a high school sophomore in Chicago. It was Art 2 class with Miss Wood, who was one of his favorite teachers. The class was working on body portraits. They were using wooden figures, which reminded 16-year-old Armando of department store mannequins.

Miss Wood tended to turn on a television in one corner of the art room while her students were working on projects, and this morning was no exception. It was tuned in to CNN – just background noise for high school kids, really. From his vantage point, though, Armando had a clear view of the screen, and he happened to look up just as the first tower became engulfed in flames.

“I remember telling my buddy in front of me, ‘Dude, are you seeing this?’ And then everybody's attention was caught, and even my teacher stopped talking and giving us direction,” Manzo recalled. “We all turned to the TV. And I just remember there being dead silence and people gasping: ‘What is going on? Is this even real?’ ”

The otherworldly horror of Sept. 11, 2001 was all too real, and it affected Manzo profoundly. He wanted to drop everything and join the military right then and there, but for various reasons he waited until his mid-20s. He served in the Marines for almost a decade, including an eight-month stint in Afghanistan, before exiting in 2018.

Now a transfer student at Cal State San Marcos who’s on track to graduate next summer with a degree in business management, Manzo is in a reflective state. It’s a common sentiment, particularly among veterans, as the United States approaches the 20th anniversary of the 9/11 attack just after it completed its military withdrawal from the nation whose actions precipitated the longest war in American history.

Manzo will share his story, and his emotions, when he speaks during CSUSM’s annual 9/11 remembrance, which will take place Friday at noon at the Epstein Family Veterans Center. Members of the campus community also can attend the event via Zoom.

“It's definitely crazy that it's been 20 years,” Manzo said. “I think a lot of what went on in Afghanistan recently brings up those same emotions and thoughts and feelings that I had back in 2001. The fact that we were at war for 20 years, since that day, and everybody who not only we lost that day in our country, but everybody who I knew and people I didn’t know who we lost overseas in this war ... I've been having a hard time with it.”

Since he was only 16 when 9/11 happened, Manzo couldn’t enlist in the military right away, but he made a pact with three of his cousins – whom he grew up with in Chicago and regarded more as older brothers – to sign up as soon as they all graduated from high school. Because they were older, however, the cousins got a head start on Manzo. They joined before he could. They deployed before he could. They experienced the trauma of war before he could.

All three of them actively discouraged Manzo from following through on his plan, to the point that they wouldn’t help him connect with a military recruiter.

“They were like, ‘Nope, you're the one who actually has a chance to do something with your life. You're smart, you have personality, you can go to college. What we're dealing with over here is not for you,’ ” he said. “They were completely against it.” 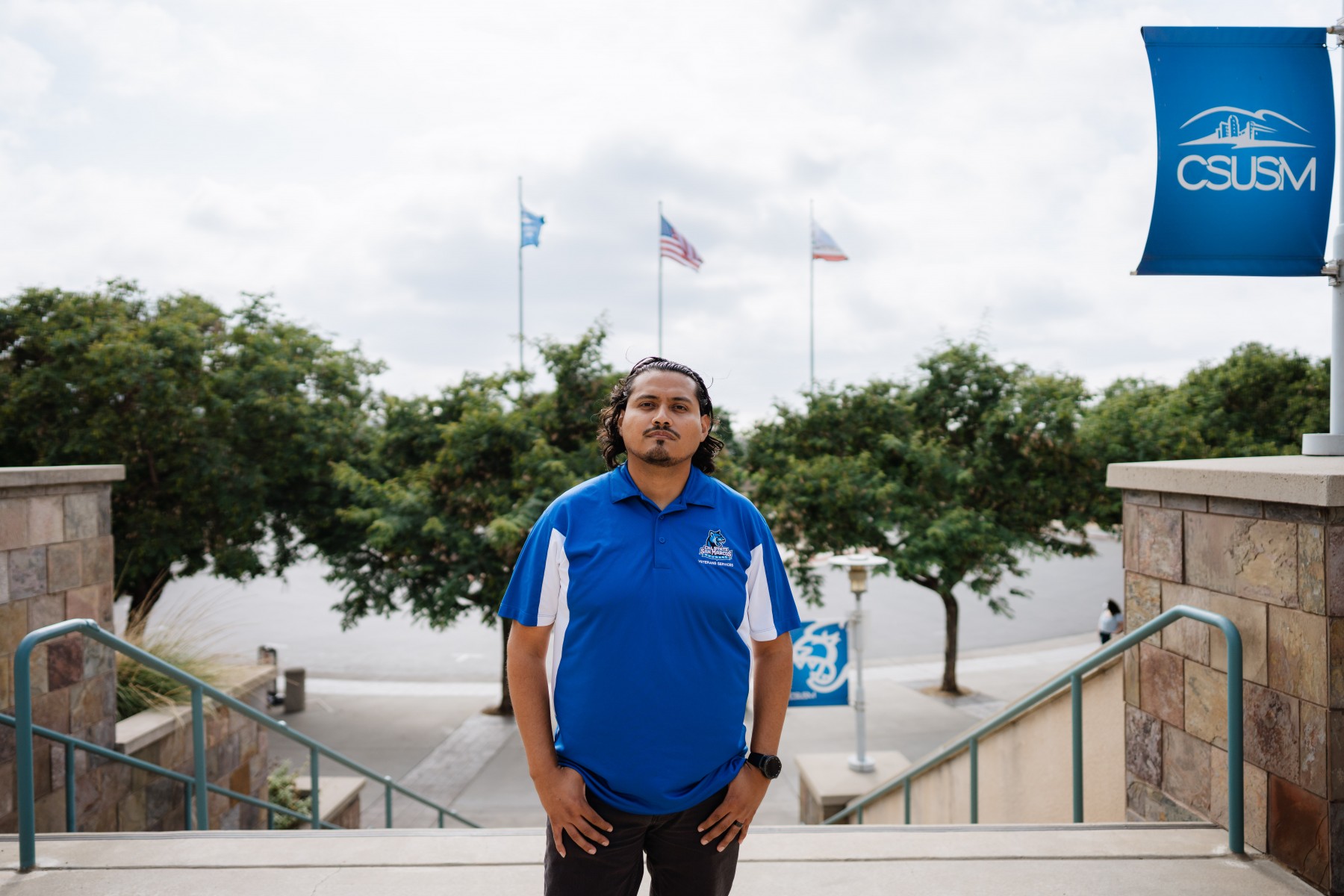 When he graduates from CSUSM next year, Armando Manza hopes to work for the Department of Veterans Affairs or a nonprofit that supports veterans. Photo by Long Truong

Manzo reluctantly heeded their advice and tried to chart a different life path. He enrolled in a community college to pursue a nursing degree. Deciding that was too difficult, he switched to a culinary school in downtown Chicago. Soon after, though, he found himself as a single father at age 21, so to provide for his baby daughter, he dropped education and at one point was working three jobs.

All along, that nagging feeling that he should be serving his country, doing his part to honor the memory of those who died on 9/11, lingered at the back of his mind.

“It took a toll on me for a long time,” Manzo said. “I could never really focus in school, always having those ‘what if’ thoughts in my head. There was some resentment. There was some envy.

At 24, eight years after the indelible moment, Manzo enlisted in the Marines. His cousins had relented by then, assuring him that the situation in the Middle East had calmed considerably. Seeking to make up for lost time, he threw himself into every task and rose up the ranks rapidly.

His deployment finally arrived in 2013. He was sent to Camp Leatherneck in Afghanistan as an administrative specialist. As Manzo puts it, the three things service members care about most when they’re deployed are their paycheck, their mail and their chow. He was responsible for two of them, for a unit of more than 350 personnel.

His duties isolated him from the worst of the violence, but he wasn’t immune from risk, as when he would deliver mail to forward operating bases.

“That was dicey,” he said. “Going through those villages, on convoys, man, you never know. You're a moving target.”

When Manzo returned from Afghanistan, he was assigned to Camp Pendleton, and while stationed there he reconnected with a woman he had known in Chicago. He married Anna Liza, a 2015 CSUSM graduate, four years ago, and they now have a large blended family of three boys and two girls in their Escondido home.

Manzo withdrew from the Marines to try college again in 2018, and after two years at Miramar College (where his wife works), he enrolled at CSUSM last fall. He’s in his second year of a work study program through Veterans Services, and he aims to become an officer in the Student Veterans Organization this fall. His goal after graduation is to work for the Department of Veterans Affairs or a nonprofit that supports the veteran community.

Every Thursday night, Manzo has been attending support group meetings at the San Marcos Vet Center for veterans of the wars in Afghanistan and Iraq. In recent weeks, the conversations have been especially raw as those who served in Operation Enduring Freedom process the end of the campaign in Afghanistan and openly wonder if their sacrifice was in vain.

“I've been trying to compartmentalize these thoughts and emotions, and it makes you really think about how this all started. Why did we do this?” Manzo said. “Forget 20 years. Every year that has gone by, it's like, we're still in it, we're still fighting. And then with what's going on now, I think about everybody who has been lost and affected by this, and it just sucks, to be honest. That's the only way I can describe it without getting too emotional.”